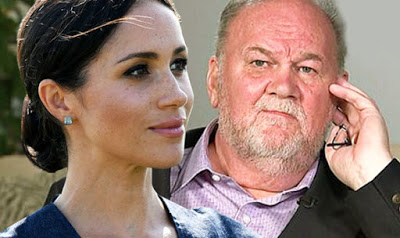 Royal aides are plotting to rein in Thomas Markle’s public outbursts about daughter Meghan, it has been revealed.

The Royal Family’s patience with him has finally snapped over his outbursts about Meghan and husband Prince Harry.

Advisers have held at least three top-level crisis meetings on how to stop the former Hollywood lighting director piling distress on his daughter, who has not spoken to him since the wedding 10 weeks ago.

It is also claimed the 74-year-old’s public ramblings about the Duchess of Sussex and the royals are now so out of hand the Queen may have to get involved to end them.

His most recent interviews include claims Meghan, 36, is “terrified” in her new role as a duchess and that Harry’s mum Diana would have “loathed” the way he is being frozen out by the Royal Family.

A source said: “Meghan is deeply hurt by what is happening and everything is being done behind the scenes to make sure her welfare is at the top of the agenda.

“It’s an increasingly desperate ­situation and now it’s come down to three options being on the table.

“The final option would be for Meghan to cut him off completely in the hope he will stop, but the ­situation is so precarious no one knows when that would be.”

There are fears if Meghan does make contact with Thomas he will reveal details of the conversation or sell his story.

Both Harry, 33, and Meghan are ­understood to be angry at a recent TV interview when Thomas revealed details of conversations with the prince, including his views on Brexit and US President Donald Trump.

The duchess was also said to be “deeply embarrassed and hurt” that her dad mentioned Diana.

The source added: “This could be the final straw for Thomas. A line has been crossed.”

Royal writer Phil Dampier said: “This is getting out of control. If this carries on I wouldn’t be surprised if the Queen herself gets involved and bangs a few heads together.”

Meghan has snubbed her dad ever since he received £7,500 for staging paparazzi pictures before her wedding.