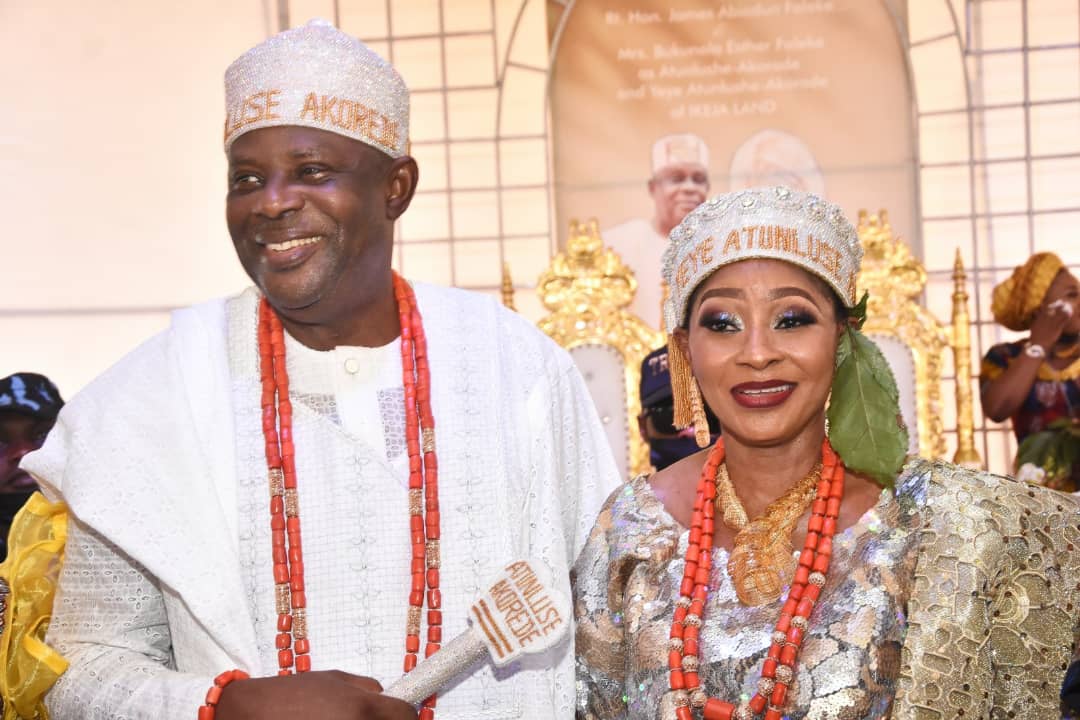 Last week, January 7th, 2022, the entire Ikeja axis of Lagos stood still for Rt. Hon. James Abiodun Faleke and his beautiful wife, Olubukunola Esther Faleke as they were both installed as the Atunluse Akorede and Yeye Atunluse Akorede of Ikejaland. It was a colourful ceremony that attracted some of the biggest political power houses in the land.

The Falekes were both honoured by the entire Oba in Council. They include HRM Oba Hakeem Saibu Agbaosi, the Ewe Obaja 1, the Alaguda of Agudaland, Oba Olusegun Adeyemi Ajasa, Olaside 1, Awise of Onigbongbo Kingdom and Oba Dr. Olukunmi Olusegun Akingbola, Ikuduro 1, Olu of Oregun. Hon. Faleke was looking dashing and resplendent in an impeccably white agbada made of top quality modern Aso-Oke fabric while his ever gorgeous wife was the cynosure of all eyes as she shone like a million stars in her iro and buba made of stunning Laser-Cut Aso oke fabric as well.

The speaker of the Federal House of Representatives, Rt. Hon. Femi Gbajabiamila led the high powered team of federal lawmakers who came to felicitate with one of their own. Not many were surprised to see the large turnout of ‘A’-list politicians who came from different parts of the country to honour the Rt. Honourable James Abiodun Faleke. Over the years, he has shown clearly that he is a man who holds an excellent relationship with many of his peers.

From the sitting federal lawmakers to the former, top senators, APC stalwarts, grass root politicians and regular card carrying members of his Ikeja Federal Constituency, Rt. Hon. James Faleke, relates very well with everybody. He never tires to spend his hard earned resources on members of his constituent, trying his hardest to ensure he brings the dividends of democracy right to their door steps.

This is why they all love him to bits. People of the grass roots don’t joke with him. And the elite politicians too have tremendous respect for him because of the dignified manner he has conducted himself over the years. For them, it is payback time for Rt. Hon. James Faleke and his ever adorable wife.
City People’s Senior Editor, WALE LAWAL (09054025857) was at the event to serve you gist of all that went down. He also had in company City People’s Head of Photo Desk, FEMI ADELEKE, Head, City People TV, SUNDAY ADIGUN and Photo Journalist, SUNDAY ADERIYE.

POLICE COLLEGE GROUND TRANSFORMED
After the coronation proper which held right inside the Onigbongbo Palace, Maryland, Ikeja and was conducted by the entire Oba in Council, the party train moved to the Police College ground in Ikeja. It was like a carnival of sorts. The entire field was over taken by a mammoth crowd, all gathered to celebrate a man they love and hold in high esteem. There were Marques everywhere, housing hordes of guests all dressed in the various shades of magnificent Ankara given out free to people by the Atulunse Akorede of Ikeja land and his wife. There was a live band out on the field entertaining the hundreds of guests while King of World Beats, King Sunny Ade, was the high profile artiste contracted to entertain the VIP guests inside the classy looking VVIP Marque. Give it to the event planner, the pretty looking CEO of FINESSE EVENTS, she did a remarkable job with the inside decoration and design of the Marque.

The idea was to give the place a look of royalty and she achieved just that. Her young, slim and cute ushers dressed in iro and buba aso-oke were simply brilliant. They were very effective. The sitting arrangement was top notch while the chairs arranged for the Atunluse and his wife along with their VVIP guests who joined on the high table were designed only for the royalties that sat on them.

SPEAKER FEMI GBAJABIAMILA DAZZLES
If you didn’t like the Rt. Hon. Femi Gbajabiamila before now, and you get the opportunity to meet him at the coronation ceremony of the Falekes, chances are that you would end up liking him a great deal. This is because he showed a side of him many probably hadn’t seen before. He was at home at the event. He was warm with everyone. Ever smiling and ever ready to say hi and greet as many as those who wished to touch flesh with him. But despite that he carried himself with no airs, you couldn’t miss the fact that this is a man of substance, easily one of the most brilliant minds to grace our political landscape.

ATUNLUSE AKOREDE RECEIVES AWARD FOR EXCELLENCE
Just before he took his leave, an Award for Excellence was presented to the Rt. Hon. James Faleke for his sterling performance as the Lawmaker representing Ikeja Federal Constituency and Chairman House Committee on Finance. The award was presented to him by the Speaker, Rt. Hon. Femi Gbajabiamila. The Speaker remarked that the word ‘Excellence’ leapt at him as he was handed the award plaque. He said the word ‘excellence’ quite perfectly befits the man of the moment, Hon. James Faleke. He went on to remind everyone gathered that the Atunluse Akorede of Ikeja land is the Chairman House Committee on Finance and he has done an excellent job so far. He stressed emphatically that the finance of the entire nation hangs on his neck, a responsibility not meant for the dull and frivolous.

YEYE ATUNLUSE STEALS THE SHOW
You must give it to the absolutely gorgeous Yeye Atunluse Akorede of Ikeja land, wife of the Atunluse himself, Yeye Olubukunola Esther Faleke. She did not disappoint those who were waiting to see how stunning she will look on her day. Remember she is a fashionista and style Icon herself. Though not loud by nature, yet she can’t help but make fashion statements every time she steps out at events. And she always chooses the events she attends, it has to be extremely important and top class.

At the chieftaincy coronation of her and her husband, expectedly, she had to go traditional, totally restricting her choice of outfits. But still, the very pretty, radiant and spotless Yeye stunned everyone when she turned out looking breathtaking in her Laser-cut aso-oke iro and buba. Her slim, fabulous figure totally blew the minds of everyone. Many couldn’t believe it when they learnt she is a mother of six grown up amazing kids, four girls and two boys who are not just doing pretty well already, but are clearly a source of pride to their parents who are exceedingly proud of them. Yeye was the cynosure of all eyes at the event as most female eyes trailed her everywhere she went, taking in her rare, youthful beauty, admiring her simple but exotic jewelry and glittering pair of shoes and wishing, silently, that they were in her place.

RT. HON. JAMES FALAKE, NO CHIPS ON HIS SHOULDER
Many were surprised to see the Atunluse himself, leaving the high-table several times to coordinate things, especially sitting arrangements for his guests. He didn’t want anyone complaining about being ignored. So he took it upon himself to sort things out. He clearly does not take his friends for granted.

EWI EXPONENT, EWEBIYI, THRILLS GUESTS
Popular Ewi exponent and songstress, Ewebiyi was at the event. She thrilled the guests with her rich ewi chants and regaled lovers of Yoruba culture with the uniqueness and richness of the Yoruba Ewi chant. She was simply a marvel. She held everyone spell bound with her deep knowledge of the different Ewi chants unique to the various Yoruba speaking tribes. And she was appreciated with loads of cash too.

EWEBIYI GIVES SENATOR MAGNUS ABE YORUBA ORIKI
Former Senator Magnus Abe, who was one of the VIPs at the event was spotted by Ewebiyi while she was busy serenading guests at the event. She told the former distinguished senator Magnus Abe from the South east senatorial district of Rivers State that she was going to give him a Yoruba Oriki and she came up with something from his Rivers background. Unfortunately, the Senator barely understood a word of the Oriki, so he could only smile and appreciate Ewebiyi with some crisp naira notes.

WHITE CAP CHIEFS PRAY FOR THE ATUNLUSE AKOREDE OF IKEJALAND
The white cap chiefs stormed the event looking regal and eye catching in their all white traditional outfits. They were there to represent the Oba of Lagos, Oba Rilwan Akiolu and were also there in their own various capacities. Just before the Atunluse and his wife stepped out to dance, a handful of the white cap chiefs took turns to pray for Rt. Hon. James Abiodun Faleke. Their prayers were deep and profound as they all wished him well and prayed that his coronation as Atunluse will herald for him bigger successes and elevation.

KING SUNNY ADE, IMPRESSIVE AS EVER
The King of World beats was at his impressive best. He got everyone grooving and dancing to his beats effortlessly. Many were stunned to see that at almost 80, he could still move and dance spritely like a man in his 30s. His evergreen songs got everyone, including the Atunluse and his wife, glued to the dance floor for a very long time.

Fantastic gbenga adeyinka the 1st
Whoelse would’ve been a perfect fit for a compere for an event of such magnitude and top political class if not the undisputable number one comedian of the Federal Republic, Gbenga Adeyinka the 1st. He did such a remarkable job co-ordinating the event and ensuring there were no hitches whatsoever.

RT. HON. JAMES FALEKE THANKS KSA
Minutes before he and his wife stepped out to dance, the Atunluse Akorede of Ikeja land took time out to thank the King of World beats, King Sunny Ade personally. He said he called KSA only a couple of days before the event and he agreed to come and perform, cancelling all previous engagements. He was profoundly grateful to the king.

BONIX DRINKS WOWS GUESTS
The pretty ebony and enterprising CEO of Bonix Drinks impressed everyone with her top quality service. She is such a delight to watch while on duty attending to guests at events. Her courteous and friendly approach endeared many to her. If you needed her services, and was looking for one of her attendants, she would promptly attend to you herself and ensure you are well taken care of. It was no wonder dozens of guests were requesting for her contacts at the event. And of course, her drinks, as usual, were thoroughly chilled and met the satisfaction of everyone.

My Personal Ambition For 2023 Is Makinde’s Re-election — Olatubos