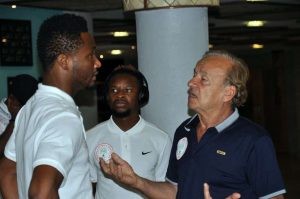 Super Eagles captain, John Obi Mikel and his deputy, Onazi Ogenyi, are reportedly on a collision course in camp ahead of the Russia 2018 FIFA World Cup.

According to the Sun, both players are no longer on talking terms and the tussle for leadership is distracting other players in camp. A source in the camp says the friction is largely due to Onazi’s refusal to take orders from Mikel.

“If we must do well in Russia, the NFF must ensure they resolve the wrangling between Mikel and Onazi. Both players I can confirm are not in talking terms and this could cost the team at the World Cup. As we speak, the tussle is a big distraction for the team. Some players have also pitched their tents with either Mikel or Onazi in the struggle. Though, the reason for tussle is not known yet but some people felt it was due Onazi’s insistence on not taking orders from Mikel,” the source said

The source who is also a footballer, added that Ahmed Musa has joined Ogenyi Onazi  in his fight with Mikel.

”It is a pathetic situation but we have to live by it. Musa and Onazi have formed their own group and they avoid anything with those of us loyal to Mikel. They (Musa and Ogenyi group) see us as threats in camp, so they prefer to avoid or make you feel you’re not wanted. Such spirit, I believe is not good enough for a World Cup bound team”.