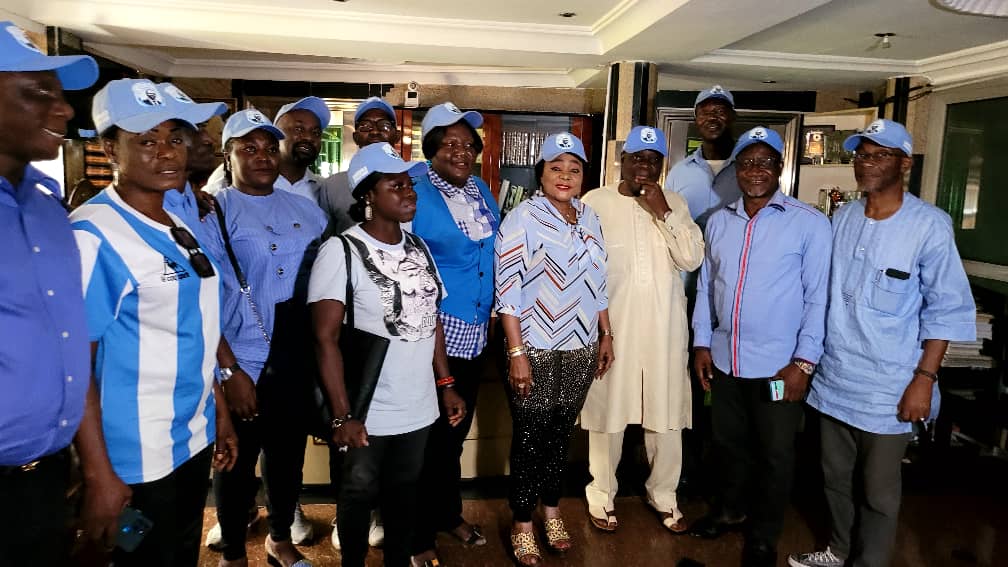 The pro Sanwo Olu group in Lagos popularly known as Sanwo Olu Ambassadors in continuation of its door-to-door sensitisation call paid a courtesy visit to the Chairman, MiTV and Star 101.5 FM, Chief Muri Gbadeyanka and his management team at the Alausa Office of the stations on Tuesday, 20th September, 2022.. The entourage majorly the EXCO members and LGA/LCDA coordiators was led the Director General of the group Amb Hajia Tai Elemosho-Okesanjo.

The Director General of the group, Amb. (Hajia) Tai Elemosho-Okesanjo, spoke about the mission of the group as being the major achievements of its principal, Gov. Babajide Olusola Sanwo-Olu, in the past three and a half years as the attractive forces behind the formation of the group. She stated that the group’s visitation to MiTV was to solicit for support from the management and members of staff of the stations by amplifying the achievements of the governor in promoting his re-election bid as Lagos State Governor and that of the National Leader and APC presidential flag bearer , Asiwaju Bola Ahmed Tinubu as the next president of Nigeria.

The State Coordinator, Amb. (Otunba) Hammed Gafar, while speaking enumerated the laudable achievements of Gov. Babajide Olusola Sanwo-Olu as the endearing factors that motivated members of the group to team up to promote his re-election bid come 2023.
The State Coordinator mentioned that the group has been engaging in activities which has the THEMES Agenda of the Governor as its focal points. He mentioned that part of their recent activities included the Health Outreach tagged HEALTH DIAGNOSIS/TALKS held to ensure that Lagosians live a healthy life with free diagnosis, accompanied with mouthwatering gifts items to the beneficiaries, from the 20 LGAs of the State, courtesy the governor.

Amb (Otunba) Hammed Gafar informed Chief Gbadeyanka and his team that as a means of reaching out to the grassroots, its group also recently inaugurated the Coordinators and their Core EXCO members in some forty-five LGA and LCDAs of the State. He assured the Chairman that efforts are in place to continue increasing the membership strength of the group upwards from its present over twenty-five thousand party faithfuls at all the LGA and LCDAs of the State in a short while after its creation. Otunba Gafar assured Chief Gbadeyanka that the door-to-door Sensitisation visits would take the group into the campaign proper by visiting every resident of the State with the conviction that Sanwo Olu. should be re-elected with a landslide victory.

In his response, Chief Gbadeyanka was appreciative of the group initiative deeming it fit to intimate him and his team with the sensitisation process. He was of the conviction that Gov Sanwo Olu would be re-elected as a result of his remarkable achievements in office these past 3½ years. He, however, cued into the group’s goal of re-electing the Governor with landslide victory. He equally expressed his beliefs in the high competence level of Asiwaju Bola Ahmed Tinubu in turning the fortunes of the people of the country around for good if elected as the next president of Nigeria. Chief Gbadeyanka recalled that the governorship agenda of the Asiwaju was hatched in his office backed then in the days preceding the Asiwaju’s election as the State governor in 1999.

While thanking Chief Gbadeyanka for receiving her team, Amb. Elemesho-Okesanjo seized the opportunity to invite Chief Gbadeyanka and his team to collaborate with the group in ensuring that the forthcoming event themed LAGOS PRAYS which holds on Wednesday, 5th October, 2022 turned out a huge success. She maintained that the interreligious prayers were meant to usher in peaceful electioneering campaigns while seeking the face of God for the huge success of all the candidates of the ruling party, the APC, in the general elections most especially those who their principals, Governor Babajide Olusola Sanwo-Olu and Asiwaju Bola Ahmed Tinubu as the governor of Lagos State and president of Nigeria respectively come 2023.