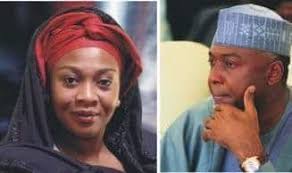 She also pledged her commitment to the success of the All Progressives Congress (APC) in the state and across the country in the 2019 elections.

Gbemisola made this known in a statement released, after her brother dumped the APC and returned to the Peoples Democratic Party (PDP).

“I maintain my unwavering support for President Muhammadu Buhari, now and for his re-election in 2019, and for the success of our party, the APC, in Kwara State and across the federation.

“All members of my political organisations including GRS Movement (GRSM); GRS Foundation (GRSF); GRS Friends on Facebook (GRSFOF); Paramount Women Forum (PWF) and GRS Grassroots Youth Movement (GRS-GYM) will begin to implement the first phase of our “Get-Out-The-Vote for PMB and APC.

“Politics is a public service to the people and we ought to conduct it with dignity, peace and love for our fellow citizens.

“May Allah grant us direction, guidance and restraint in our utterances and conduct,” the statement read.