See the Nigerian Woman Cured of Rare Cancer in India 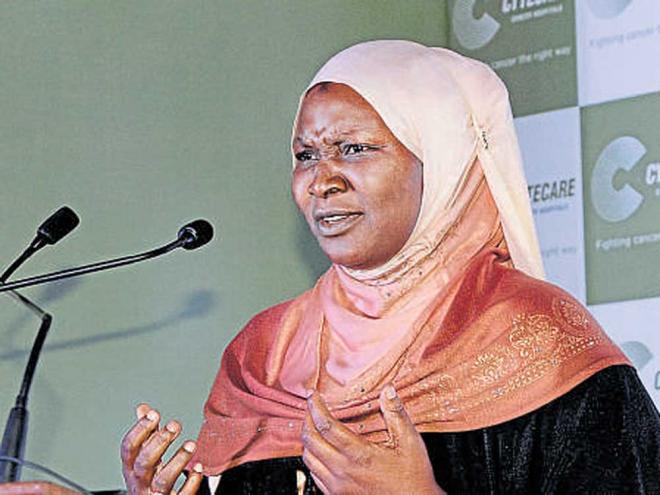 After struggling for more than three years after being diagnosed with breast cancer in 2014 at a Nigerian hospital, a female final year medical student, who was not sure that she will survive, has been cured.

Thirty seven-year old Nigerian woman, Amina Abubakar was not sure that she will survive after being diagnosed with breast cancer in 2014 by a Nigerian hospital.
But it was a wrong diagnosis for Amina, who was a final year medical student. As it turned out, she was actually suffering from skin cancer.
After struggling for more than three years, Amina can now breathe easy. Thanks to the treatment that cured her at a city hospital in Bengaluru, India.
She was bed-ridden for more than three years under heavy antibiotics and other cancer treatments.
But the last 20 days made her recover miraculously. That is after the doctors removed a 5 kg tumour from her breast.
Amina said, “I found a lump on the left breast in November 2014 and then was diagnosed as chronic mastitis in local hospital in Nigeria. I have suffered Wrong diagnosis and lack of treatment for years. I was physically and mentally broken and was unable to deal with the pain and the foul smell that comes with cancer.”
Unable to find any cure in Nigeria, Amina, whose father was also once treated in a city hospital, decided to travel to Bengaluru.
“My family and I got very anxious about this situation and on the recommendation of a local doctor decided to visit Dr Anthony Pais at Cytecare for treatment. But it wasn’t easy for the city doctors to cure her as the disease was rare.
“Skin cancer on the breast and infiltrating it is the rarest of the rare cancers in the world. This was the first treatment for a rare form of skin cancer – Syringocystadeno carcinoma paplliferum, which was diagnosed and treated in the world. It is one such case where the right diagnosis was the game-changer in the treatment of the disease,”claimed Dr Anthony Pais.
“There are two types of skin cancer – melanoma and non-melanoma, most of them being non-melanoma. Among all the non-melanoma skin cancers, 75% of them are basal cell cancers; 20% of them are squamous cell cancers and about 2% of them being adnexal skin tumours. Most of these adnexal tumours are benign.
“The rarity of this adnexal skin cancer involving the breast is the rarest of the rare cancer. In this case, the problem started with the wart and with a birthmark close by, which is technically called a nevus. This grew over a period of time.”
Amina, who got a new lease of life, will head for Nigeria this Saturday. She will continue a follow-up at a local hospital for a couple of months more.
Source: Bangalore Mirror
See the Nigerian Woman Cured of Rare Cancer in India was last modified: June 25th, 2017 by Arinze Ago