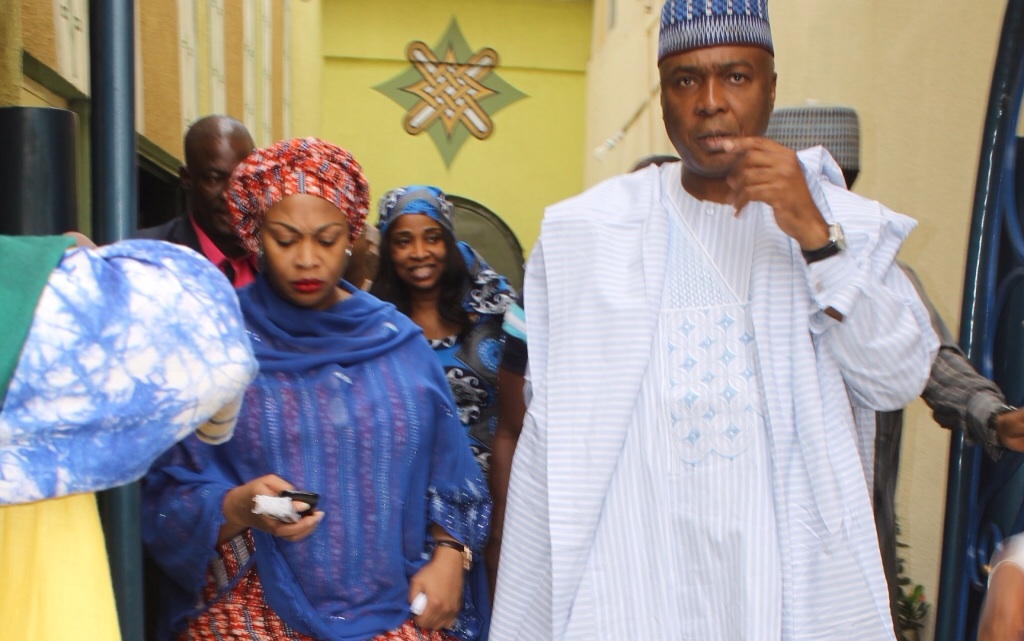 Senator Gbemisola Ruqayyah Saraki is the junior sister of Senate President, Dr. Bukola Saraki. The big news is that she is running for Kwara Central Senate seat, which is the same seat her senior brother currently occupies.  And she is dead serious about it. She is aalready workingon how to defeat her brother at the polls, if he decides to run for Senate again.

But Dr. Bukola Saraki’s aides say he is not worried about Gbemi’s moves. This is because he believes he is fully in control of that senatorial zone. Gbemi also feels she will beat her brother to it this time around. She is 53.  She and her brother are from the same parents, made  up of  her father, late  Dr. Olusola Saraki of Kwara State, the Senate Leader in the Second Republic and a Christian mother, Florence Saraki, who hails from Ondo State from whom she imbibed her impressive work-ethic and passion for social issues.

Gbemi Saraki, attended the prestigious Cheltenham Ladies College, Cheltenham, Gloucestershire, England between 1972 to 1982. Encouraged by the sterling performance of their young kid in her elementary school, the Sarakis enrolled their gifted child in another internationally acclaimed college, this time, Brook House College, Market Harborough, Leicestershire, England between 1982 to 1984. She thereafter gained admission into one of UK’s first generation universities, the University of Sussex. Ever since its creation, Sussex has grown to become a leading teaching and research institution across the globe. Quite naturally, she had a memorable stay in the university, breaking new grounds and making friends that have till today remained part of her life and family.

From a sterling academic foundation which saw her traverse the length and breathe of the world in pursuit of academic laurels to a rich background in the private sector as a banker and expert in insurance brokerage, Gbemi has carved a niche for herself as a technocrat of repute in Nigeria.

But not one to jettison the plight of her people. She answered the clarion call to represent her constituents at different times, since 1999 when the present democratic dispensation berthed. She consciously left her comfort zone as a topnotch Executive Director of one of Nigeria’s best paying private companies to venture into the murky water of politics of the country. She was at separate times in both the Green and the Red Chambers of the National Assembly as a member, representing the Ilorin West and Asa Federal Constituency and later, as a Senator representing the Kwara Central Senatorial District.

And quite naturally, after a successful stint at the National Assembly, she emerged as the Best Female Legislator, with the highest number of bills presented and got passed into law by any female in the political history of Nigeria.

Before venturing into  politics, Senator Gbemi Saraki enjoyed success in the private sector, gathering experience in various capacities. Upon completion of a Bachelor’s degree in Economics from the University of Sussex. She returned to Nigeria for the National Youth Service Corps.

She served at the Nigerian Bank for Commerce and Industry, Lagos, with duties which included loans assessment and disbursement as well as credit analysis and risk management. She continued to gain banking experiences with the Societe General Bank (Nigeria) Limited, initially as Head of Money Markets and later of Domiciliary Accounts. She later resigned and moved to Ashmount Insurance as director. She got married and started a family.

When democracy returned to Nigeria in 1999, Gbemi Saraki joined active politics. She was elected as a Honorable Member of House of Representatives under the banner of People Democratic Party. She built her unique political career on core value of positive impact in the lives of her people and of course her state, Kwara. She headed different committees and she further enlarged her understanding the dynamics of governance and the interrelationship with leadership as a fulcrum of building a better nation. Among others, she was an active member of many House Committees.

In 2003, the  people of Kwara Central upgraded their trust in her leadership and voted her as a Senator of the Federal Republic of Nigeria. She was re-elected to the Senate for the second term in 2007.

She was also a returning member of the ECOWAS Parliament.Legislative experience in the House and the Senate, chairing and membership of the divergent committees and a broad life experience have enabled GRS to develop a deep understanding of the critical issues confronting Nigeria.

Senator Gbemi Saraki  is blessed with extraordinary drive, stamina and a daunting work-ethic as evidenced by her legislative track-record. This hard-working Senator has presented many bills to the Senate since 2003.

By the end of her public career at the Senate, Senator Gbemi Saraki had sponsored 13 Legislative Bills making her one of the most active Senators in sponsoring bills that added quality values to our democracy. Also of note is the fact that her constituency, Kwara Central, had the highest numbers of constituency projects in Kwara, courtesy of Senator Gbemisola Rukayat Saraki. She built a wide political network especially as a grassroots mobilizer.

In 2011, she contested for the governorship seat of Kwara State. She was very concerned about the patterns of delivering good governance; enamored by her political experience; and buoyed by the understanding of the genuine needs of her people. Under the Allied Congress Party of Nigeria. She contested and came third in the election. She is now set to contest again.

Senator Bukola Saraki is older than her, by 3years. He has been Senate President since  June, 2015,