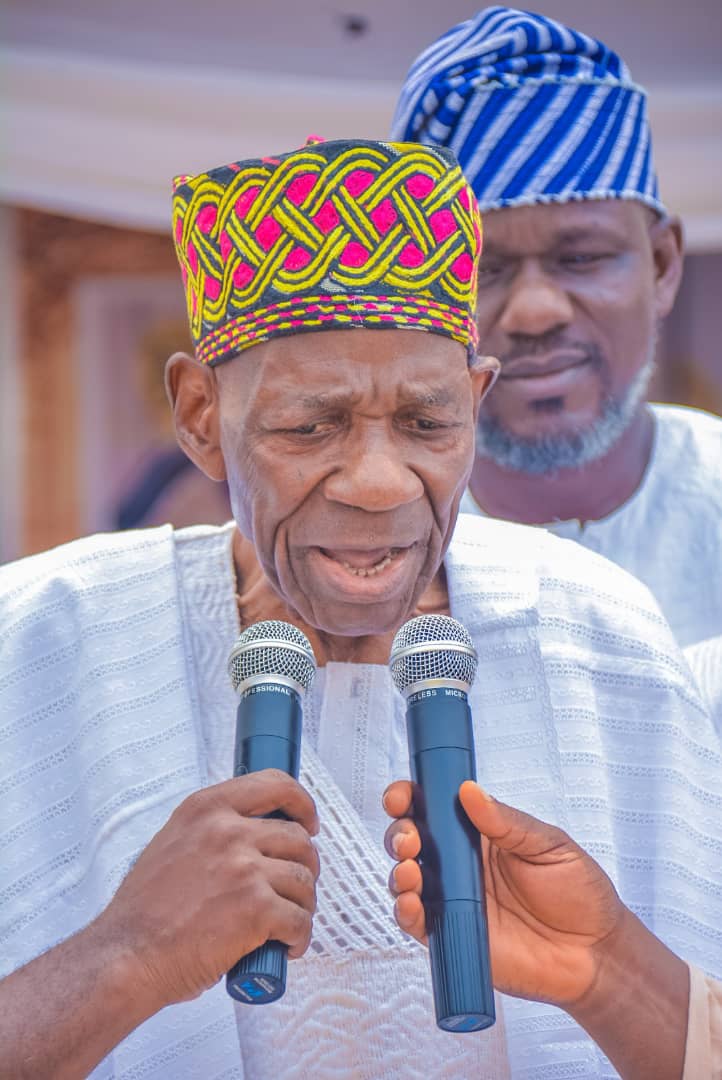 The entire Muslim community in Aiyepe-Ijebu in Ogun State and other adjoining towns gathered at the residence of the Shittu’s on old Ikenne road, in Aiyepe On Sunday 15th May, 2022 to hold the 8th Day Fidau for popular Ijebu industrialist, Alhaji (Prince) Shafi Mobolaji Shittu, the 1st Baba Adinni of Aiyepe, who died a few months after his 90th birthday.

The  programme was organised by his Children, who turned up in colourful aso ebi and the men wore white Agbada with Aso Ebi Fila. All his children were on their feet throughout, making sure  the event went well. The Shittu family members also rallied round the children to make the event grand. The Programme was scheduled to take off at 10am. And several minutes to the scheduled time, exotic cars had filled up all the adjoining streets leading to the venue of the prayers. A gigantic white marquee was erected on the field, inside the sprawling compound of Alhaji Shittu, who was the founder of Aiyepe Lace factory, which put the sleepy town on the world map in the 70s. All the Imams and Alfas in Ijebu, all converged to pray and give testimonies about the life well spent of this accomplished industrialist.

The programme of Events had 11 items, each of which was taken in quick succession.

First, was the Opening prayers, followed by the Introduction of Royal fathers, distinguished guests and Imams. The 3rd item was Reading from the Holy Quran, then the reading out of the Biography of the deceased,  by one of his pretty daughters, Nike Shittu, who lives in the US.

The 5th was the Waasi (Sermon) delivered by Shehu Liadi Lawal (Omo Baba Oshodi) who came from Lagos to join other Imams from Ijebu. He commended the contributions  off the deceased to the growth of Islam in Aiyepe and Ijebu. He also advised the children to keep alive the legacy of their father. The 6th item was Brief Fidau from some Islamic scholars. The 7th item was Khutubah, (donations) to raise funds for the upkeep and refurbishing of the Aiyepe Central Mosque. The 8th item was, Tribute titled The Baba Adinni that I knew, by some dignitaries and the children. One of his lovely daughters, Adunola Animashaun spoke well of his late dad. The 9th item was Sadaqat Jariya, the speech by the Shittu family, to announce their donation, for Aiyepe Central Mosque, in honour of Alhaji Shafi Shuttu. The children announced that they were going to reconstruct the landscape around the Central Mosque compound, to give the mosque a befitting look. This was followed by Vote of Thanks & Closing Prayers.

After the Fidau Prayers, all the children of the deceased entertained their guests in the separate tents they had provided within the compound. It was a grand event, as the Shittu family played host to about 3,000 guests, many of whom are members of the delegation from the various Muslim societies, in and around Aiyepe.

There was so much to eat and drink, as over 10 Caterers provided different delicious delicacies, to supplement the main Caterer that the family had hired to provide food. As guests were overwhelmed with the variety of food served, drinks flowed ceaselessly. Everybody had more than enough to eat and drink. Alcohol was not served. There was tight security all over and so many celebrities converged on Aiyepe to support the Shittus, who command a lot of goodwill, on account of the good deeds of their late dad.

15 Signs A Woman Wants To Sleep With You

Help! I Am In Love With The Wrong Guy!