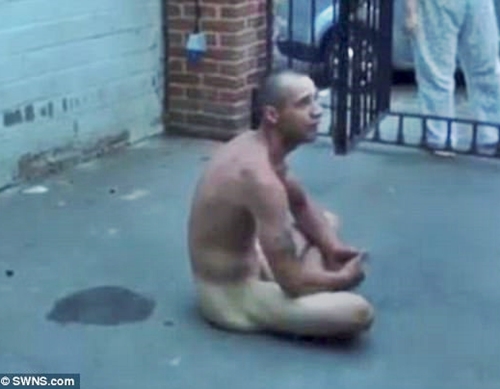 Muslims were forced to barricade themselves in a mosque after a racist man stripped n*ked and shouted abuses before climbing a crane and exposing himself, Dailymail UK reports.
Dan Morrison was filmed singing ‘I’m Catholic till I die, and Christian as well’ before shouting racial slurs at worshippers. He shouted at nearby residents before going into the mosque’s grounds, taking his clothes off and chanting.
The 26-year-old was arrested for the hate crime outside Folkestone Mosque, Kent, around 9pm on July 7.
One witness described the incident as like ‘a bad dream’, and said: ‘Fear started to sink in as he was stripping n*ked and threatening to use violence. ‘My friend got hurt when he was trying to stop the man from entering the mosque. The man got extremely upset and he started to climb up the construction crane.
‘My friend talked to the man and eventually managed to get him to climb down the crane and put his pants on.
‘The man started crying. The police eventually arrived and he was arrested.’
Morrison pleaded guilty to a charge of exposure and two further charges of racially aggravated behaviour and religiously aggravated behaviour.
Magistrates in Medway sentenced him to 26 weeks in prison and ordered him to pay a £115 victim surcharge.
Shock as Muslims Barricade Themselves in Mosque as Naked Man Sits Outside Shouting ‘I’m Catholic Till I Die’ was last modified: July 21st, 2017 by Arinze Ago

Why Prophet NIYI OLOWOPOROKU Is Popular Across...