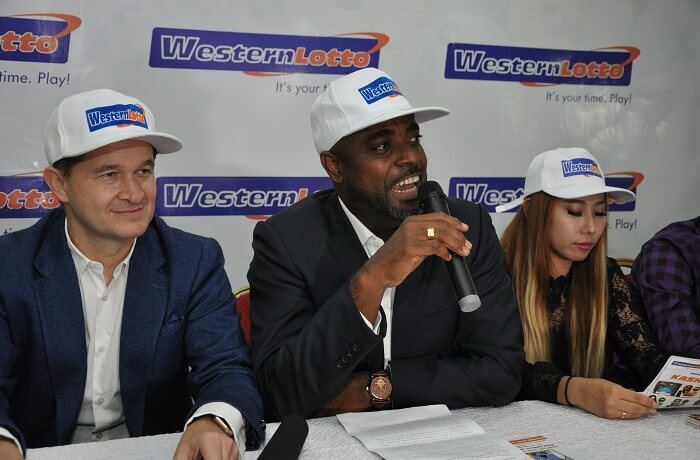 The firm is probably fewer than five months old in the market, but it has made such, a massive impact that many seem to have forgotten that it is the newest entrant in the lottery industry.

Western Lotto is the newest bride in the Lottery business, but judging by the remarkable ground it has covered in terms of market share, considering that it began operations only a short while ago, and it is already giving the big brands a run for their money is like stating the obvious.

The momentum, as well as its expansion of its market share at the moment, is incredible as more and more lottery players are boarding the Western Lotto train. It has brought in games from the United Kingdom, the United States and Europe and these are games that are already known and established globally. Tons of showbiz stars’ support have also helped the brand leap into eminence and reckoning.

At the recent City People Movie Awards, where the Western Lotto team was well represented, City People’s WALE LAWAL spoke with the MD, Mr. Yomi Ogunfowora, and the very calm and articulate gentleman opened up on how Western Lotto has been able to break down all barriers to become one of the biggest lottery names in the industry within such a short while.

Before we go into discussing Western Lotto with you, sir, please share with us your impressions of the Nigerian showbiz industry..

Well, the Nigerian showbiz has guided some of us from our youthful age to wherever we are now. Going back to the days of the Baba Salas, the Jacob and Papi Lolos, and stuff like that, I could recall that growing up, we were very much into these entertainers and I know many lessons we ended up picking from most of them. So, I think that, without mincing words, yes, they’ve done well, but we can do better than what we’ve achieved so far. To me, it’s nice for them to be celebrated this way, but sincerely as I said before, I think the potential are there and the beauty about it all is that the industry keeps bringing out newer and newer people to make us not to miss the old ones who are gradually leaving the stage. It’s a fantastic feeling, I’m sitting with a legend here (referring to Paul Obazele who was sitting right next to him)

How would you say the idea to bring showbiz personalities to endorsing the Western Lotto brand has paid off?

Sure, the idea to partner with showbiz personalities, particularly those who have made impact in the industry, has been quite effective. We are actually riding on their backs. It’s about acceptability. We also are particular about trying to deliver on our promises and those who have been in the entertainment industry and have done well, over the years, are the best to ride with because they have the brand, they have the strength, they have the quality for us to ride on their back. So, the partnership, to us, is not a rocket science, it’s just the best way to go, that’s why we’ve done that.

Many people are amazed at the momentum Western Lotto has gained within its very short entry into the market, how have you been able to achieve this within such a very short time?

Well, we had a strategy and I can say that we’ve kept to the strategy and we believe that the strength in this business is about your ability to deliver on your promises. As much as possible, we have delivered on our promises and we have also turned  some of the weaknesses of competitors into strength, as a way of forging ahead. I don’t think its right for me to bring out my winning formula, but I can tell you we have our strategy and we perfectly executed that strategy to get us to where we are.

One major challenge that many outfits in your line of business have always had to battle with  is credibility and integrity, but you didn’t seem to have this problem from the out- set. What did you have in place that dealt with this challenge right from the start?

I will go back and say it’s a strategy. We started by bringing in international products that have credibility globally. UK Lotto from the UK, Power Ball and Mega Ball from the U.S., Euro Million and Euro Jackpot from Europe, those are household lottery games everywhere in the world.

We have brought them in. We have brought them to the level of understanding and credibility that’s important to the public by making sure that they take responsibility for the winnings. So, mostly, they make the winnings happen. And so, credibility, being the strength of the business is what we have built on and we still believe we can do better. Credibility is the name of the business, you get it right and every other thing just falls into place. This is why we are looking for the big established stars, who are credible and on whose back we can ride on, knowing full well that, as a school of thought believes, that your word is your bond, that is the biggest level of credibility anybody can have. We have given our words to them to say, see, give people our words out there, we are with you, we won’t let you down, and that’s the way it’s been. We have not let them down.

As a journalist, I know for a fact that there are still thousands and possibly millions of people out there who are desirous of being a part of the Western Lotto winnings team, but find it difficult to understand the rudiments of the game and would love to have a platform where the games can be explained to them in simpler language, what are you doing in that direction?

When Western Lotto first came out, we came out as a pure online platform. We knew that there’s a catchment of the market that’s not being tapped into yet. The mentality around the world is that, especially if we dovetail into Nigeria, the thinking is that lottery is for the downtrodden people, such as the people in Mushin, the Agege, the Ipaja.

But that is not true and we were determined to prove that it’s not true. So, our target and mission was to create a new level of players, get them to understand how to play the game and then also reach out to those that know how to play and are desirous to play, and that is exactly what we’ve done. So, in the next couple of weeks, you’ll see us rolling out our outlets where people can walk in, make enquiries and enter for the games.

What we have now is a 24 hours online customer service where you can call in and ask questions. We have trained many people who can respond to your requests in nearly every major Nigerian language. We also understand that there is this apprehension about online dealings, but I can assure you we have done exceedingly well to assuage fears. Having said that, we also know it’s about time we take Western Lotto to the people, and I can tell you in the next few weeks, you’ll see that happening.