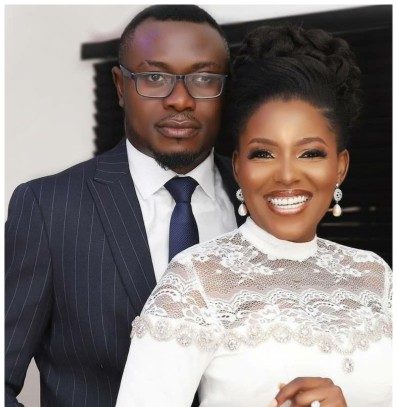 •How She Fell In Love With SEYI AKINRINDE

Prior to that, the couple already had their court wedding at Ikoyi Registry on Tuesday 27th April, 2021, with family members in attendance and very few close friends and colleagues in the industry. Then afterwards, they had their church wedding ceremony on Thursday morning 29th, April 2021 at Gracevile Chapel Church at Allen, Ikeja with family and close friends in attendance. With the bride looking gorgeous as ever in white outfits for both the court and church ceremony, her husband complimented her in black suit for both ceremony.

Biola Adebayo is one actress that despite her fame and success in the movie industry, she enjoys her private life and would not trade it for anything. And that explains why her wedding was not just a simple one but strictly for family members and close friends in the industry were also invited.

Over 30 A-list movie stars gathered at the reception to celebrate the delectable actress.

Though, she didn’t pick a particular Aso-Ebi for the party, but there was colour code for the party. It was an all white affair with a gold gele to complete the looks for all guests.

The venue for the reception was beautifully decorated in white and gold with touch of love. It was beautifully planned by popular celebrity event planner Taiwo Bankole, the CEO of Strictly Eventsng.

The couple changed into three different beautiful outfits, one for the traditional rites and two for the reception and party proper.

Multi-talented and multiple award winning gospel musician, Tope Alabi stole the show, with her special performance to celebrate the couple.

Star actress, Biola Adebayo popularly known as Biola Eyinoka does not need much introduction to many lovers of Yoruba movies.

She became popular from the movie “Eyinoka” and she has been acting for close to 2 decades with loads of awards home and and abroad. She started off her career in the movie industry featuring in English series, especially with Wale Adenuga’s productions before going into the Yoruba movies fully.

This beautiful actress is one that always states categorically that she is not desperate for marriage and will settle down at the right time, which she eventually did.

The groom, Seyi Stevens Akinrinde is a successful Lagos big boy who is not popular on social media and operates a very private life.

THE COUPLE REVEALED WHAT ATTRACTED THEM TO EACH OTHER

It is a known fact that the couple didn’t have to court forever before walking down the aisle and in the course of the ceremony, they both revealed what attracted them to each other. According to Seyi Akinrinde the first thing that attracted him to Biola was her contagious smile, then secondly that she is amazingly beautiful. Also that if you get closer to her and understand her personality, you will get to know she is blessed with a good heart as well.

He loves her personality a lot and it got to a point that he discovered that they have a lot in common and he sees himself in her. And that was why he decided to spend the rest of his life with her.

Biola Adebayo on her own part says, she can give up everything in life but can’t give up someone who truly loves God. He is a Christian and not just a Christian by mouth but a Christian by heart. Also that he is very intelligent and smart.

And above all, he is God’s gift to her and she will always love him.

The wedding ceremony started on Tuesday, the 29th of April with a court wedding at Ikoyi Registry, where the couple took their oath in front of close family members and few friends in attendance.

The bride looked beautiful in a white jump suit while the groom also looked handsome in a blacksuit. Then on Thursday 29th April, 2021, they had their church wedding ceremony at Graceville Chapel on Allen, Ikeja with family members and few friends in attendance, with the bride looking like Princess in white gown and hat while the groom wore a black suit to compliment her look. Then they proceeded for the traditional rites where they both looked gorgeous in blue and silver native and royal beads to compliment their looks.

Then finally later in the day, they rounded up the ceremony with the reception at Gradeur Event Centre at Ikeja.

GBENGA ADEYINKA WAS THE OFFICIAL MC AT THE EVENT

Highly respected stand up comedian, Gbenga Adeyinka the 1st, was the official master of ceremony. As many know, Gbenga Adeyinka knows his onions, when it comes to coordinating an event. He did it perfectly and carried everybody along without any dull moment.

Highly respected and award winning gospel musician, Tope Alabi stole the show at the party with her superlative performance. Many know Biola is one actress that adores Tope Alabi a lot so performing at her wedding is definitely one of the best gifts, she could have ever asked for . At her wedding, she sure made her day with her performance, most especially with Bola and other celebrities present singing to her different songs, she performed at the wedding reception.

She was equally looking ageless as ever in her white and gold outfits.

THE ARISTOS BAND WERE AT THE BANDSTAND

The Aristos band who are also known as “Life Of The Party” were the official band at the wedding reception. There was equally no single dull moment with them around as well. They did justice to everything, dishing out selected songs to the listening ears of guests, and made guests beg for more.

The party might not be a very big and highly populated party, it was indeed an exclusive for selected invited people and everything was on point.

WHITE & GOLD WAS THE OFFICIAL COLOUR OF THE DAY

Though the couple decided not to pick a particular aso-ebi for the wedding ceremony, but there was a gold gele for invited guests which they were expected to use on a white outfit. Many guests looked beautiful in the white and gold colour.

THE VENUE WAS  BEAUTIFULLY DECORATED

Trust me, anything planned and organised by Strictly Eventsng can never go short of expectations. They are definitely one of the best in the business. The venue was gorgeously decorated in white and gold with a touch of lemon.

The entire wedding ceremony was planned by Taiwo Bankole of Strictly Eventng. The bride’s makeup was beautifully done by Beauty Wise Makeover. Her outfits were all designed by Kayo Africa while Tobbies Touch took charge of her different hair styles to suit every occasion.

OVER 30 A-LIST STARS STORMED THE WEDDING

Other celebrities who stormed the wedding are Seyi Law, Mr. Macaroni, Seun Oloketuyi, Zanzeebee amongst others.