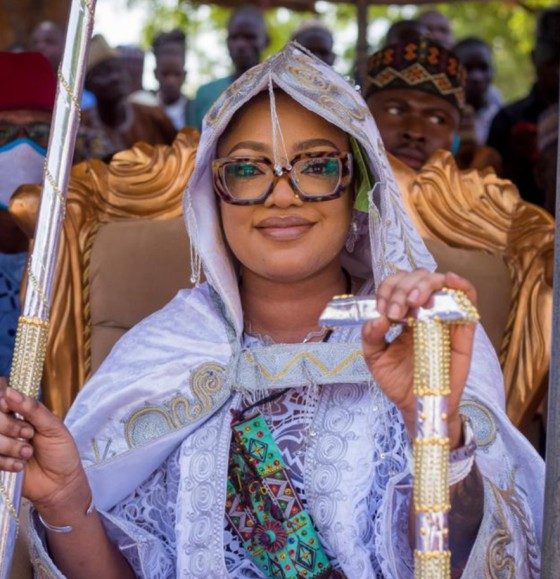 In her acceptance speech, the very delighted actress especially thank the people of Uke for deeming it fit to give such a huge responsibility and honour to her.

According to her “I am super proud that as a Yoruba girl, I am here holding a staff of office in the Uke Kingdom as this is an indication that preaches one Nigeria and togetherness. As the Queen Mother, the palace would now begin to see the impact of women in decision making amongst others.

Explaining further, the Emir HRM Abdullah Hassan disclosed that his father’s twin sister was the first Queen Mother as far back as 1970 and ever since no individual has emerged one until today’s conferment of the title on you.

In his congratulating message to the actress, the Emir said once again congratulation as the youngest among the Saraunias in the Northern Emirates.

It is also pertinent to note that the title conferment is the second in the history of the kingdom.

Sotayo Sobola has indeed become a force to reckon with in the movie industry with a  successful career and also running a different business. Just this year, she opened a new branch of Clean Stitches Store in Abuja and according to her, she sees Abuja as her second home and because she has a lot of clients, she decided to open a store in the Federal Capital City, and she will be shuttling between Abuja and Lagos as well as other parts of the world.

After the coronation that took place in Nasarawa State, the delectable actress decided to host her close friends to an exclusive party and coronation celebration on the 28th of December, 2021 at the prestigious while store event centre in Lagos.

The venue was beautifully decorated in white and gold. Many know Sotayo Sobola is very classy and sophisticated and her party should depict her personality. Guests were treated to soft music by the Marvellous band to usher them to their various seats.

The beautiful celebrant who had two grand entries into the hall of the party changed into two different gorgeous dresses, designed by the wave-making celebrity designer Becca, the CEO of Beccaneddle and Stitches.

The atmosphere was so cool, that guests were so comfortable and no one was in a hurry to go home.

There was also so much to eat and drink, as both local and intercontinental dishes were made available to guests, with other side attractions such as Finger Foods exotic drinks and cocktails.

The celebrant Sotayo Sobola stormed the event of her party looking very pretty in all while flowing gown that really gave her the royal look with her staff of office in her hands. She danced into the hall to some nicely selected tunes by the live band. Many couldn’t take their eyes off her gorgeous look.

A few minutes after she settled down, she gave her speech. According to her, she only wanted to host 100 guests for her 2-in-1 party. So whoever made it to the exclusive party should know, they mean a lot to her, and should not hesitate to express how really they feel about her.

All the guests in one way or the other are people she has maintained relationships with within years and appreciate them a big deal.

Femi Adebayo as Sotayo’s Bestie. This duo maintains a very cordial relationship and they have been there for each other through thick and thin. Femi Adebayo was among the stars that accompany Sotayo to Nasarawa to be coronated and during the birthday party, he explained why he shares a special bond with Sotayo. According to him, they have lots of things in common, both star mates, and also that Sotayo is a sucker for the loyalty which applies to him too. Also, he said he fell in love with Sotayo’s personality 20 years ago and they have been so close. Also, Sotayo’s kind-hearted nature is another attribute that attracted him to her. She is the only actress so far, who feels people behind the scene should also be celebrated and appreciated.

She even flew them to Dubai to have a nice time, an all-expense paid trip to Dubai.

Veteran actor, Anta Laniyan also spoke about his relationship with Sotayo. Anta is one of the highly celebrated veterans in the industry. He also shares a special bond with Sotayo, “The Father To Daughter Relationship”. He was among the few people that spoke about Sotayo at the party. He also described her as a very kind-hearted personality, who can’t afford to see anyone in trouble.

He is always more than willing to give a helping hand.

The Marvellous Band took charge of the event.

The Marvellous Band took charge of the event, they know the assignment and delivered it perfectly. There was no single dull moment with the live band around.

They kept dishing out nice tunes to the guests, who danced their hearts out.

They both described her as a very nice and kind-hearted lady who always reach out to people though keeps a very small circle and above all, a no-nonsense personality, they admire a lot.

The celebrant had a second grand entry.

The celebrant Sotayo had a second entry at her exclusive party.

She changed into a gold well-designed dress by Beccaneddle and Stitches.

MC Oluomo also honoured Sotayo, highly respected NURTW boss, MC Oluomo in the company of his second in command, Koko Zaria and his other boys, stormed the event. Immediately he stepped into the hall, a lot of celebrities around stood up to pay homage to him.

Popular Lagos socialite and hotelier, Shina Okanlomo also made it to the 2-in-1 event. He is a businessman that maintains a very cordial relationship with a good number of movie stars in the industry. He always graces their events to show supports and love he has for them.

With love from Nollywood.

Sotayo is one actress that doesn’t keep friends, especially in the industry. She minds her business a lot. Despite that, a good number still honoured her such as Eniola Badmu, Bimbo Thomas, Oyita, Kudi Alagbo, Femi Adebayo and others.

Bobrisky stood the show. Popular crossdresser, Bobrisky who stormed the party at the late hour of the day got everyone’s attention, not just with his gorgeous outfit but also he went on a spraying spree as if money was going out of fashion.