Home Entertainment I STARTED PLAYING MUSIC AS A ONE MAN BAND 25 YRS AGO, LAGOS Musician, SUNDAY AKA
Entertainment 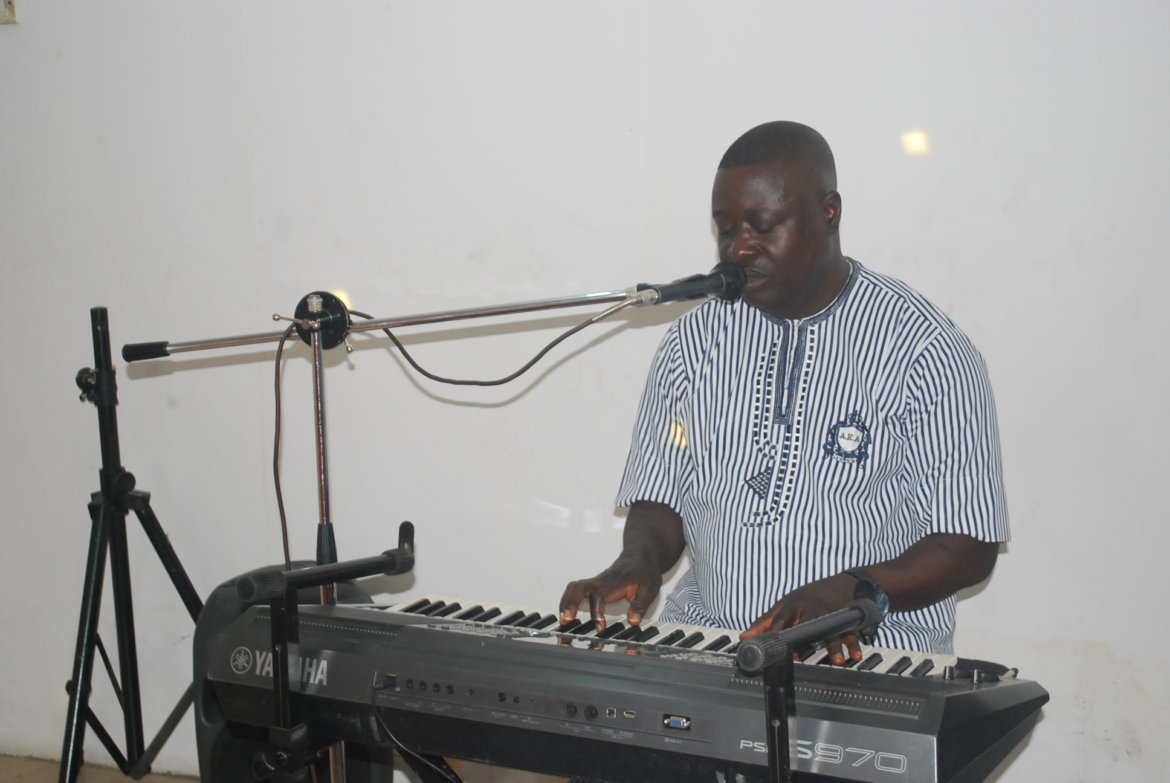 The Nigerian social scene is kept alive by music from prominent band players in the industry; this has led to the increase in demand for music bands at functions as there is hardly a weekend that goes by without a lot of parties or event holding. Even at wedding or burial receptions, Nigerians always anticipate good music from the music band. These bands comprise of a number of boys and girls, men, and women coming together to perform as they are led by a musician who is usually the founder or band leader.
Lagos musician, Sunday Adebiyi Aka is the founder of Aka Royal Melody Band. He usually plays at top events all around Nigeria, but something stands him out among his contemporaries. Sunday Aka can play, both as a full band and as a one-man-band. The story of how he started playing as a One-Man-Band is very intriguing and he shared it with City People’s Showbiz Reporter, DANIJI EMMANUEL on Friday, 4th August 2017, when this popular One-Man-Band player entertained at a City People event in Lagos. He was the official musician at City Peoples Hosting of Chief Ifayemi Elebuibon @ 70. Below is his brief interview.

Who is Sunday Adebiyi Aka?
My name is Aka Sunday Adebiyi. I am the band leader of Aka Royal Melody Band. I am from Kabba in Kogi State. I had my Primary and Secondary School Education in Kabba, Kogi State before attending the University of Lagos where I had my 1st Degree and Master’s Degree in Political Science. I have always been attached to music.

How did music start for you?
I started music as a kid; I was about 7 or 8 years old. I was in the choir then Cathedral of Saint Andrews Anglican Church, Kabba, it wasn’t a Cathedral then. I started there by playing the Keyboard. Since I had a flair for it, they sent me on a course to study more on playing instruments. Then Kabba was in Kwara State before Kogi State was created from it. I used to attend short courses then just to learn music. When I got admitted to Unilag, I continued playing in Lagos too. I also handled the Choir in some churches here in Lagos as Choir Master or Assistant Organist. Ebenezer Obey’s African Church in Okunola, Saint Peters Anglican Church in Idimu and lastly Bishop Ajayi Crowther Church in Gowon Estate.

How did you get into playing as a band?
Music as a band started for me professionally while I was in Unilag. I went for a party with my friend in my year 2, this was in 1991 or 1992, I saw these guys playing the keyboard and singing and it was so melodious and I said to myself, I do this thing in church and I can do better and they called me on stage to give it a try and I played and sang and it was fun and that was the beginning of it for me. We got close, and I can authoritatively say that most of us are band leaders today.

Would you say you influenced their success today?
They had a band then but there were also so many shows to play at in a single day, so we divided ourselves into factions of 3 and then share the shows.

So how did you end up as a One Man Band player?
It so happened that one day, we were supposed to perform at a show that came through me. Over 90% of the shows we got back then came through me because I was so entrenched in the Church and most of the members always recommend me for events. So this particular event came from a Church Member who wanted me to play at his event and we agreed. On the day of the event, those who were supposed to perform with me didn’t show up because they felt they wouldn’t make money from the event. So I played alone at the event and made so much money that day. It was that day that a woman who was passing on the road who I didn’t know complimented me and invited me, got my card and that was how it all started.

What was their reaction when they found out you played alone and it was splendid?
Oh well, they later attended the event and saw me playing. They came in while I was been sprayed money and I told them they couldn’t play with me. They actually opened up that the event they went to play at had nothing to offer, that they only ate. I told them they could eat here too but they weren’t joining me on stage to play.

So you play only as a One Man Band?
No, it depends on what the client wants for his or her party. I have a full band and we could play as that or I just play alone.

What informs the “Royal” in your Band Name?
My father was a King and so was my grandfather. They are both late now. My father was the late Oba Daniel Obatimehin Aka, he was the Obaro of Kabba. He reigned for about 30 years. My father was 81 when he died.

I STARTED PLAYING MUSIC AS A ONE MAN BAND 25 YRS AGO, LAGOS Musician, SUNDAY AKA was last modified: August 22nd, 2017 by Reporter

‘My Mother Gave Birth To Me Whilst...