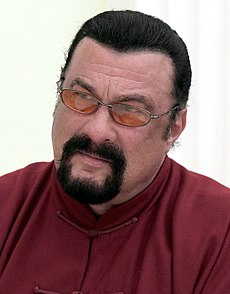 Wark asked the Under Siege star: “You’ve been very much caught up in all the allegations of sexual harassment, you had a rape allegation against you and I wonder how you deal with all that?”

Without saying a word, Seagal promptly removed his earpiece and walked off the set.

Wrapping up the interview, Wark told viewers: “Steven Seagal, there, and of course, though he didn’t respond there, he has said previously he denies any allegations that have been made against him.”

The actor was on the show to discuss his relationship with Russian President Vladimir Putin, and was given the title “Special Representative for Russia-US Cultural Links”.

The activist was accused in January 2018 by actor Rachel Grant of sexual assault. Grant alleges that during a rehearsal in a hotel suite for 2003 film Out for a Kill, Seagal forcibly exposed her breasts before pushing her onto a bed.

Amid a wave of #MeToo allegations against Hollywood actors this year, another was made against Seagal in March. Regina Simons claimed that in 1993, when she was 18, Seagal raped her at his home after inviting her over for what she believed to be a wrap party.

Seagal denies all allegations made against him.

Steven Seagal walks out of BBC Newsnight interview when Me Too allegations are raised was last modified: October 5th, 2018 by Igbokwe John