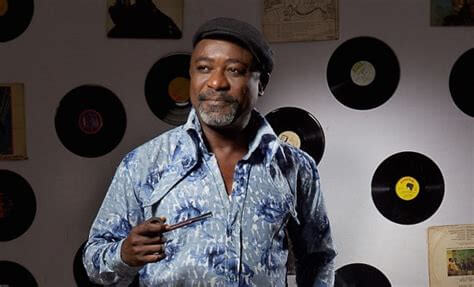 Many don’t know Bimbo Manuel started off from been an accidental DJ before he moved on to radio and television. He once interpreted some unforgettable roles in Checkmate and Ripples (two popular television series) that held viewers glued to their television. He is also part of the modern day movie industry where he has won many awards and received nominations for many. He is also an industry activist.

Bimbo Manuel hails from Lagos. After graduating from the University of Port Harcourt with a degree in Theater Arts, he began his television career in 1985 as a broadcaster at Ogun State Broadcasting Corporation (OGBC). He later moved to Ogun State Television (OGTV) before commencing his acting career in 1986.

A few days back, this ace actor, director and broadcaster who has continued to remain relevant in the entertainment industry celebrated his 60th birthday, even though he doesn’t look 60 considering his agility and his youthful look. He himself made that remark.

In an interview with City People Publisher SEYE KEHINDE and Assistant Editor SUNDAY ADIGUN, this amiable Director speaks on his life @60, and how he is set to release his first play titled ” Interview With A Prostitute”.

How has it been, hitting 60?
To be honest with you, sometimes I still wake up in the morning trying to make sure that I counted my age correctly, because I really can’t tell the difference. I guess one has lived life and it’s the experience of different incidence of life that has taught me whatever I can claim to know now rather than age.

You still look so handsome and agile. What is the secret?

I guess in my head I still can’t tell the difference to me now, and me 20-30 years ago. I think it’s a constant renewal of the mind that informs everything else. It informs how you dress, it informs how you push your body to remain useful, I’m not into all those fact of eat this, don’t eat that, because I’m very poor at maintaining the discipline those things requires. I guess it’s just something that is me and its more in the head to remain youthful.

So in my head I am not old. If I look young, agile and all that it’s a function of how I think.

How did the journey to your career start?
I have been in the entertainment industry for about 40 years, I started out has an accidental disk jockey (DJ), we were in a place there was no fun, we were just sitting down drinking beer and all that, and you know as young people we needed to express ourselves.

It was in Ijebu Igbo that year, I was working with motor licensing office in Ogun State, so there was this small hotel next door to my office, I think it was owned at that time by Late Haruna Ishola, this bar in this hotel is always laying fallow every weekend, people just drink up to a point and everybody go back home, and there were so many young people in the town that time, some of our friends will come from different towns we would just sit down and groove and it grew to a big party weekly. So I had a responsibility to play music, that was how it all started, though them I was a lot younger.

I was in secondary, Ibadan Grammar School, and people who were reigning as at that time, the likes Alex Condi, Alamu Special Georgio Bartel, Tunji Macquins, people like that, and you just have to dream as a young person to be like these guys on radio, that were incredible and I got the opportunity to meet Alex Condi in person many times because he was my brother’s friend and I just said to myself “This is what I will grow up and do” that I just have to be a DJ. It was like living my dream when I got the chance to play music to a crowd, it was incredible, I grew up from there.

I became a semi professional DJ, and I got an invitation to OGBC the AM station that time, that was late 79, 80 and I started working same day as an under study before I went on Air on my own, so it was so inspiring at that time. Later I went to do many other thigns, and I went from there to school in University of Port Harcourt. I went from OGBC to OCTv, that was a starting point as well. I also like directing, I find it extremely fascinating, and I said I want to be a director, then I went to school for directing as a major course, and I was confused when it was said that we were learning state not television. I was confused for the first few moment that I was in that school, then I started to find it fascinating as television itself.

In all of this, what has been your staying power?
It is the grace of God, because I have looked at everything else, what I’ve done and what others have done for me but that has accumulatively helped me up to this point, then I recognize that if I do not want to take human being for granted, they always have the option of not doing whatever they do to further my career, they have the option, and that cannot be because I’m Bimbo Manuel something just came alive there, in my favour, so I want to acknowledge it as well, it’s God’s grace. And we must also acknowledge that we cannot continue to be in sin and expect the Grace of abundance.

We are not talking about sin now, but we are talking about me just assuming that I just chill, God will do it again anyway, No, it doesn’t happen like that, work without prayer, prayer without work I think that just balance it. So I work as well, I constantly try to improve myself, I choose my friends across social strata, I chose them across religious believes, it doesn’t matter to me, because for each one of them and each experience, each relationship forms a greater bank for me as a creative person, weather I’m working as an actor, or I’m working as a writer, or working as a director or I’m working as a voice over artist or content creator or all of those things.

It’s a massive bank for me because nothing I read compares with what I hear or see, so that is one of my strength, I’m not the type that think because I’m 60 now there should be something that I cannot do, or some people that I can’t talk to now, no, my life is not like that, nothing would change about me, I am Bimbo Manuel, as I said it’s in my head.

What has life taught you at 60?
I think the lesson I’m taking out of this season is to learn Peace, I always thought I was an easy going person, but I’m even learning to learn peace, it’s extremely vital, and I think it informs everything, I’m beginning to see that we are in turmoil inside because we are permitting things that our eyes sees, the thing that our ears hear, the way we see other people and allow them to form the race that we run, we cannot have peace inside, we can not be calm because we are permitting other people to inform how we live, we are chasing the patterns that God has set for us, if we have peace, inner peace, another world for it is “Contend” we would discover that it would not matter whether you arrive on a red carpet with Bugatti or you come in a Keke Marwa, the big goals that people set for us and we chase it because inside we too we lack peace, so our own real objectives will suffer ultimately.

Any regret so far?
Who does not have regrets but you see as I sit here there is no regret that disturb my life in such a way that you ask me and I remember it. I don’t have such regret, but who does not have, my be if I sit here long enough I will remember one.
I would have like to be a University researcher actually (laugh) because that was one of my dreams growing up.
First I wanted to be a soldier, I got very close but it didn’t happen, I wanted to be a DJ, I chased it took another route, I wanted to be a Scientist, because by the time I was 24years I had finished reading the “Encyclopedia Britannica” by the time I was like 26. I have finished reading “the Americana and few edition of the medical encyclopedia in my father’s library, I don’t get opportunity to read now as I used to, but every chance I get, I read, I’m reading “Lagos” City of Imagination” at present.