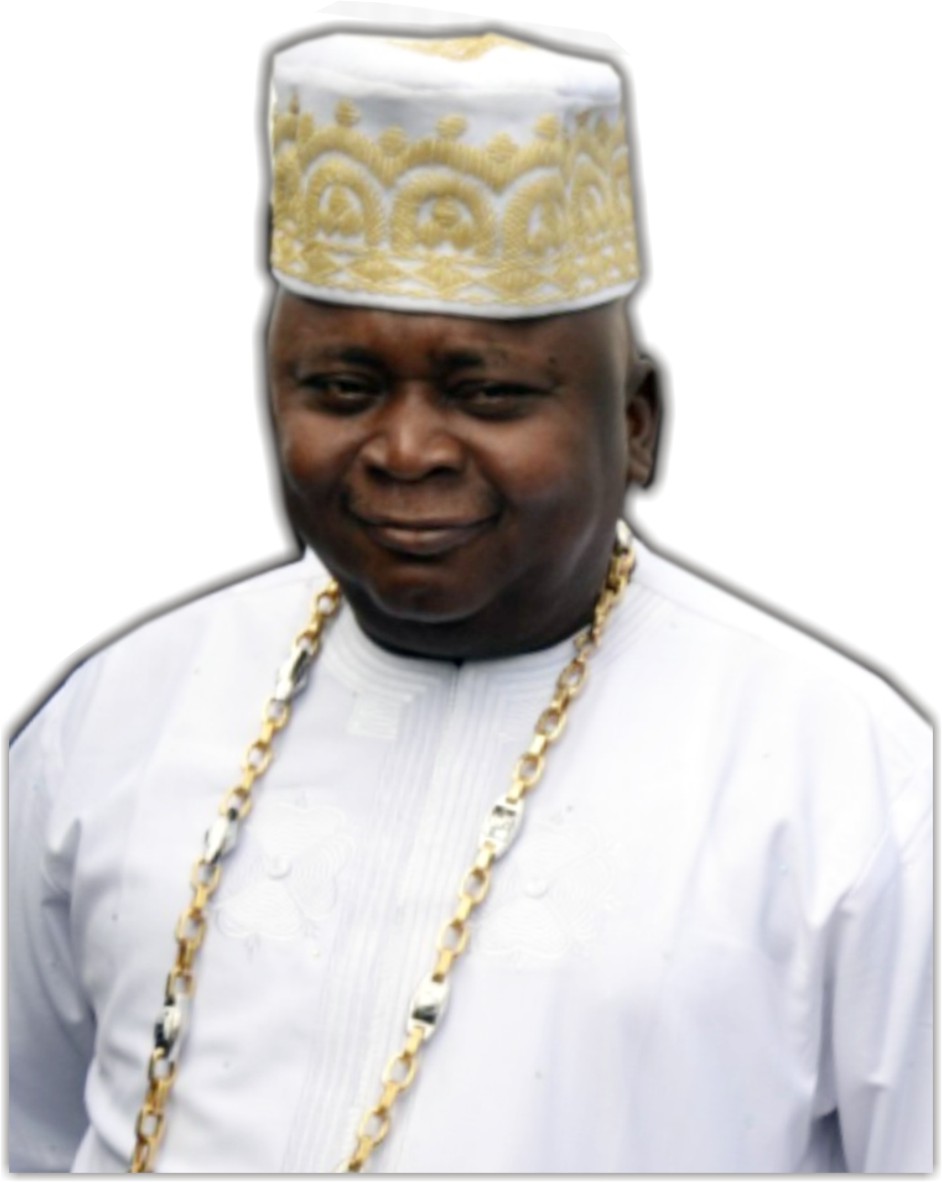 The entire Abeokuta stood still in honour of Hon Oladipupo OlatundeAdebutu and his wife, Adenike Omolara Adebutu as they became the toast of all after bagging two chieftaincy titles in one day. Everyone had thought that would be all about it on Saturday the day they were both crowned as the Mayegun and Erelu Mayegun of Ijeun; but that was just a tip of the iceberg on this eventful day.

Men of timber and caliber traveled far and wide from across the entire Yorubaland to felicitate with the new chief. Abeokuta became a mini tourist centre but the ancient Olumorock was not where they visited, it was the palace of the Alake of Egbaland. HRM Oba Michael Adedotun, Aremu Gbadebo, is the paramount ruler and Alake ofEgbalandand he was marking his 15th coronation anniversary. The more reason people trooped in, in their numbers.

The event was thrilling, full of fun, entertainment and there were much food and drinks for everyone in attendance. City People’s DAMILARE SALAMI 08155134152 was there and he brings you the full and behind the scene gist of all that went down at the event, enjoy.

IJEUN TOWNHALL WAS THE FIRST POINT OF CALL

It was a ceremonious gathering indeed and security was top notch as different chiefs of Ijeun began to find their way into the community town hall where the coronation and conferment of the new Mayegun and Erelu Mayegun of Ijeun took place. Chief Ladi and Erelu Adenike looked all ravishing. It was indeed a worthy celebration as cultural dancers displayed to the satisfaction and entertainment of the enthusiastic audience.

…AND THE CROWD MOVED TO ALAKE’S PALACE

Shortly after bagging the Mayegun of Ijeun title, the next point of call was the palace of the Alake of Egbaland where the second conferment took place. It was another level of cultural display there. From the palace entrance, traditional dancers were well lined up in their numbers and traditional outfits to welcome Chief Ladi Adebutu’s entourage. He was well balanced in a Black Range Rover SUV with his wife while men of the Nigerian police and NSCDC took care of the security details.

Did we tell you that more than twenty royal fathers graced the occasion? Yes, they did. But the talking point was the royal entry of HIM, Oba Adeyeye Enitan Ogunwusi, Ojaja II, the Ooni of Ife whose entrance displayed pure African cultural heritage. He was in the company of his entourage who sang his praise at every given opportunity. His trumpeter was never off duty on the said afternoon as he amplifies every opportunity to loud the presence of his principal.

The new chief and his wife had been in the palace for a while but their entry into the palace hall had to be different because it was their day indeed. Gorgeously dressed in white Agbada and a well-fitted cap, Chief Ladi Adebutu and Erelu Adenike Adebutu majestically walked in amidst drums and dances. The traditional dancers who welcomed them to the palace were a good company as they did justice to the different beats oozing out of the traditional drums.

APALA MUSIC IN A BIT

Abeokuta is the home of Apala music in Nigeria. On first listen, Apala music could seem deceptively simple since it focuses almost exclusively on vocals and percussion. However, a deeper listen reveals the complicated vocal interplay between a group’s leader and the rest of the group, while the complex rhythms are provided by a variety of percussion instruments from southwest Nigeria. It was an enjoyable experience having a feel of pure African music without a blend of any foreign instrument. The palace entertainers gave all the royal fathers in attendance and guests seated a feel of pure African entertainment. Only the palace of the Alake of Egbaland could boast of such feat. And all to the praise of the new chiefs.

THIS IS NOT A SECRET CULT TITLE…

Chief Akinremi, the Ogboye Egba, and chairman of the chieftaincy ceremony committee revealed that the Lisa AjeEgba and Erelu Lisa Aje Egba are not occultic titles where people take an oath of secrecy and pledge secret allegiance to the society. Instead, it is a call to duty, a call to serve the people of Egbaland. It is a title focused on improving the general economy of Egbaland. Creating wealth through empowerment and job creation was the reason for the title and only worthy and noble individuals like Chief Ladi and Adenike Adebutuwho have been tested and trusted get such titles from the Alake of Egbaland.

It was an emotional moment for Chief Ladi and Adenike Adebutu as they received sincere and heartfelt prayers from the ‘Arole Oduduwa’ himself, the Ooni of Ife, who showered blessings on the couple as they received another feather to their cap. Ooni who expressed satisfaction at the way Chief Ladi had already affected Ogun State positively especially in the area of job creation further prayed that the new Lisa Aje Egba will never lack ‘Aje’ fortune and prosperity. In his conclusion, the Ooni revealed that the Adebutu dynasty is not just blessed with rich and hardworking individuals, it equally has people who think about their community first before considering themselves. He also hailed Chief Kesington Adebutu, the Odole of the source.

Ladi is a proper son of the soil. He is a straight forward individual with many leadership qualities. Any other name would not have come to mind when we were thinking about who truly deserved to be the Lisa Aje Egba. These were the words of the Alake and paramount ruler of Egbaland, HRM, Oba Michael Adedotun, Aremu Gbadebo before declaring this charming couple, new chiefs of Egbaland. Oba Gbadebo further revealed that it was a title Chief Ladi had earned even before it was conceived because his activities in the farming and real estate businesses had already put him to the fore. He is a wealth creator who has many families depending on him for their daily living. Such a man truly deserves to be honoured, the Oba concluded.

There are very few events that have double receptions holding concurrently. This and many other reasons made the event super classy. The first reception held just beside the Alake’s palace and many of the guests were fully entertained there and well catered to. There was music, surplus food and drinks, maximum security and everything that makes an owambe enjoyable was provided for the guests in this category.

Do I need to tell you about the Park Inn Hotel by Radisson located at Kuto, Abeokuta, Ogun State? It is a 4-star hotel with top-notch facilities. It was the venue of the reception of very very important guests of Chief Ladi Adebutu who came to grace his coronation as the new Lisa Aje Egba. The hotel suddenly couldn’t occupy more people as the crème-de-la-crème of the Nigerian social scene graced the event. From royal fathers to businessmen, politicians, economists, entrepreneurs, educationists, the list is endless. They all stood up for Chief Ladi Adebutu on his special day. And judging from the smile they wore; you would know that they had value for their time because everyone was well entertained.

ALMIGHTY KWAM 1 ON THE BANDSTAND

Everyone knows that any event that has the Mayegun of Yorubaland and Fuji King, Wasiu Ayinde Marshal on the bandstand is not a child’s play. Yes, KWAM 1 thrilled for several hours without getting tired and showed no sign of fatigue settling in. He played till dawn and guests didn’t even know that it was pretty late into the night. That was how KWAM 1 held his audience spellbound at the event. There were many side attractions on the stage. Many top celebrities danced with the celebrant and his wife.

The three popular princesses and sisters of the Ooni of Ife were also in attendance and they stole the show. Princess Adebimpe, Princess Folasade and Princess Adesola were stylishly dressed and caught the attention of KWAM 1 on stage as they slayed in their beautiful attires.

Chief Ladi Adebutu’s political associates also came. They had a special table not too far from the stage which also had the new chief’s space. As the event was unfolding, they held a special toast for their man. Some of them also said that Chief Ladi is destined to be the next Governor of Ogun State and that all hands are on deck to make this a reality in the next election.

Help! My Married Lover Wants Me To Do Abortion No 3