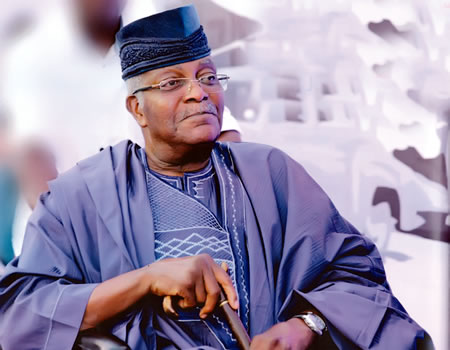 History was rekindled in Lagos on Thursday, November 28, 2019, as friends, family, and academic giants came together at the prestigious Adeyemi-Bero Auditorium, Alausa Ikeja to celebrate the life and times of late Mobolaji Johnson, who passed on, on Wednesday, October 30, 2019 at the ripe age of 83.

His death necessitated his friends in the academic field to organize a colloquium in his honor, where snippets of his life and time were mirrored by highly informed historians and academicians who are sufficiently furnished with documents, accounts and thematic of the unpopular symbol of accountability, transparency and good governance.

Renown Professor, SIyan Oyeweso, who gave the opening remarks stated that People can learn from Mobolaji Johnson today because he stood up for the people and enacted laws and policies that made life easy for the Lagosians of the 1960s and 1970s.

There were plenary sessions where renown speakers looked at Mobolaji Johnson’s achievement from various directions in quest for good governance, federalism, and democracy. A short the documentary was played for guests to grasp the achievements of the former governor in Lagos State and why he should be remembered for his good works in Lagos

Johnson was first appointed by Aguiyi-Ironsi as the administrator of the former federal territory of Lagos in 1966. Ironsi was the head of state and wanted someone from Lagos to handle some of the problems of the federal territory. In May 1967, Lagos State was created and Johnson became the first governor of Lagos; the state was now composed of the old Federal Territory of Victoria Island, Ikoyi and Lagos Island plus the additions of the Epe, Badagry, Ikorodu and Ikeja divisions. He was involved in developing the civil service in Lagos State. Johnson was initially assisted in running the state with help from some key civil servants such as Administrative Secretary, Adeyemi-Bero, Finance Secretary, Folarin Coker, and the acting secretary to the Military Government, Howson Wright and waited until April 1968 before appointing his commissioners.

Unknown to many, Mobolaji Johnson recorded landmark achievements in his 8 years’ serve as Lagos State Military Administrator, some of the achievement have been distorted by carries of pseudo-historic theories and the achievements are being credited to some order latter government

He did other networks of roads and bridges that constitute what is modern-day Lagos and the reclamation of the Bar Beach shoreline.

You won’t find anything in the history books about it because it was too tremendous, too magnificent and too momentous to be compressed within the malnourished pages of today’s book.

The good news is City People shall be doing a series on this great man and his various unpopular achievement to rekindle his relevance in the historic book of Lagos.

How Gov. ABIODUN Got Many OGUN APC...