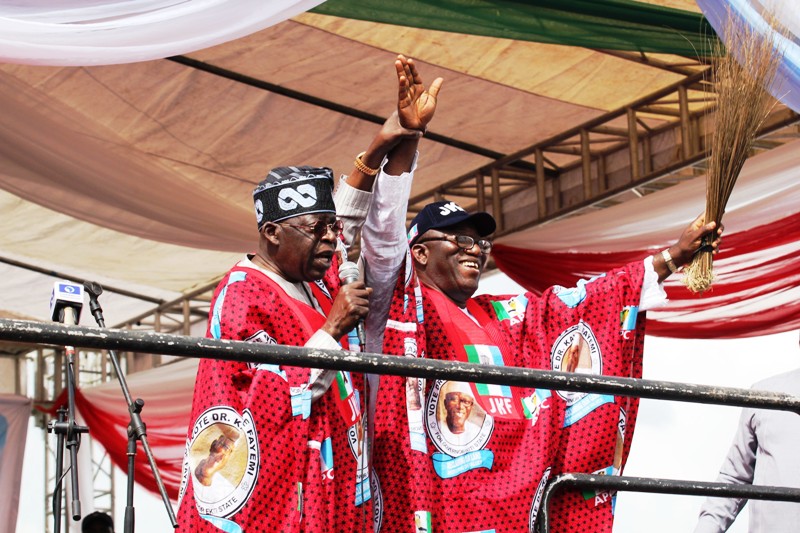 •As Each Declares Interest In APC Presidential Ticket

The surge in the number of southwest politicians that have purchased nomination forms to contest for presidential tickets has been described as “a strategy to ensure power rotates back to the region.”

Against the impression that southern politicians may lose out eventually despite paying so much in the race, there are plans to reduce the number to two or three before primaries.

As of last Friday, the ruling All Progressives Congress (APC) has raked in the sum of N1.23 billion from the sale of Expression of Interest and Nomination forms to 17 Presidential aspirants.

The presidential aspirants that have picked their forms include, the Minister of State for Education, Emeka Nwajiuba, Jigawa State Governor, Abubakar Badaru, Ebonyi State Governor, Dave Umahi; his Kogi State counterpart, Yahaya Bello; the National Leader of the party, Senator Bola Tinubu; Senator Rochas Okorocha. A female presidential aspirant, Uju Kennedy, has also picked her forms after paying the sum of N30m as directed by the party, among others.

Beyond the race for the number one spot, the rate at which some key politicians are buying nomination forms and indicating interest indicates there’s a power struggle at play.

There have been insinuations that the cabal initially wanted to disrupt the southern aspirants by encouraging many of the party members from the region to come out and declare their interest in the presidency. Some analysts believe that the northern cabal wanted as many southerners as possible to come out while they will eventually sponsor a few aspirants from the north. The disintegration of the south therefore will give room for the north to emerge.

New revelations now being revealed showed that the huge turnout of interested members is a means to get a space at the table, when the men are eventually called to sit down for negotiation.

A key member of the APC who spoke anonymously to City People advised that Nigerians should not assume that the surge in the interest for the presidency will necessarily work against the southwest.

“Don’t assume because the likes of Senator Amosun, Gov Fayemi and the likes are throwing their hats into the ring means we are disunited. “In fact, the opposite is the case. We are aware of how the cabal has been pushing some forces to come out even without the core intention to run.

“We are also playing the game the best way we know. When we all gather at the negotiation table days before the primary, we shall also have the numerical and material strength to match the negotiation. “I promise you that we will not be caught off guard.” The strength of any political fusion lies in its available resource that can be relevant on the table”, our source said.

Another key member of the national assembly admitted that the northern cabal who are rooting for southern candidates are only doing so at the face value, but are actually planning to create discord among the southern leaders.

“How can a northern governor, with his entourage of northern loyalists storm the residence of a former president and try to convince him to return to power, and at the same time, this northern governor has come out to contest for the same office. Does it make any sense?”

So the idea is to get as many people as possible to keep buying the forms. When we get to that river, we’ll see who will be strong and united enough to cross,” he said. In the same vein, a South West APC Elders meeting with presidential, gubernatorial and National Assembly aspirants from the zone was held last Friday on a friendly note, as sources confirmed that the leaders resolved that every aspirant has a right to contest.

The meeting had been convened by the first Chairman of All Progressives Congress (APC), Chief Bisi Akande and a former Governor of Ogun State, Chief Segun Osoba, both of whom served as Co-Conveners.

Present at the meeting were all the presidential aspirants who have come out so far to declare their interest. They are the Vice President, Prof. Yemi Osinbajo, former Lagos State Governor, Bola Ahmed Tinubu, Senator Ibikunle Amosun and the Ekiti State Governor, Kayode Fayemi.

The ongoing rush for the presidential tickets, in the end, will be a game of aces in the hands of the negotiating forces between the northern cabal and the southern forces.

The Game Plan Of AMOSUN, FAYEMI & Co Revealed was last modified: May 10th, 2022 by City People

How Tolulope Ajidagba Introduced Folarin Arowolo to her family In Lagos.