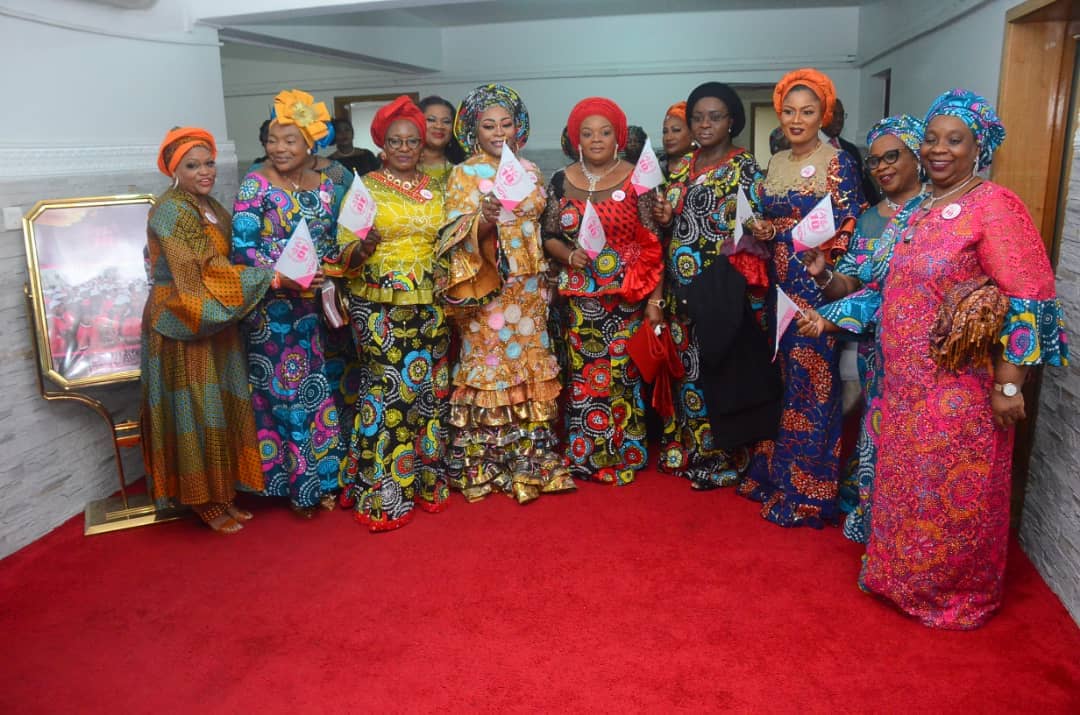 Beautiful.  Elegant.  And amazing are 3 apt words to best describe Titi Adenuga,  the lovely wife of Mike Adenuga, the Globacom boss. She will  forever remains a style icon of our time. The beautiful woman added another feather to her cap penultimate Monday, 29th October when she turned 52. At 52, life surely begins for this lovely mother of 2. When you meet her, you will be humbled by her softness and great humility with which she relates with you, very accommodating and generous to a fault like her husband.

She is living her life to the fullest being the wife of the second richest man in Nigeria. Titi Adenuga’s style has always set the pace for many young women and she is always a party delight any day any time. She wears expensive and luxury pieces from the best designers around the world and one of her most priceless possessions are her jewelries which are high end precious stones.

This beautiful woman stepped out 2 days before her birthday in Lagos on Saturday 2nd,  October at the arise women conference put together by her darling friend of many years, Pastor Siji Iluyomade and she looked graceful in a lovely mix coral colour Ankara fabric and paired it with a diamond coral jewelry. She let her lovely hair down and never looked close to 52.

She was well recognized and introduced by her friend, Siju who revealed that they have been together since their Queens College days. Despite that she lives a more quiet and conservative life, she hardly go for parties and only attend the most important ones, her fashion and style has not reduced and that is why many still want to have a glimpse of her anytime she is at an event. When her husband celebrated his 65th birthday some months back, she was also at the helms of affairs with all their children gathered round them,

Mrs Titi Joyce Adenuga also dazzled in a flowery green long dress with a diamond earring to go with. She is born to the Okome families from the East. She attended Queens College, Yaba and graduated at the Obafemi Awolowo University, Ife many years back. She is fondly called Tizzle Girl by her teaming friends and families. It was gathered that she met her billionaire hubby at the defunct Devcom Merchant Bank and like they say the rest is history.

Titi Adenuga’s  style can be traced back to her late mum who was very stylish in her time. This reporter covered her mum’s burial 4 years ago and it was revealed that her mum never joked with fashion. Her late mum, a teacher, Madam Susannah Mebulaghanje Okome, who died in the US at age 84 was giving a befitting burial 5 years after her husband, Pa Elijah Okome died. Her mum’s burial reception which took place at British International school, Lekki brought her out of her shell and she showed that style runs in their family.

She looked beautiful in her luxury and expensive pink lace which she later changed into the Ankara aso ebi. Her mum is also fondly called Sister Suzi and she was one of the founding distributors of Brozuela (jackel) a company that imports George and Heize head ties and later designed her own George Wrapper, the prestige which was used to launch and open The National Theatre and Festac 77.

She was a popular dancer during her younger years at Okere ‘Olori Ujo’ and a patron of many Itsekiri societies. A fashionable woman who was well known for her remarkable dress sense. A staunch Catholic, she worships at SS Mulumba and David in Surulere and an active member of the immaculate conception society and The Rosary crusade choir.

She was said to be a greatlover of sunshades and rings, she can’t step out without her favorite rings, and basically she is a lover of jewelries which all of her children took after. You need no soothsayer to tell you, Titi Adenuga was born into fashion, she knows it like the palm of her hands. She dictates fashion and never follows the rules. She also loves to dance and this are some of the many traits she took after from her mum. The world gathered together on her day to celebrate her on attaining another glorious feat of a new birthday.