The Intimate Story Of Born Photo In IBADAN 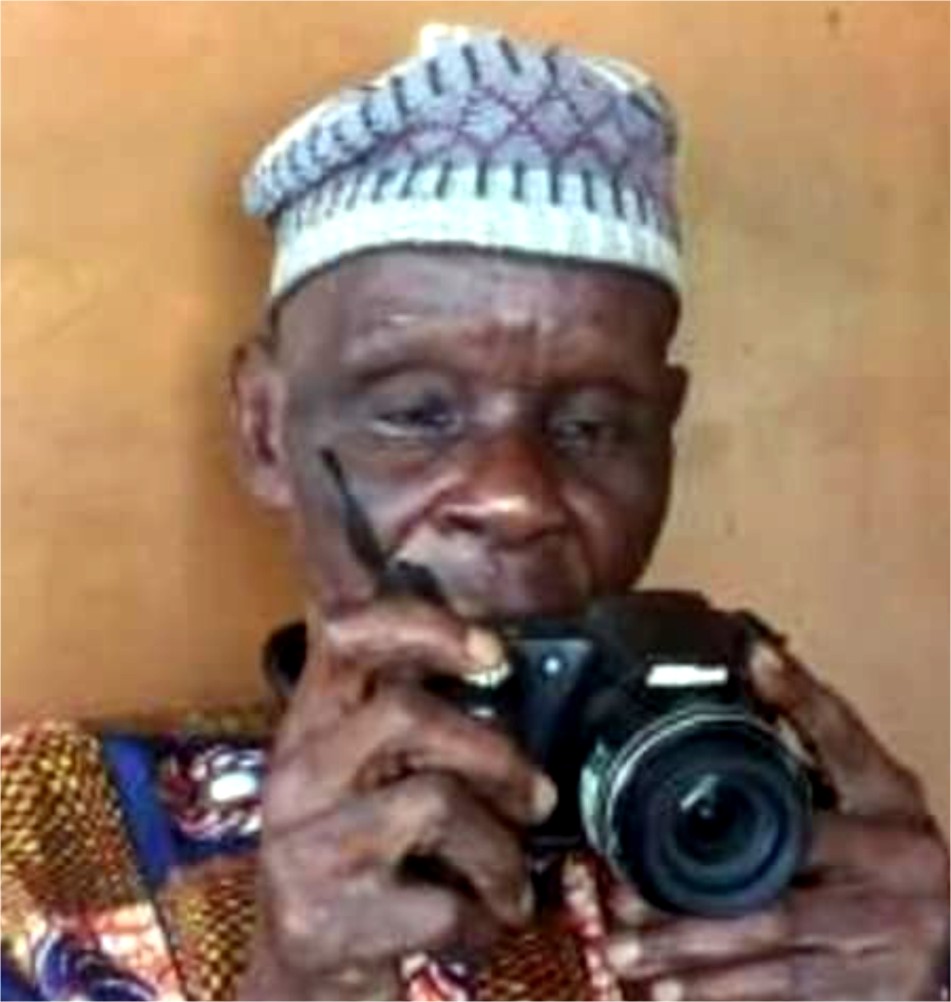 •Oloye LEKAN ALABI Writes About Him

where he was an organist. Pa. Ositelu, an indigene of Ogere-Remo, Ogun State, died peacefully on Friday, 24th December 2021, while taking a nap inside his famous studio at Isale-Osi, Ibadan, on the eve of his 86th birthday. He was born in Agege,

On Wednesday 8th May 2013, I hosted Pa Ositelu at a luncheon at Omo Ajorosun Club, Ibadan. I am a member of the club. Below is a copy of my post–luncheon tribute to Pa Ositelu which was published in my column in the City People Magazine issue of 29th May, 2013. Please, savour it.

“First, I wish to thank you all for accepting my invitation to this luncheon in honour of veteran photographer, Pa. David Owolabi Ositelu, a.k.a “Born Photo”, whose studio at our dear Isale – Osi SWI Area of our great city, Ibadan, has become synonymous with the studio location. Today, as before, any first-time visitor to our area from any part of the country, nay the world, needs to just mention “Born Photo”, and he/she would, without much fuss, be directed to Isale-Osi. As such, Pa. Ositelu, through his alter ego, “Born Photo”, has become not only an icon in his profession, photography, but a ready ‘Atlas’. Not many people know that Papa Ositelu hails from Ogere-Remo, Ogun State, though. Now in his late seventies, he established the photo studio in the 1960s.

Today’s ceremony will certainly evoke some nostalgia in we, the people of “Born Photo” area, as well as anyone connected in one way or the other to our area. For me it is a throwback to my childhood years. “Born Photo” was our family photographer in my boyhood years. The passport photographs for my secondary school admission forms in 1963 and Prelim form of the University of Ife (now Obafemi Awolowo University (OAU) in 1970 respectively, were taken at the studio.

When the Nigerian Tribune newspaper issue of Wednesday, 20 March, this year (page 20) featured “Born Photo”, I felt happy that the icon was honoured while still alive. But, on further thought, I concluded that a mini- ceremony, such as this, would be appropriate to celebrate our own “Born Photo” while still hale and hearty.

So, reaching out to 2 of my ‘aburos’ from our Isale Jebu-Oja ’Ba-Oritamerin-Born Photo-Oke-Foko axis of Ibadan, Ayodeji and Bolaji, who incidentally are the Caretaker Chairmen of Oluyole and Ibadan South West Local Governments of Ibadanland respectively, I told them of my decision to honour Pa Ositelu. They both agreed to join hands with me, and pleasantly surprised me by co-opting a colleague of theirs into this recognition of character, service, and excellence.

Distinguished ladies and gentlemen, please permit me to invoke the great memory of my beloved late paternal grandmother, Mama Asma’u Odunola Alabi, the first Iya Suna of Ekerin Ajengbe Mosque, Ibadan; late textile dealer at Lalupon, Ibadan; and the Woman Leader of the defunct NCNC under Adegoke Adelabu, alias ‘Penkelemesi’. She imparted to me, among other values, the need to offer and recognize good service for public good. I took the trait from her. Little wonder, therefore, that, I, as a 17-year old form three student of African

Church Grammar School, Apata-Ganga, Ibadan in 1967, wrote a solidarity letter to Professor (then Mr.) ’Wole Soyinka, while he was clamped, without trial, in Kaduna Prison for his efforts at preventing the Nigeria-Biafra Civil war. Upon his release from prison in 1969, Prof. Soyinka sent me a formal letter of acknowledgement and appreciation. When the American system unjustly withdrew Muhammad Ali’s world boxing crown and licence in 1970, I was a signatory to the universal call for the return of his well-deserved boxing rights through the “Restoration Campaign for Ali”

organized by the Ring Magazine of the United States of America. The US Supreme Court later overturned the seizure of Ali’s boxing title and licence and ordered their restoration. Ali, you will recall, was the first boxer in history to win the world heavyweight boxing title thrice. Till date, he remains the greatest boxer that has ever lived, even though he retired from boxing some three decades ago.

In April 1994, at the launch of one of my books, “For Public Good”, at Premier Hotel, Ibadan, I publicly announced my foundation – ROSES (Recognition of Selfless and Excellent Services). The first recipient of the ROSES award was the national flag designer, Mr. Taiwo Akinkunmi. Among past recipients of the award were: a former Government House, Ibadan cook, Effiong Snr., in fact, the longestserving cook whose delicacies were eaten by over 12 governors, military and civilian, and their families; the late high-life music icon, Eddy Okonta; the late Juju music maestro, Olalekan Olorode; and the late editor of the defunct Sunday Sketch, Mr. Phillip Bamidele Adedeji. Today, I am delighted that Pa David Ositelu has joined the league of recognized service providers for public good.

My speech will be incomplete and without flavor if I don’t mention some other icons of our area, who inspired, and continue to inspire, my humble self and my peers while growing up at our Ile Ekerin Ajengbe, SW1/131, Ibadan home. In doing this, I shall lift some paragraphs from my article titled, “I know Rashidi and Yemi” published in some national newspaper (for ease of reference, The Comet of October 5, 2004) as a tribute to mark the 60th birthdays of my dear

‘buroda’ at Isale-Osi, High Chief Rashidi Adewolu Ladoja, the Ekerin Olubadan of Ibadanland and a former governor of Oyo State and Dr. Yemi Farounbi, my former boss at NTA, Ibadan and at the old Oyo State Governor’s Office, Ibadan who is now Nigeria’s Ambassador to the Philippines.

“How much freedom can a writer get away with under the ambit of poetic licence?” you ask, if you notice a derring-do in the above headline (I know Rashidi and Yemi). But far from it, this writer is not on a derring-do although the reader will be right to ask, “How dare you address two 60-year old citizens by their first

names?” And to boot, one is a state governor, while the other is an accomplished administrator of communication outfits. Because I have stated that I am not on derring-do, and coupled with the fact that the Nigerian culture frowns at a junior looking his/her senior(s) directly in the eye, I respectfully implore His Excellency and Uncle Yemi to please tolerate my utilization of the poetic licence in coining the above headline. It is one of the fallouts of the incursion of foreign cultures into our hallowed one. Sebi?

Now to His Excellency, before whose very good eyes I was born at our Oja ‘Ba – Ode Ekerin-Isale Osi (Born Photo) axis of Ibadan, with whom I share the sunah, Abdul Rasheed and Yoruba cognomen, Akanmu and behind whom I tag in the traditional chieftaincy ladder of Ibadanland. He is one of the many role models/mentors I, and my cousins, Moshood, Yekeen, Harun, Bili, Agbaje, Oriolowo (now late), etc looked, and still look up to. Before Senator Ladoja though, had been the late Alhaji Alimi Adesokan, former Chairman of the defunct Ibadan District Council and Parliamentary Secretary to the last Premier of the former Western Nigeria, the late Chief Samuel Ladoke Akintola, GCON.

While the list is inexhaustible, this tribute will be dry if I do not recall the 1960s era of “Toronto” (bootless soccer) on Progressive Day (Aladorin) School field, table-tennis games at Fatai Oloja’s, wrestling on ‘coffee’ at Gege, the bicycle races at Atenda, and Baba Jebe’s in Oja’ba, amala and ewedu of Tidibole, Adejinmi, Lati at Isa Saku and Emele at Foko. What about Iponriku, our valued Ibadan leading masquerade; Raimi Sango; Paramole; Arigbabu; Tonjo the bird catcher; Oroyinyin the motorcycle mechanic; Owo-Iya the barber, ‘Patipatitanmbe’ Akulu (a corrupt form of Hercules); Sikira Elewa; Ajitoni Bar; Batadiran; Oke-Foko Boxing Club, etc. In our ‘Born Photo’ area also emerged stars like the late Abbass Olawoyin and Sir Bule,

Today, ladies and gentlemen, I crave your kind indulgence to repeat my earlier statement that we are here to celebrate character, service and excellence as typified by Pa Ositelu. I, therefore, use this platform to urge all those men and women of character, patriotism, and good cheer to march on in their honourable resolve to obey God’s commandment by doing good. Sooner than later, your reward will come from God and His people.

The Intimate Story Of Born Photo In IBADAN was last modified: January 6th, 2022 by Lekan Alabi

The Best Food For Your Age Revealed!