The Many Battles I Fought To Become King In SURULERE – Popular LAGOS Socialite, Oba BUARI OLOTO 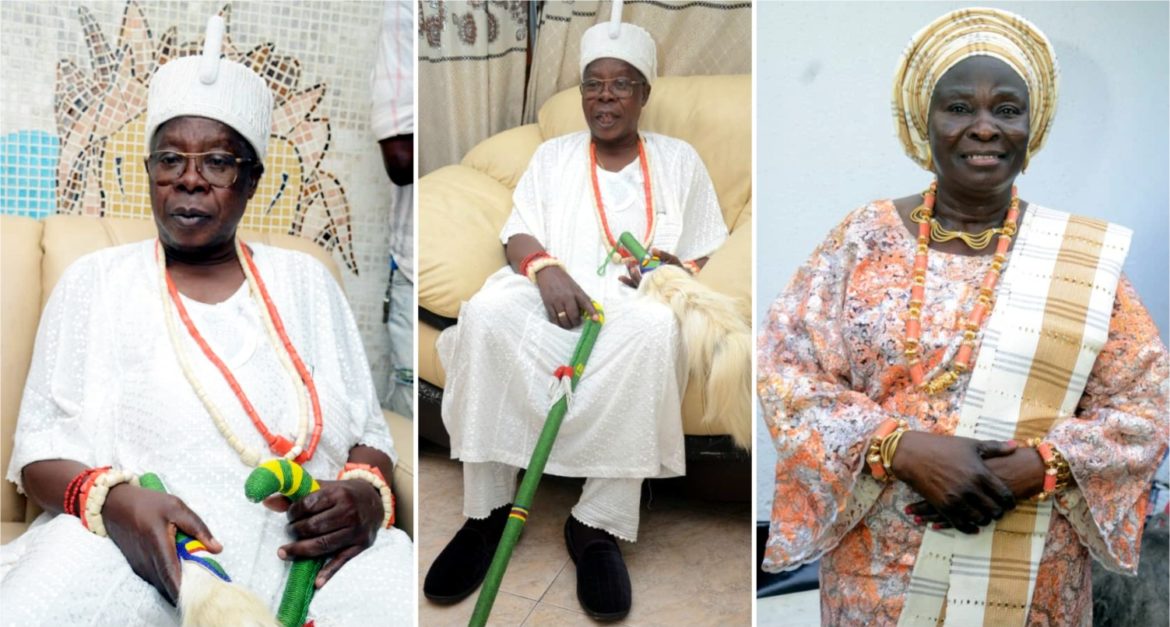 Foremost Lagos socialite who has been dominating the Lagos social scene for over 40 years, Alhaji Buari Alade Oloto will no longer be addressed as “Abu Oloto”.

This is because few days ago, he became the King of Iguruland, Aguda Surulere, Lagos. Iguruland is in Aguda Surulere and it is the first time they will be having a king since the 19th century. Those who know reveal to this magazine that Iguruland is like the origin of many Aworis in Surulere.

Since Oba Buari Oloto, the CEO of Abu Oloto Investment became king 3 weeks ago, his abode Castle of Peace in Aguda, Surulere has been turned to a Mecca of sought as many socialities of note have turned his abode to “Mecca”. His white luxury mansion has witnessed an array of prominent Lagos Kings including Oba Itireland, Surulere, Lagos.

While the Onigbedu Oba is always ready to welcome guests, they also wake the king up every morning.

Visit his “Castle of Peace” in Surulere Aguda, and you will be surprised by the number of people who visited him on daily basis.

While you are appreciating the caliber of society women who visit his abode, the celebrity women in Lagos have now made it a point of duty to visit the latest Oloori, Alhaja Alimot Shadia (Iya-Oyo).

Who won’t love ebony pretty, Iya Oyo who has been rocking Lagos social scene for over 40 years with her husband, Abu Oloto?

This celebrity couple must have been rocking the scene for over 4 decades, yet they have been able to keep the tempo high.

How does he feel being the king? How does it feel to be the king of Iguruland of Aguda, Surulere?

How many years did it take him to be king? This was part of the questions which comes to mind as we stormed his mansion at the “Eta Day”, (3rd day of becoming a king).

Speaking to the latest Oba in town on how he feels to be the king, he said his joy knows no bounds.

“I want to say that I am highly favoured to be the king. It makes me feel fulfilled. I thank Almighty Allah for his grace and mercy on my life. We were among many who were given a certificate as king by the Commissioner for Chieftaincy Office, Lagos State and we want to thank my people and the entire Oloto family. May they always be blessed, he revealed”.

Looking handsome in white Swiss lace, the new Oniguru of Iguruland, Aguda, Surulere said his mission and vision is to reposition the entire Iguruland among other cities in Surulere, Lagos.

“We will ensure that we work along with the government of the day. We will also make sure we ensure a clean environment. We will make sure we facilitate many of our youth to be gainfully employed. We want an environment devoid of atrocities, crime and this we will do.”

“I am known to be a disciplinarian, and we will ensure a good friendly environment devoid of crimes.”

How did Oba Alade Oloto start his life? “Well, I started my life as a real estate player. Ask anyone, you will be told that, I, Alade Ishola Oloto, the son of Oto does contract too. I also do buying and selling. I also do real estate. I am also Estate Agent to the core. I sell land and houses. That is where I make all my money back then. I have many chains of business.

Who are your parents? “My parents are prominent before they are dead. I am from Iguruland. Itire Iguru. My mum is from Itire. I have been in Iguru for many years. So, for me, it is like I am back home. I grew up in Iguru, Surulere. Iguru is not new to us. My father was the foremost landowner.”

“Though Iguru has never had a king but our forefathers are from Iguru and they always say Iguru, and Itire are the same. For me, I feel good coming back home after spending many years in Itire and Aguda. I remember while I was young, I use to ask my late father how he came to Iguruland, he said it is his own town.”

“Many non-indigenes like Hausa were even my father’s friends, back then. So there is no discrimination between us in this town.”

How long have you been on this Obaship struggle in Iguru, Aguda?

“We have been on Obaship title for over 10 decades.”

“Even our forefathers tried to be king because they were all Baales. We have been having Baales in Iguruland, Aguda since 19 century till date. So it is not new that we are just having a king. We have had many Baales. It was when we saw that the town is now full that we went to the government to give us a king. We were told to go to Tribunal and we were given justice to have a king. We got the judgement and we were told to now have a king. That is why we are not using Olu. We use “Oba”. Of course, there is no way there won’t be rancour between children of the same parents but that is bygone now, as we have settled all this. It took us 17 years to have Oba in Iguruland, Aguda, Surulere. But we thank God all this is bygone now.”

Giving his Vote of thanks, Oba Buari Oloto thanked the Executive Governor of Lagos State. He said that Rufi/Ikoyi Ruling House thank the government of the day. He sent special thanks to the Local Government Chairman and the entire family and friends.

Before becoming the Oba, he was the head of Itire Royal family.

Late Barrister was a very close Sponsor and confidant of late Sikiru Ayinde Barrister. They were so close that the late musician in one of his albums titled “Aye” narrated how he and Oloto travelled to Disney World.

In the album, Sikiru Ayinde gave a clear account of their experience in a Submarine from where they beheld sharks, whales and other fearful aquatic creatures.

READ ALSO: I LEARNT ALL I KNOW ABOUT ASO-OKE FROM MY MUM – RONKE FAWOLE