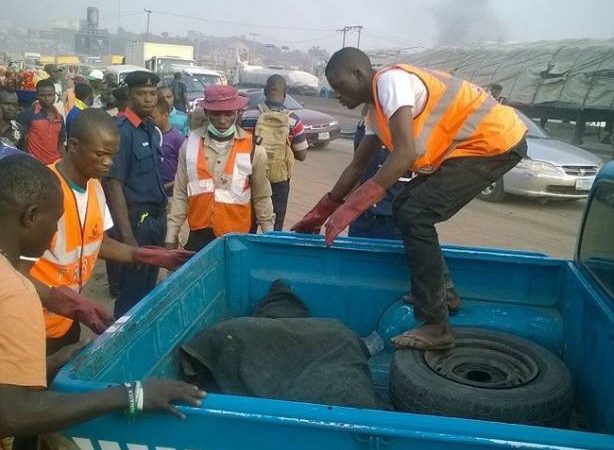 The Federal Road Safety Corps (FRSC) in Ogun says four persons died while six others sustained injuries in three separate accidents in the state on Friday.

Clement Oladele, Sector Commander of FRSC in the state, gave the details in an interview with the News Agency of Nigeria (NAN) on Saturday in Ota, Ogun.

Oladele explained that the first crash occurred at about 10.30 a.m. due to tyre burst and excessive speeding at Abeokuta-Sagamu route, near Showo.

He said that five persons were involved, with three sustaining varying degrees of injuries, but no fatality.

“The three injured persons were rescued and taken to an undisclosed hospital for intensive treatment,’’ he said.

The commander said that the second crash happened at about 1.30 p.m. around Arepo Bus-Stop, on Lagos-Ibadan Expressway.

While one person died, two others sustained injuries.

“The corpse of the victim has been deposited at Idera hospital morgue while the survivors are receiving medical attention at ROA Hospital, Arepo in Ogun.’’

The accident, according to Oladele, happened at about 7.49 p.m. due to route violation and driving against traffic around the long bridge on Lagos-Ibadan Expressway.

The commander said that car drove against traffic and rammed into the motorcycle that led to the death of three male adults while one person sustained injuries.

“The corpses of the victims have been deposited at Idera Hospital morgue while the survivor is also receiving treatment at the same hospital,’’ he said.

Oladele advised motorists to drive cautiously and desist from driving against traffic to avoid unnecessary loss of lives.