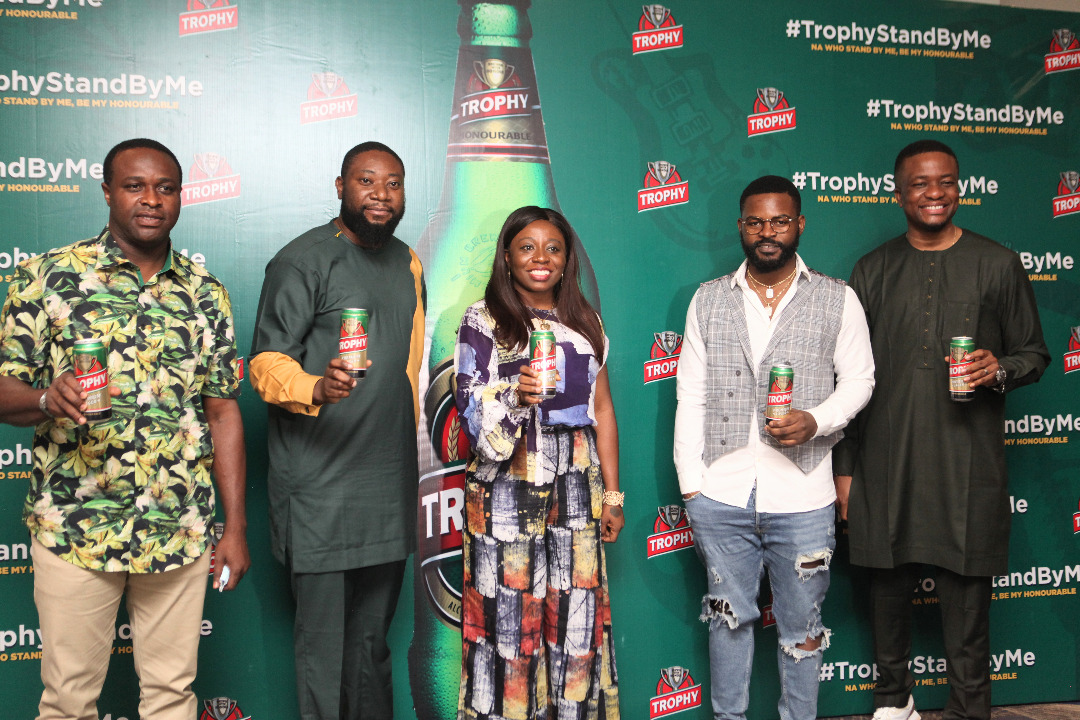 Nigeria’s leading brewery companies International Breweries Plc have recently been introducing new beer variants to expand their consumer base. Their innovations are channelled around flavours, spices, bottling model and varying content mix. The brewers are also using high-quality ingredients and special brewing techniques to produce superior products that meet the taste of the consumers. Trophy Lager has continued to lead the pack in this regard, setting new records for over 5 years.

Indeed, Trophy Lager has created a massive buzz in the media space since the “Na Who Stand By Me, Be My Honourable” creative advert came online. The 2:28 minutes video portrays the essence of true friendship when in need and the significance of loyalty.

Hot on its heels of launching, International Breweries Plc has decided to extend the hand of support and push to their loyal customers and other Nigerian brewing creatives who are striving to survive amidst the stiff economic challenge of the country with the Stand By Me Challenge. This creative modality was made known at a press conference organised by the brand on Friday, 03 September 2021 at the Southern Sun, Ikoyi Lagos.

The press conference to announce the launch of the cause was held at the Southern Sun Hotel in Ikoyi, Lagos and had in attendance top officials of the International Breweries Plc, Trophy Brand Ambassadors, Folarin Falana (Falz) and Femi Adebayo as well as journalists and bloggers from the print and online media.

Speaking at the event which marked the commencement of activities, Marketing Director, International Breweries Plc, Mrs. Tolulope Adedeji described the initiative as a gesture of support to the millions of budding creatives looking to find their feet in a tough and unpredictable Nigerian market.

“Trophy Lager is making a bold statement to stand by creatives in Nigeria. I am talking about comedians, musicians, artists, general arts, and people who’ve got a creative side inside of them and are waiting for a platform or someone influential to stand by them. This is what Trophy is here to do today. It is very important to us that we are there for our consumers and stand by them while they discover themselves.

“Trophy Lager aims to relieve unemployment pressures, that most people are facing amid these challenging episodes across the world. We know what’s been happening around the world; the global pandemic that has ravaged the world for over one year and how it has affected a lot of industries, especially the creative industry, because of the restrictions.

“We are acutely aware of the challenge of unemployment that continues to plague millions of young people in Nigeria, and creatives in particular, therefore, we considered it important and are delighted to be launching the “Trophy Stand By Me” initiative in fulfilment of our desire to lend a hand of support to the numerous creative talents that abound in the country,” she said.

While fielding questions from journalists, Adedeji revealed that the primary targets of the campaign are creatives who are into photography, dancing, acting, music, comedy and the general arts, stating that interested persons will be required to interpret “Na Who Stand By Me, Be My Honourable” theme of the initiative through their art in a 60 seconds video featuring Trophy Lager.

She also explained that participants are to post on their personal pages using the hashtag #TrophyStandByMe and state their art category with the hashtag #Comedy #Acting #Photography #dancing or #GeneralArts depending on what they do.

According to Adedeji, “At some point in our lives, we have all needed to lean on other people for support whether we were looking to secure a job or start a business or get into a programme. The people who stand by us and display unwavering commitment on our journey to achieving our goals are the inspiration behind the Trophy Stand By Me project.”

“We are encouraging creatives to go out there and interpret, “Na Who Stand By Me, Be My Honorable” in their own ways.

Shedding more light on the entry process, Marketing Manager, Trophy, Bamise Oyegbami stated that participants must be following all Trophy’s social media pages and entries are to be posted on all relevant brand social pages within two weeks of the commencement of the initiative. Prospects must also get their Honourables to stand by them by liking their posts.

“After a thorough shortlisting process, 100 winners who will receive an N100,000 allowance from Trophy for three months will emerge. In the second and third months, they will be assessed and pruned to 70 and 40 respectively after performing a series of tasks. And in the fourth month, the 20 winners who will also have a real-life mentorship and coaching from Falz, Femi Adebayo, Tunde Demuren and so many other coaches would be there to really stand by them. Upon the assessment by the industry leaders who double as coaches, three final winners who will receive one million naira contracts each will be selected,” Oyegbami explained.

While urging musicians, artists and other creatives to leverage the opportunity Trophy lager is providing by participating in the project, the Trophy team reiterated the desire of the brand to live up to its promise of standing by its teeming consumers by making life better for them.

“We look forward to receiving all the amazing creative expressions that the Trophy Stand By Me project will birth as we spread the message of loyalty, kindness, and support among our consumers,” he noted.

Nigeria’s leading hip hop act, and ambassador, Falz commended Trophy Lager for the initiative and encouraged the brand to keep up the good work. He also urged Nigerian creatives to key into the #NaWhoStandByMe campaign to benefit from the package.

The Nollywood star actor stated that the conference is an official announcement of what Trophy Lager has been doing over the years and that he’s not surprised about the new initiative. He added that his 6 years of ambassadorial relationship with the brand has taught him that creativity is the mother of greatness.

Captain Tunde Demuren, who was also at the official unveiling of the campaign said at a time like this, Trophy has done well to have decided to deploy this means to reach out to thousands of Nigerian youths who have specifics gifts but couldn’t get the push.

He assured that all the prospective subscribers to the campaign will get a mentor to stand by them, and so will Trophy Lager.

Consumers are urged to check Trophy’s social media pages for further information as well as terms and conditions.

The “Trophy Stand By Me” Initiative will run from October 2021 to January 2022 and is only open to individuals who are 18 years and above.

In Nigeria, IBPLC is the proud producer of Trophy, Hero and Budweiser beer brands, including Beta Malt & Grand Malt.

Trophy to Splash Millions on Creatives To Relief Unemployment In Trophy Stand By Me Initiative was last modified: September 3rd, 2021 by Seun Emmanuel

Trophy Launches “Na Who Stand By Me” Campaign” For Nigerian Creatives