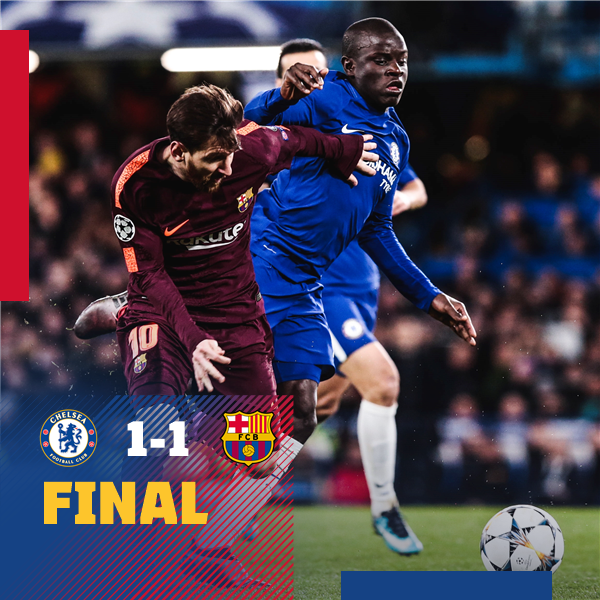 Chelsea will “try to do something incredible” by knocking Barcelona out of the Champions League, said manager Antonio Conte after a drawn first leg.

Willian put the Blues ahead at Stamford Bridge, but Lionel Messi capitalised on an error to ensure the match finished 1-1 by netting 15 minutes from time.

Barcelona, who are seven points clear in La Liga, had barely threatened the hosts before their equaliser.

“We were close to playing the perfect performance,” said Conte.

“We made one mistake. It is a pity and we are disappointed with the final result.”

Chelsea twice hit the post with strikes from outside the area from Willian, before the Brazilian scored at the third attempt with another 20-yard effort.

However, 13 minutes later, Andreas Christensen played a loose pass and Andres Iniesta linked up with Messi, who scored his first Champions League goal against the London club.

Christensen, 21, had made only three appearances for Chelsea before this season but has played 31 times for the club this campaign.
After selecting him ahead of England centre-back Gary Cahill, Conte defended the Denmark international.

“It was an incredible performance,” said the Italian. “We are talking about a very young player. It is great that he is able to play this game with maturity and personality. He was one of the best players.

“It is very difficult to mention one player but I think Christensen played a top game and I was very pleased with his performance.

“We made one mistake but we know against these opponents and players like Messi, Iniesta and [Luis] Suarez if you make a mistake you pay.”

The return leg takes place at the Nou Camp on Wednesday, 14 March.

Chelsea last played there in 2011-12 and, despite having John Terry sent off in the first half, drew 2-2 to gain a 3-2 aggregate win in the Champions League semi-final. They then beat Bayern Munich on penalties in the final.

“It won’t be easy,” added Conte. “We must be realistic because we are talking about Barcelona and they showed they are a really strong and fantastic team.

“But we also showed we are ready to work really hard in defence and have the right feeling when we get the ball to create the chances to score.

“We can try to do something incredible in the Nou Camp and we must play an intelligent game – we are not stupid.”