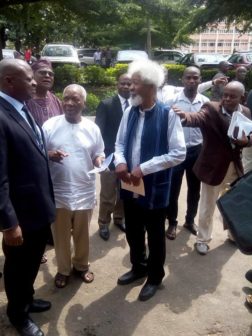 The aged arts theatre will now be known as “Wole Soyinka Theatre”.

The programme was almost marred when the guest lecturer, Professor Ahmed Yerima slumped while delivering his paper. He was revived and later rushed to the institution’s health centre in an ambulance. However, the master of ceremony, Longley Evru, who promptly noted, “the show must continue”, helped the lecturer to read the concluding part of the paper.

Soyinka, who was presented a bottle of wine by the organizers, appreciated the honour bestowed on him by the institution.

According to him, Soyinka deserves every honour the institution could bestow on him giving his contribution to the institution, Nigeria and the world at large.

In the same direction, the Head, Theatre Arts Department, Prof. Matthew Umukoro who noted that Soyinka is a global icon for scholarship and creativity pointed out that re-naming the Arts building after the literary icon was a befitting honor to the one that has brought so much honour to the university.

He said, “Our vision has been to see the Arts Theatre transform into Wole Soyinka Theatre, expanded and modernised to meet the technical and technological challenges of the twenty-first century. We intend to take the dream further by launching a Wole Soyinka Theatre Endowment Fund to raise the capital required for actualising our goal. We are also happy that Geoffrey Axworthy, the literary mentor of Wole Soyinka is also being doubly honoured with the renaming of the Practical Theatre as Geoffrey Axworthy Studio”.

In his paper titled, “Geoffrey Axworthy and the Modern Nigerian Theatre”, Yerima who practically eulogized Axworthy all through noted that Axworthy met a fledging Nigeria with a lot of young artistically creative and brilliant minds. He said that Axworthy was impressed with the rich cultural history and the evident cultural diversity of the country’s major tribes, adding, “Coming from a similar British culture of magical stories and wonderful world of communal theatre, Axworthy knew that a proper blend and exploration of the cultural content of performances would make theatre emotionally moving and thematically satisfying and relevant to the growing Nigerian nation. He acknowledged the existence of early performative activities, communal theatre activities, and sought ways to find a synergy, which would enable the town to benefit from the gown, without each one losing its original essence”.

According to him, Axworthy was also aware of the early efforts of young creative minds such as J.P Clark, Christopher Okigbo and the Mbari efforts at the time stressing that Axworthy did not meet a creatively dormant Nigeria.

READ ALSO: NIGERIANS MUST FLUSH OUT BUHARI FROM POWER IN 2019 – LAMIDO