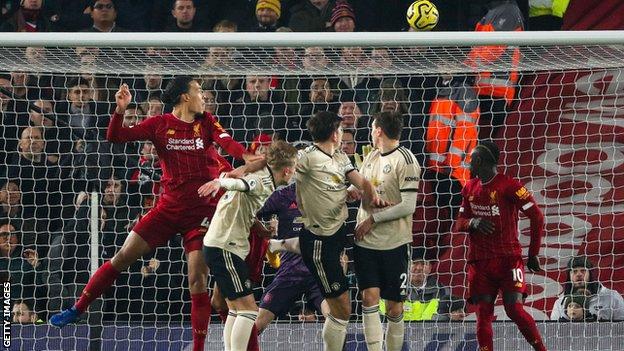 Liverpool’s procession towards their first title in 30 years continued with a hard-fought win over Manchester United at Anfield. A win that extended their lead at the top of the table to 16 points with a game in hand.

Jurgen Klopp’s side were the superior side but faced late United pressure as they defended Virgil van Dijk’s 14th-minute header before wrapping up the win in style in injury time – goalkeeper Alisson’s long clearance setting Mohamed Salah clear to spark wild celebrations among supporters now convinced that long wait is coming to an end.

Liverpool could have emphasised their superiority as Roberto Firmino had a goal contentiously ruled out by VAR for Van Dijk’s foul on David de Gea, while the United keeper touched Jordan Henderson’s shot on to the post and Salah missed an open goal from six yards.

United, who saw striker Marcus Rashford ruled out for a lengthy period before kick-off with a back injury, actually had chances of their own as Andreas Pereira turned wide of an open goal in the first half and Anthony Martial blazed over the top from an inviting position after the break.

It came as Ole Gunnar Solskjaer’s side rallied in the second half, but it was to no avail as Salah struck and Liverpool march relentlessly on, with 21 wins from their first 22 games as United, the only team to take points off them this season, were beaten.

It is simply a case of when the coronation comes as Liverpool reeled off yet another win en route to the Premier League title – not only doing their own job but watching in satisfaction as the chasing pack, chasing from afar it must be said, fall further behind as Manchester City and Leicester City drop points.

There was rare anxiety around Anfield in the closing minutes before the sweet release of Salah’s goal – Alisson rightly running the length of the pitch to join in the celebrations after his long clearance sent the Egyptian clear to score.

Liverpool could have wrapped up victory more comfortably, but with the imperious Van Dijk at the back and the menace upfront, it is hard to see how they can be stopped in one game – they certainly will not in this title race.

And, of course, victory was made even sweeter as it was at the expense of Manchester United, the old foe who famously fulfilled Sir Alex Ferguson’s promise to knock Liverpool off their perch.

United now trail Liverpool by 30 points and this is not a gap that flatters Klopp’s men.