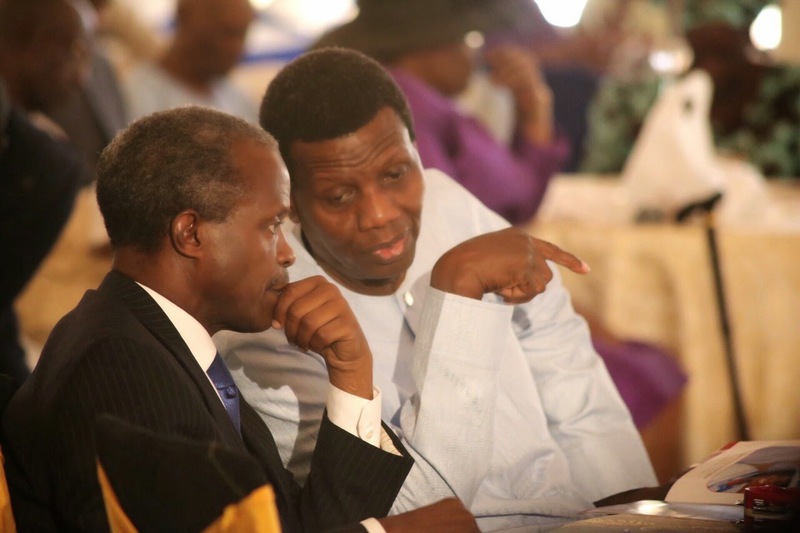 Nigeria’s Vice President, Prof Yemi Osinbajo is one of the leading Redeemed Church pastors in Nigeria.The man of God who turned 60, few months ago, was the Pastor in charge of the Lagos Province 48 (Olive Tree provincial headquarter) of The Redeemed Christian Church of God, Banana Island,Ikoyi before his inauguration into office as the Vice President of Nigeria.

Though he is still a pastor of the parish contrary to some speculations that he has resigned as RCCG pastor. He however still insists that he remains the pastor-in-charge of the said province and according to him, he is only on loan to the Federal Government. Not too many people know that Prof Yemi Osibajo enjoys a robust relationship with the General Overseer of the Redeemed Christian Church of God, Pastor Adeboye and are very close even before he became Nigeria’s VP.

Pastor Yemi Osinbajo gave his life to Christ in 1993 and began  his journey to the ministry and becoming a pastor was a motivation when his path crossed with the senior pastor of House of Freedom,This Present House church in Lekki, Pastor Tony Rapu who was one of the pastors close to Pastor Adeboye and who amongst many others changed the face of Redeemed Church with the establishment of model parishes.

It was a worthy encounter when their paths met as far back as early 90s and that was what changed Prof Osinbajo’s life thus starting a new life in Christ during an annual programme organised by the Redeemed Church. Ever since that day, 24 years ago, Prof Yemi Osinbajo has risen through the hierarchy and finally became a pastor in charge of one of the most popular Redeemed Church parishes in Lagos. That was the beginning of his countless encounters with the general overseer of redeemed church of God, Pastor Enoch Adeboye for the past 24 years.

Prof Yemi Osibajo has no doubt found a father in his spiritual mentor, Adeboye as he has enjoyed enormous support from him in the course of serving his country. Two years ago, Prof Yemi Osibajo was the one who delivered pastor Adeboyes 73rd birthday lecture.

Few days back ,during the launch of Pastor Adeboye’s new book, Prof Osinbajo disclosed that he always sought the counsel of Papa Adeboye before he does anything,He disclosed that the only two people he consulted before accepting to be vice-president to President Mohammadu Buhari in 2015 were the General Overseer of the Redeemed Christian Church of God, Pastor Enoch Adeboye; and his own wife, Dolapo.

Few days back, he disclosed this during a remark at the public presentation of a book, Pastor E. A. Adeboye: His Life and Calling, at the auditorium of the RCCG Youth Centre, Redemption Camp, on the Lagos/Ibadan Expressway. Osinbajo said because he was not a politician when the opportunity came, he could only seek the consent of two persons as stated.He said, “And those two persons are my wife and Daddy (Pastor Adeboye).

Over the years, Daddy had been instrumental to my spiritual growth. I consulted Daddy and he gave me the go-ahead to accept the vice-president position. Before then I was not a politician.”

Prior to that he also revealed papa Adeboye’s prediction on his emergence. Professor Yemi Osinbajo, disclosed that his emergence as the incoming number two man in the nation was predicted by his spiritual father and General Overseer of the Redeemed Christian Church of God (RCCG), Pastor E.A. Adeboye. He stated this on Friday,May 1, at the May National Holy Ghost Service of RCCG at the Redemption Camp during testimony time.

While it was his turn to give his testimony, the VP elect who pastors the Lagos Province 48 of the ministry, said: “My name is Yemi Osinbajo and I’m here to testify to God’s goodness. For the past four months, we have been campaigning all around the country by sea, air, road and God has kept us and by March 28, He gave us victory at the poll.”

“God marked me out for the position of the vice president of the Federal Republic of Nigeria.”

According to Osinbajo, “he is part of the fulfilled prophecy made by Pastor Enoch Adeboye, that in RCCG, there would be pastors, presidents, vice presidents in the church.”

Prof Oluyemi Oluleke Osinbajo, the Vice President of the Federal Republic of Nigeria is also a Nigerian Senior Advocate, Professor of Law and a Senior Partner at a law firm. Yemi Osinbajo was educated at Corona Primary School, in Lagos.He attended Igbobi College Yaba, Lagos then studied for his undergraduate degree in Law at the University of Lagos, where he was awarded a LLB Law degree. He attended Nigerian Law School and was awarded a Master of Law after attending the London School of Economics. From 1979–1980, Osinbajo served the compulsory one year youth service as a legal officer with Bendel Development and Planning Authority (BDPA), Bendel State.

He was once again employed as a Professor of Law, Department of Public Law, Faculty of Law, University of Lagos. In 2007, Osinbajo was made Senior Partner, Simmons Cooper Partners (Barristers and Solicitors), Nigeria.Osinbajo was also a Senior lecturer at the Lagos State University.He got his LLB degree from the University of Lagos.He is the Chairman of the University Board of Trustees (BOT) and a senior partner at SimmonsCooper Partners,former Attorney-General of Lagos State and former Commissioner for Justice.He has authored several books on civil procedure in Nigerian superior courts, rules of evidence and justice reform. Prof. Yemi Osinbajo has more than 31 years of litigation experience including significant trial and appellate work.He is happily married to Dolapo Osinbajo,the grand daughter of late chief Obafemi Awolowo, with 3 children.

How VP, OSINBAJO Became Close To Pastor ADEBOYE The Story Of Their 24 Year Relationship was last modified: August 31st, 2017 by Tayo Oyediji