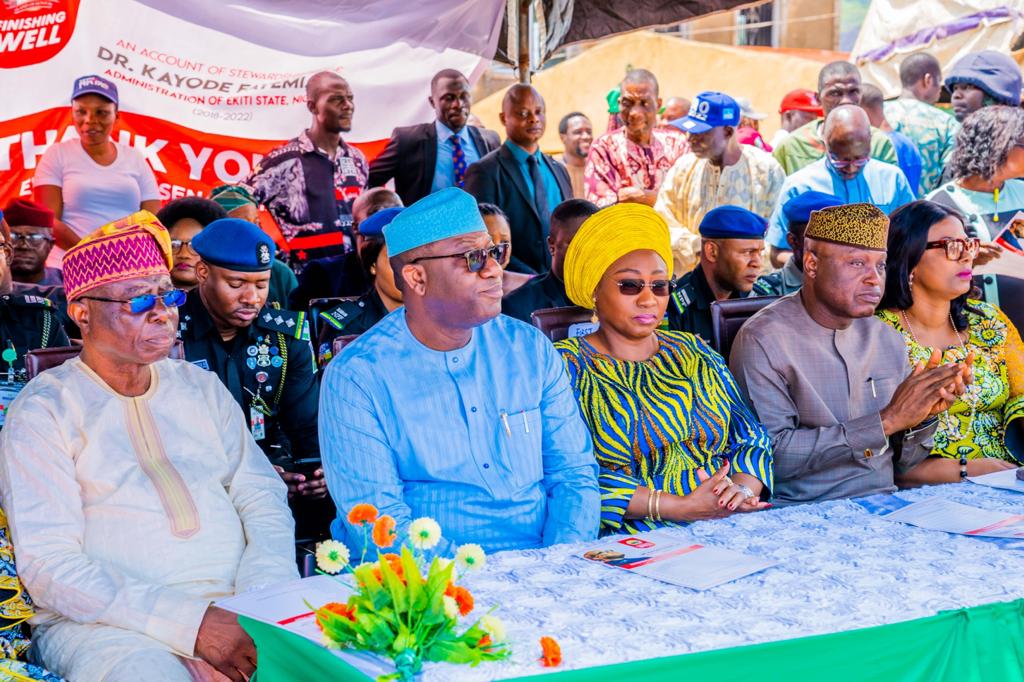 Ekiti State Governor, Dr Kayode Fayemi has said his administration, in the last four years, has delivered on its campaign mantra to restore the values of Ekiti people and reclaim the land for progress and development.

Dr Fayemi made stated this in Ikere- Ekiti on Tuesday during his “thank you” tour of the Ekiti South Senatorial District, as part of activities marking the end of his tenure.

The Governor, who enumerated his achievements in the region to the admiration of the cheering crowd, explained that his administration had performed well in the areas of education, human capital development, health, social security, social amenities and infrastructural development both in the southern district and other areas of the State.

According to him, “It is easy to forget that when we embarked upon this journey four years ago, Ekiti was still in the dungeon we had a lot of challenges and we promised to restore the value of our people and reclaim the land for progress and development and I believe four years down the line we have discharged that duty to the best of our ability.

“I think we can tick the box in all of the areas in which we pledged to make life better for our people whether in education, human capital development, with knowledge economy in our mapped pillar or the area of social investment where we pioneered Owo Arugbo, Ounje Arugbo and support for the weak and the vulnerable in our society or in the prosperous development, you can refer to so many roads that we have done leading up to the economic active of the State

“Whether the Aramoko, Ikogosi or you talk about Ilupeju, Ire, Igbemo, Ijan or you talk about the one in the south senatorial district, Ikere itself, Emure, Agbado, Ode, Isinbode Obo, and several of other infrastructural development here in the south, we fully reconstructed and rehabilitate the Egbe Dam, supplying waters to at least four of our 16 local governments, and a number of other local governments in our neighboring Ondo state.

“We have upgraded the College of Education here to the University of Education, Science and Technology and named it after our revered leader Bamidele Olumilua to complement the work of our other State, Federal and Private universities in Ekiti State.

“The airport and the Knowledge Zone are actually in the southern district, it goes as far as Ise, Ijan, Igbemo, Afao, and Araromi Obo in addition to being in Ado Ekiti. You can see that the airport is extensive and the Knowledge Zone that is linked to is going to constitute in the near future an airport city because of a lot of development that will happen there will be to the benefits of this new conglomeration of activities we are going to be having in that sector.

Expressing gratitude to the people, Dr Fayemi noted that the privilege to serve as Governor in the state gave him the chance to become Chairman of the Nigeria Governors’ Forum (NGF) and President, Forum of Regions of Africa (FRAS).

“Gratitude to our people in Ekiti State, particularly to the people of Southern Senatorial district, this thank you tour is to the south and the people of the south senatorial district have been good and gracious to us a government and they have been so good to us as a party if we checked the result of the last election, you will see that our governor-elect received overwhelming support from the southern part of the State as well.

“To that extent, we are grateful for the opportunity we have been given since 2018 up till now and for the earlier opportunity between 2010 and 2014 and of course opportunity of our predecessors and party leader between 1999 and 2003.”

Representatives from each of the six local government areas in the senatorial district also gave testimonials about the Fayemi administration, citing different projects of the administration.