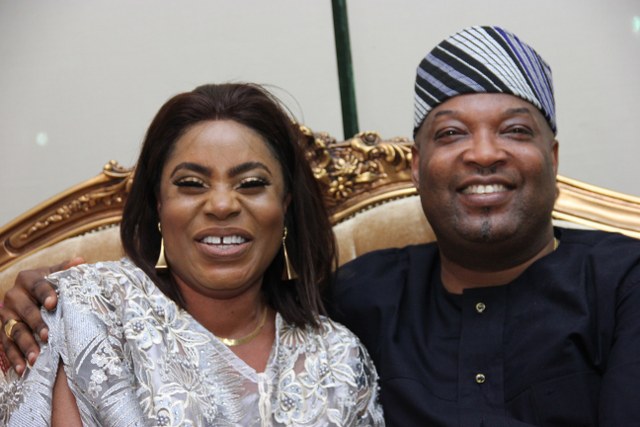 On Friday, 02 April 2021, the Group Managing Director of Adron Homes clocked 46. Gifts, Prayers and warm wishes were sent in full scale, but it is the tradition of the real estate guru, to visit the less privileged on his birthdays. There was no loud celebration as he was busy visiting prisons, hospitals, and orphanages,

However, friends and family who could not contain their excitement and gratitude to God on behalf of the Akile, as he’s fondly called, stormed his Ilishan’s Emperor Mansion to pay him a surprise visit and volunteer to throw him a low key, but classy birthday party.

Within a couple of hours, invites have been sent and received, as friends, colleagues and staff of Adron Homes mustered at the Ilishan country home to celebrate the jolly good fellow.

The birthday celebration was a small, but classy type, as the celebrant was treated to a memorable event by his staff and loved ones. The guests who were no more than 50 at the event were all dressed glamorously in honour of the great man whose tribute inspired many as a humble, kind and loving husband, father, dedicated and hardworking boss and a loyal friend.

The party was very brief but eventful, with optimal adherence to the covid-19 protocol. As brief as it was, Aare Adetola Emmanuelking was still able to squeeze a moment to change lives. A young and upcoming artist, Olu Corper, who performed that evening did not how he will be going home with a brand new car.

Aare, in his usual philanthropic and benevolent gesture, gifted the fast-rising singer, Akinsanya Isiaka Adekunle, also known as Olu Corper, a brand new Toyota Camry. The music act who could not contain his delight, fell flat before Aare to appreciate the good gesture as tear of joy flow from his eyes.

Amebo Media also took time to felicitate with the celebrant and seized the opportunity to present the Ogun State Man of The Year Award to Aare Adetola Emmanuelking who polled over 8,000 votes in the Ogun Man Of The Year Contest.

The most fascinating and touching moment of the event was when the Aare took to the stage for his brief speech. The 10-minute speech was a life-changing moment for most people as the Akile took time to reminisce on the rough road to success and how Adron Homes was birthed 9 years ago.

Aare Adetola is not only a genius when matters of real estates are discussed. He is equally blessed with words of wisdom that can only befit men who are of the peculiar and divine gift of the gospel. His story was not only touching but also challenging. Aare is living proof there’s a God should anyone needs a reason.

Read his word of exhortation below:

I never planned to have my birthday. You know every year, we visit the less privileged, go to the hospital, go to the prisons, after all the whole exercise, we drove down to Ilishan and got here around 11 pm, then the security told me that I have some friends at the gate.

I said let them enter. They came and said they want to celebrate my birthday with me. I felt ah, but it is late already, but they came in anyway and they made the rest of the evening very entertaining. Close to 10 of them were with me and they said, Akile, we are celebrating in a big way and they started donating in millions. I felt highly loved, and I said this can’t be for us alone, let’s call people, let’s celebrate together and this morning we sent out the invite, and see how many of you turned out. I really feel highly loved. It’s not about money at all.

People even came from Lagos. This is certainly not because of food. They all have food at home but they all took the journey miles away from their homes and drive down… I am very grateful. Thank you.

Let me take this moment to tell you why always celebrate my birthday every year with the less privileged.

It is because every year reminds me of the fact that I shouldn’t be alive. Before now I do not believe in the need to celebrate my birthday.

But in 2011, I just bought a car… I have bought my first and second car before then. That year, I bought my first SUV. It happened that my father was sick and I was set to go and visit him.

On my way, I was attacked by armed robbers, and I was shot.

It was when I saw the armed at federal SARS that he told me that, they said he should kill me. He was shocked that I was still alive. He said, “how did you do it, you are supposed to be dead”.

I later gathered that the guy just joined a cult and he said before he can be accepted, he must kill somebody. He shot me on the leg, I was down and screaming in excruciating pain. When they were going into my car, they pointed the gun at me and shot again, how I missed that second gunshot, I cannot explain.
So, every day I think deep about my story and feel there wouldn’t have been Adron Homes If I had been killed that day.

It was after this that I was laid off in my place of work because they feel that I have become a burden to the organization. The Managing Director later met me and said that was his greatest mistake.

Again when Adron Homes expanded to Abuja, I met a friend who came to visit me in my suit in Sheraton. He came, we popped Champaign and was enjoying ourselves and suddenly, he began to beg me for forgiveness. I was shocked because I was not aware of any way he felt he may have offended me.

He just kept saying, “You have to forgive me”.

He later told me the day he visited me at my place in Iju Ishaga, and saw the condition of my leg, he said in his heart that if I call him, he will never pick my call again, because I could only call to beg for money.

I didn’t know, but God saw his heart.

The man that picked me up was an angel, right there when I was still at home, the man called me and said, I have a business for you”.

I told him, but I am in the hospital, and he said he knew, but insisted he will do business with me because he has seen that I am a man of integrity. He gave me a contract of 20 million naira he first gave me 4 million naira, and that’s how we launched Adron Homes. Adron started in my bedroom on my sickbed.

When I saw the alert of 4 million, I stood up, my leg suddenly straightened up (laughs).  I had to go and collect the C of O of the man’s land. God is my testimony. I have seen the hand of God.

I recall the drama I was part of, way back when I was young. The character I played back then at New Covenant church is a young guy who had distributed his CV at many companies, eventually, he met God and gave his life. Immediately after accepting Christ, they started calling him from all the places where he had submitted his CV.

The new experience was a replica of that drama.

I was given a retrenchment letter. They made me realise I have become a burden. Funny enough, I have just earned 6 million for the company, and my colleagues could testify it was the money that was used to pay salaries.

I requested to see the GMD but they said he has travelled. I was shedding tears.

Barely thirty minutes after I got the letter, I got a call from someone we have been looking for, for about two years earlier just called and said the money is ready and stated clearly that he doesn’t want to do business with my company, but me. I said No sir, but he insisted it is me he wanted to deal with me, but I refused.

I called my company and gave them the update and told them, you see, I’m your blessing. And they said they will tell the GMD to reverse the decision.

So, my wife came back from work and said, “See, you cannot return to work o. the retrenchment letter, I kept it under the pillow. She just prayed that God will open doors for me.

And those days it usually takes three days for the alert to enter. They called me that day that they have seen an alert but will get the cash in three days. The second day, as my wife was about to go to work, I just called and said “Woman, I have been sacked!

She was worried, and she told me, “and you still want to give your company this business? I told her my time has not come.

You know women, God created them as our signal. Even Jesus was about to start his ministry and they came to his mother at the marriage ceremony, and she told them, “whatever he says, do it”.

Even when Jesus said his time has not come, she insisted they go to him and do whatever he instructs them to do.

I told my wife I am loaded, that when I am fully healed, I will start. But she insisted that I start immediately.

So, I could not sleep. I called the man on the last they that the money would have dropped into the companies account.

Immediately I call the man, he called the bank to revert the payment, then he sent the money to my own account. He asked if I have seen the alert, I said yes.

So he said “okay now we can talk”

I want to tell you something: since the day that I bought the land, the man has not collected the land. The land is located along the express.

9 years ago, since I bought it, the man has not collected the land. The man is an angel, and I pray this evening: ma God send you an angel.

What I went through before I set up Adron Homes 9 years ago – GMD Aare Adetola Emmanuelking was last modified: April 12th, 2021 by Reporter

How ASIWAJU Plans To Win The Key Northern States