What they do not tell you about Soya bean oil 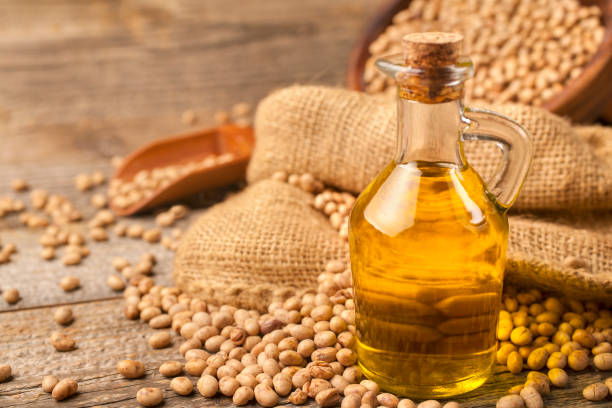 The market shelf is packed with a variety of cooking oils, but not all contain the right balance of beneficial fatty acids, minerals, and vitamins required to guarantee optimum health. As a consumer, making the decision on the right type of oil to use can be difficult when you do not have all the facts or have been constantly misled by false advertising by various vegetable oil brands.

When choosing an edible oil brand, it is important to ensure that the benefit of the brand is all-encompassing like Soya bean oil. Beyond being healthier than other “healthy” vegetable oils due to its good variety of essential fatty acids, the vitamin and mineral content of the Soya bean rounds out the healthy aspects of this delicious and widely useful legume. Now, let’s take a closer look at some of the health benefits of Soya bean oil.

Opting for Soya bean oil means your body gets its supply of vitamin D, which helps regulate the amount of calcium and phosphate in the body. It is also needed to keep bones, teeth and muscles healthy. Vitamin D prevents bone deformities such as rickets in children, and weak bones which could result in frequent bone fractures caused by a condition called osteomalacia in adults. Furthermore, it supports immune and nervous system health, while regulating insulin levels, aiding lung function and cardiovascular health.

Another nutrient contained in Soya bean oil is vitamin E, which promotes skin health, prevents inflammation, and helps the skin retain moisture. Though many people still hold the belief that all cooking oils are to be blamed for oily skin, the vitamin E content in Soya bean oil is an important fat-soluble antioxidant that is capable of preventing skin damage and may be used for the treatment of acne and atopic dermatitis. It also protects the skin from various harmful effects due to solar radiation by acting as a free-radical scavenger.

The rich presence of vitamin K in Soya bean oil is also great for its effect on blood clotting. Additionally, it is important for regulating bone metabolism, as well as maintaining bone strength and reducing the risk of fractures. Vitamin K is necessary for the production of essential proteins (amino acids) which the body cannot produce by itself and therefore needs to be absorbed from meals. It is then used to produce specific proteins that are essential for maintaining bone mass, including osteocalcin. In fact, a single tablespoon (15 mL) of soybean oil gives you 25 mcg of vitamin K, supplying around 20% of the required Daily Value (DV) in a single serving.

When you buy Soya bean oil brands like Golden Terra Soya Oil, you are not only ensuring heart health, but giving your body the fuel it needs to fortify your bones, teeth, muscle, aid blood clotting, and improve your skin health. That means growing children and fully developed adults alike are better off using Soya bean oil in their daily diet for a healthier body. Whether you’re frying, cooking, baking, or roasting, the healthy option remains Soya bean oil.

Mama Francesca Edozie, a 67-year-old retiree in Lagos, switched to Soya bean oil some years ago and she has not looked back. “Life has been beautiful. I’ve felt healthier and my doctors remain amazed by the effect on me,” she said. “I no longer worry about standing for too long in church and I even enjoy all the things my children used to warn me against eating. They too have seen the light. All of us in my family, including my grandkids, use Soya bean oil. I advise anyone who hasn’t switched to Soya bean oil, particularly Golden Terra Soya Oil, to do so.”

Her son, Obinna, also recommended Soya bean oil, adding that Golden Terra Soya Oil was a game-changer. The civil servant confessed that his immediate family used to prepare their meals with Palm Olein every day until a year ago. As soon as he and his siblings started seeing the physical effect on their mother’s bone strength and radiant skin, he knew it was time to join her. “I too want to age healthy and gracefully,” he stated.

As the leading Soya bean oil in the Nigerian market with an increasing presence across the country, Golden Terra Soya Oil is the healthy and best option for cooking and baking your delicious meals. The 100% pure Soya oil is totally sourced and manufactured in Nigeria.

What they do not tell you about Soya bean oil was last modified: May 9th, 2022 by Reporter