Home News What went down at Felabration
News 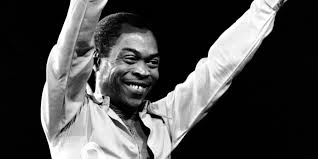 Felabration is an annual festival of music and arts remembering the life and times of Nigerian’s foremost musical icon, the late great Fela Anikulakpo Kuti. It is usually a 1week full of celebration, from musical performance, school debates, lectures, and art exhibitions.

The one-week-long event which is held annually at the New Afrika Shrine in Ikeja, attracts visitors from different countries and has thus been considered as an official tourist destination by the Lagos State Government. Felabration is held on the week of Fela’s birthday.

The event features musical performances from top music acts from Nigeria and guest appearances from internationally acclaimed musicians and personalities. It also consists of street parades, symposia on social and topical issues, debates and photo exhibitions.

The lecture was tagged teacher don’t teach me nonsense which took place at Neca hall in Ikeja  it had over 5 speakers, Prof Akin Oyebode, Chimamandab Adichie, Bobby wine form Uganda and Akala from United State, they all spoke briefly on Fela and all touched a lot of things. It was a morning that knowledge was shared to all, the hall was filled with people that want to learn more.

Tuesday, October 15, 2019 was day 2 of ‘Felabration,’ the week-long celebration of foremost Nigerian music legend, Fela Anikulapo-Kuti. The day was also Fela’s 81st posthumous birthday. A line-up which includes Maka, Yomi SARS, Orezi, Efe, Soft, Bella Shurmda, Lyta, Martinz fillz, chessy, oberz, FMG, Tzay,Okiemute and so forth was headlined by the African Giant himself, Burna Boy. He was dressed in baggy ankara prints and had a full smile everywhere he went. He entertained with some of his hit songs. Rapper Cdq was another artiste who came on stage to thrill his fans. His performance was one of a kind, he gave his best to his fans, Cdq is one celebrity with so much energy. Other celebrities also gave in their best to entertain the crowd.

The way at which people love Fela is mouthwatering. So many give up a lot of things to attend this event, the straight one week of celebration at shrine make different clubs lose their costumers because no one once to miss one bit of what is happening at the shrine, the only one place that illegal things are done, drink, smoke, and dance all you want without questioning. Both up and down is usually full to the brim with no space to rest your legs, most people that come late don’t make it inside as the is no space to contain more people but people still struggle to make their ways into the African shrine.

Wednesday 16th October was day 3 of Felabration, it had fuji icon Pasuma on stage as he acted wonders on stage, it was a night of grace as the icon gave it to his fans the real ways, his energy on stage was one of a kind his performance was one of a kind as he performed and also gave some hot Zakun leg work steps on stage. As he said that it was the least he could do to support the legendary Fela Kuti. It also had other artiste like Sean Tizzle, victor Ad Mc galaxy, Dammy Krane, Pampa, Spencer, Maginto and other hot stars. Maginto was another celebrity that created magic on stage, the northern brought both the northern spirit and blended it with the Lagos spirit and brought it out hot hot. He made sure the quest had a enough of him.

Lyta another new act that has the key to happiness

Lyta the ex YBNL big boy who is now signed to Doro music is still scoring big in his sector as he still giving his fans the best he can give them, he might look small but his energy is one that no one can bit. He is born with so much talent, the is no week that Lyta is not being called for performance, his grace is just one of a kind, fans were so happy when he stormed the stage, he sang 3 of his hits songs and fans wanted more form him.

Joeboy thrilled his fans as he performed his hit song baby

Not to think that Joeboy is a new act signed to Mr Eazi’s label, this boy is one of a kind, he is loved by everyone because of his song that has cut all the music lovers. When he stormed the stage and the crowd screamed like it was their first time to set their eyes on him. He did magic on stage with his two hit songs and his fans wanted more of him.

This two didn’t perform together but the performance came after each other. Praiz Cmae online and did magic to the Mic while Chinko came on stage and the crowd was wow because of his hit song able God, able God is one song that all type of fans can communicate with, once this song is played anywhere be rest assured to shake your body, they is no two ways about it you just have to give up the home training as that was exactly what happened at shrine.

Olufela Olufemi Anikulapo Kuti, popularly known as Femi Kuti, is a Nigerian musician born in London and raised in Lagos. He is the eldest son of Afrobeat pioneer Fela Kuti and a grandchild of political campaigner, women’s rights activist and traditional aristocrat Funmilayo Ransome Kuti. He came through to support his late father as he thrilled his fans at the different Felabration days. It was no dull moment with the legend. Femi Kuti began his musical career playing in his father’s band, Egypt 80. In 1986, Femi started his own band, Positive Force, establishing himself as an artist independent of his father’s massive legacy.

Oluseun Anikulapo Kuti (born 11 January 1983) better known as Seun Kuti, is a Nigerian musician, singer and the youngest son of famous afrobeat pioneer Fela Kuti. Seun leads his father’s former band in Egypt. Seun is another hot stuff who gave the crowd hot hot with his wonderful performance and energy.

Alhaji Musliu storms the crowd with his performance

Even though Alhaji is an Apala artiste and has no connection with Fela he still put it together to thrill fans, his energy is just mouthwatering, the crowd didn’t believe he could do all he did on stage, it was no boring performance at all. His crowd was really amazed

Fela as we all know is still the biggest with a huge fan base even in death. The rate at which he is celebrated, so many artiste traveled down to celebrate the length.it was week of love and happiness, the joy on their faces when they came on stage to perform is one that can’t be bought because it was real. This people come in year in year out just to celebrate a length.

What went down at Felabration was last modified: October 19th, 2019 by Reporter

Just In: Three Dead In Auto Accident Along Lagos-Badagry Expressway

How The Ooni of Ife Dazzled Everyone...