Home News When Oladimeji Got Married To Olukemi In Grand Style in Lagos.
News

When Oladimeji Got Married To Olukemi In Grand Style in Lagos. 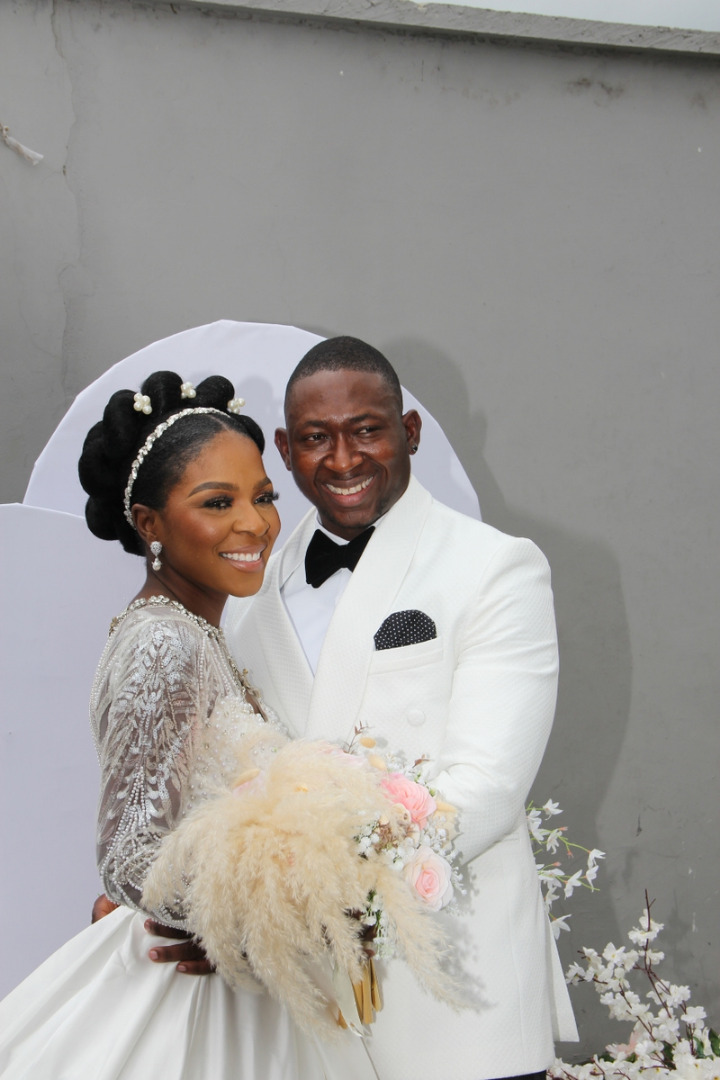 On Thrusday 4th August 2022, the families of Dr Oludotun Akinde and Mrs Kudirat Yusuf Adeniji and that of Alhaji Ganiu & Mrs Aderonke Awoyemi,became one family, as they gathered friends and family to The Grandeur Events Centre,on Billingsway Oregun Lagos, to witness the joining of their handsome son, Oladimeji and pretty daughter, Olukemi.

The Grandeur event center located in Oregun,Lagos, was a beehive of activity because of the grand event. The 5,000 sitting capacity was skillfully set by Brainy Beams. The stage was a sight to become as no set was left out. It had comfortable Groom and Bride set up with a glass table graced with beautiful flowers. The backdrop had the names of the couple inscribed in Gold. It was a mix of traditional and western style. The cakes were also set on the stage place on the most beautiful crystal like tables. It really was a sight to behold. The walk way also had a beautifully set demarcation that was lavishly beautified with props and flowers. The hall had the best lighting you can imagine. The chivalry chairs were set in tens and the round table covered in white cover cloth. A stage was set at the heart of the hall with large speakers and microphones. The ambience was a flavoured ‘owambe’ feeling.

For the church service, the bride stepped out in a well detailed wedding dress, accompanied with friends, dressed in a peach evening dress. The Groom also dressed up in a white suit with black pants, as his friends accompanied him in an all black jacket and pant.

For the Engagement ceremony, both bride and groom were dressed in a blue shiny aso oke material with matching cap and gele.

The event was shut down by various popular faces in the society and royalties. Some of this dignitaries were Mr Remi Awode, the Chairman of Chemstar Group, makers of Fine Coat paint, Chief Ogunmola, Otunba Olumide Akinde,Mr Kunle Shadare, Alhaja Raliat Adunni, Abudullahi Titilayo and many others.
In honour of the new couple HRM Oba Adulfatai Akorede Akamo,the Olutori of Itrori graced the event, with his presence, in the company of his beautiful Olori and some chiefs.

The Engagement wedding started with a few songs from Alaga Ijoko, Fere Jesu. As she sang,she approached the parent of the bride Dr Oladotun Akinde and Mrs Kudirat Adeniji. After a few songs in yoruba dialect, the Akinde family danced to their seats awaiting the arrival of groom’s family.

Soon, the Alaga Iduro announced the presence of the groom’s parent, Alhaji Ganiu and Mrs Aderonke Awoyemi , as they danced through many stages as requested by the Alaga Iduro and Ijoko.
Once in the presence of the bride’s family, the groom’s family were again indulged in series of traditional processes which included greeting in traditional dialects, prayers and familiarisation. After this the groom’s parents and family were ushered to their seat.

After the groom,Oladimeji Suleiman Awoyemi danced in, with his friends also going through the stages required dancing and smiling.
After a few photographs, the bride made her grand entrance.

Olukemi made her entrance in a grand style. She had Dj Format play some hip hop songs as the bride and her friends danced in.
Soon, the Alaga Ijoko took over and helped Olukemi through all the traditional stages before presenting her to her husband. This marked the end of the engagement party.

As soon as guests began to fill the hall and await the presence of the groom and his bride, a troop of dancers ran through the hall. They were children of ages 7 to 15 dressed in a cultural outfits. They had their head graced with beautiful traditional beads, blue striped aso oke on their waist and yellow blouse. The song was loudly in Ondo dialect,and this let off dance moves with alot of energy and vibes.

At the wedding,King Sunny Ade was the top attraction of the night.
At the close of the engagement party, the Alaga Ijoko in person of Alaga Fere Jesu announced the grand entry of the King of World beats,King Sunny Ade. He immediately took to the stage to praise all royalties and dignitaries present, he then danced with the couple. He was on top of his game, as he dished out,one after the other,lovely tunes and all the society women were on their feet dancing to KSA till late at night.

Many guests left the wedding feeling happy.Indeed,they had a nice time,as they had a lot to eat and drink.

Popular Events planner,,Bimbo Durojaiye was on her feet throughout,making sure everyone was OK.She is the bride’s auntie and she was the one who packaged the event.

When Oladimeji Got Married To Olukemi In Grand Style in Lagos. was last modified: August 7th, 2022 by Reporter

CBA FOUNDATION TAKES INTERVENTION AMONG UNDERPRIVILEGED WIDOWS TO THE NEXT LEVEL, WITH THEIR SOCIAL ENTERPRISE INITIATIVE