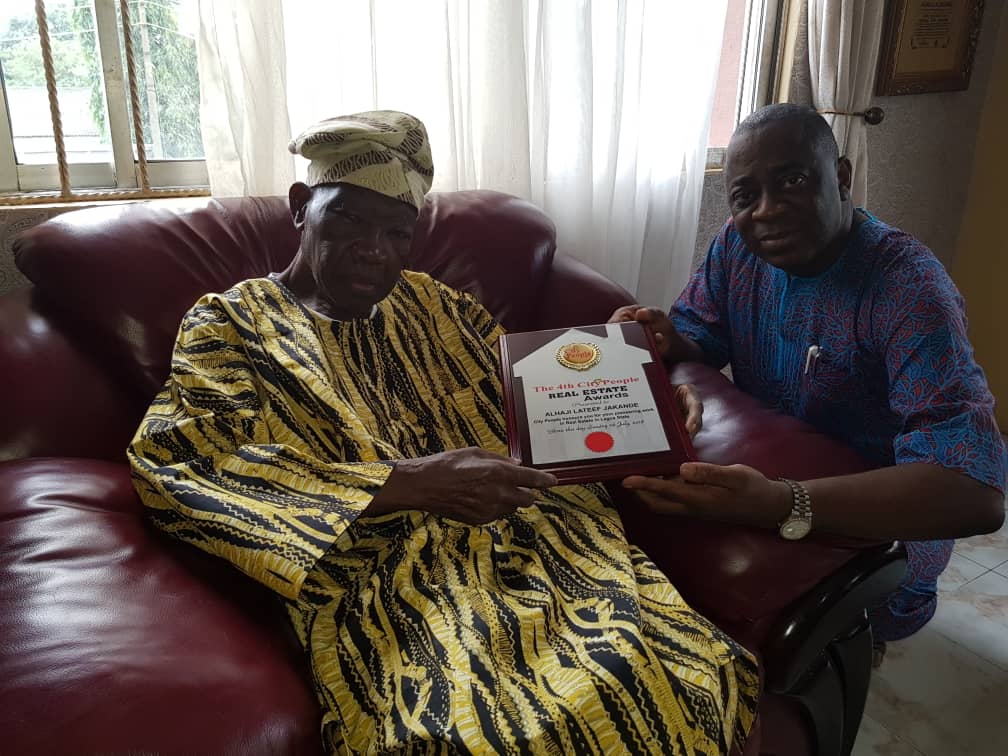 When he was the Governor of Lagos State, he had an unusual life style. Alhaji Lateef Kayode Jakande, the former governor of Lagos exhibited a modest lifestyle. For instance, he rode in his personal Toyota Camry Sedan car and he operated from his personal house at Ilupeju. His lifestyle was so ordinary.

Now, that he has been out of office since 1983, nothing has changed about Alhaji Lateef Kayode Jakande, who was the first Civilian Governor of Lagos State (1979 to 1983) and then went on to be Minister of Works and Housing (1993 to 1995).

Last week, City People spent time with the man Lagosians called LKJ because of his immense popularity then and we were shocked that LKJ’s life-style has not changed one bit. He is 89, still strong and fit, although age has mellowed him, but what has remained constant is his simplicity. For instance, he still drives his Toyota Camry (not a jeep) and his lifestyle at home is still very ordinary.

All his aides revealed that Papa is simple to the core. There are no airs around him. He is not interested in all the trappings of office. Not for him the attraction of living in Lekki or Banana Island. He also does not lobby for contracts from his successors in government. According to an insider, if Papa Jakande wanted to live in all these highbrow areas in Lagos he would have moved there decades ago, after all, he created many of the estates when he was governor.

What has probably changed a bit is age, which has mellowed him greatly. But let’s quickly tell you that Papa has not slowed down one bit. As at the time (11am), we arrived his Ilupeju residence, Papa had been writing for hours, don’t forget, he is a Journalist of repute. As at that time, he had not eaten his breakfast, which his amiable wife had prepared. She his 70 and she is used to the ways of Papa. She will readily tell you that Papa enjoys writing a lot.

Alhaji Lateef Jakande lives a life all those in the corridor of power should emulate in terms of simplicity. There are no police detachments or an army contigent on guard to watch over him. All he has are some loyal aides, who have been with him since the 70’s

For those who don’t know  Alhaji Lateef Kayode Jakande well, let’s tell you a bit more about this veteran journalist turned politician. Born 23 July 1929  he was a journalist, who became Governor of Lagos State at Nigeria from 1979 to 1983, and was later Minister of Works under the Sani Abacha military regime (1993–98).

Lateef Kayode Jakande was born in the Epetedo area of Lagos State. Both parents are from Omun Aran Kwara State. He studied at the Lagos Public School at Enu-Owa, Lagos Island, then at Bunham Memorial Methodist School, Port Harcourt (1934–43). He studied briefly at King’s College, Lagos in 1943, and then enrolled at Ilesha Grammar School in 1945, where he edited a literary paper called The Quarterly Mirror.

In 1949, Jakande began a career in Journalism first with the Daily Service and then in 1953, joined the Nigerian Tribune. In 1956 he was appointed Editor-In-Chief of the Tribune by the owner, the late Chief Obafemi Awolowo. His editorials were factual and forthright, and were treated by the colonial powers with respect. After leaving the Tribune in 1975, Jakande established John West Publications and began to publish The Lagos News. He served as the first President of the Newspaper Proprietors Association of Nigeria (NPAN).

Encouraged by Awolowo, he ran for election as executive governor of Lagos State in 1979, on the Unity Party of Nigeria platform. He defeated his opponents, the late Chief Adeniran Ogunsanya of the Nigerian People’s Party (NPP) and Sultan Ladega Adeniji Adele of the National Party of Nigeria (NPN) and was subsequently sworn in as governor. His administration was effective and open and implemented the cardinal policies of his party. He introduced housing and educational programmes,   targeting the poor, building new neighbourhood primary and secondary schools and providing free primary and secondary education.

He established the Lagos State University. Jakande’s government constructed over 30,000 housing units. The schools and housing units were built cheaply, but were of great value. Some of the housing units include low cost estates in Amuwo-Odofin, Ijaiye, Dolphin, Oke-Afa, Ije, Abesan, Iponri, Ipaja, Abule Nla, Epe, Anikantamo, Surulere, Iba, Ikorodu, Badagry. To fund some of the projects, Jakande increased the tenement rates and price of plots of land in affluent areas of Victoria Island and Lekki Peninsula and the processing fees for lottery, pools and gaming licences.

He also completed the construction of the General Hospital at Gbagada and in Ikorodu and built about 20 health centres within the state. As a governor, he established 23 local government councils which were later disbanded by the military. He also started a metroline project to facilitate mass transit. The project was halted and his tenure as Governor ended when the military seized power on 31 December, 1983.

After the military take-over in 1983, Jakande was detained, released although later he was pardoned.  After being freed, he accepted the position of Minister of Works under the Sani Abacha military regime, which earned him some criticism. He claimed that he had accepted the post under pressure from M. K. O. Abiola and other progressive leaders. In a later interview, he said he had no regrets about the decision to serve.  However, his association with Abacha handicapped his career in politics after the restoration of democracy in 1999.

Alhaji Lateef Kayode Jakande became a senior member of All Nigeria Peoples Party (ANPP) when the UNPP and APP merged. In June 2002, he was “suspended” by a faction of the ANPP loyal to Chief Lanre Razaq. Jakande was the first Chairman of the Action Party of Nigeria (APN) when it was formed in November 2006. In May 2009, he was reported to be engaged in a struggle for control of the party with his former ally, Dr. Adegbola Dominic.

From October 1979 to December 1983, his government achieved a lot.  For instance.

Why Alhaji JAKANDE’s Lifestyle Has Not Changed One Bit was last modified: July 16th, 2018 by Seye Kehinde