Home Flashback Why AYINLA OMOWURA & Barrister Didn’t Get Along
Flashback

Why AYINLA OMOWURA & Barrister Didn’t Get Along 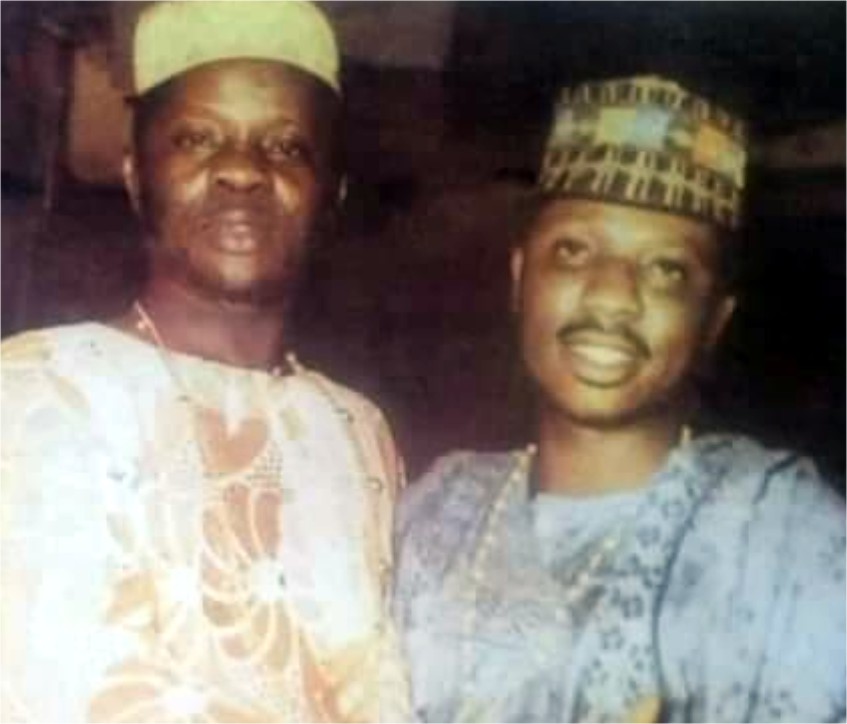 Ayinla Omowura and Ayinde Barrister from what was gathered were good friends. According to Omowura’s nephew, Abayomi Atanda, a senior teacher at Abeokuta Grammar School, whenever Barrister saw Alhaji Ayinla’s vehicle parked on the street, he would come and meet him, because they lived in the same neighbourhood at Mushin. Also, if Barrister had a musical outing in Abeokuta, he would come to our Itoko house. I used to fetch water for them, including Kollington’, Atanda revealed.

An impeccable source disclosed that Barrister emerged the Captain of Ayinla Omowura Fans Club in a keenly contested election. But what could have resulted in the rift between these two gladiators?

According to Chief Jacob Adelolu(Amuludun), an Omo Adio – based hotelier and Ayinla’s ally: ’Omowura told me that he went to Barrister’s house in Lagos to invite him for a gig at his son’s christening. On his arrival, Barrister’s aides requested that he fills a visitor’s form, which Ayinla considered as an affront. To worsen the matter, Barrister peep from the window and said ‘Alhaji e ma follow protocol ni’. A furious Omowura left in annoyance and headed to Haruna Ishola’s residence in Ijebu Igbo as a replacement for Barrister’, the septuagenarian Amuludun revealed.

Alhaji Haruna Ishola eventually was on the bandstand at the naming ceremony held in July 1979. It was reported that the event was carnival-like. Omowura praised the ceremony to the high heaven in his album ‘Eyin Oselu Wa’(vol. 16), released to herald the second republic. He sang: ‘ Haji Ayinla lo k’omo ninu osu July, Ishola Haruna lo wa sere fun’. Unfortunately, the boy named Muyideen was borne for him by a police officer, Corporal Oluwakemi died in infancy. Despite the fact that Barrister was not on the bandstand, I believe that the Fuji Lord may have contributed to the event by other means; otherwise, a typical Omowura wouldn’t have mentioned his name while appreciating those that graced the occasion. ‘Alhaji Sikiru Barrister Captain wa, l’ojo ikomo itu pa l’oja ni’toko’.

Another reliable source who was close to the Fuji creator disclosed that the Ayinla-Ayinde feud can be attributed to envy and jealousy. He said since 1974 when Barrister held some of Omowura’s fans to a spellbound with his superlative performance at Ayinla’s child naming ceremony, the Apala prodigy had seen Barrister as a threat to him. Omowura known for his domineering tendencies had been trying to suppress the Fuji genre and his creator. He wouldn’t tolerate any musician that could dwarf his popularity. Truly, with Ayinde’s innovation, Fuji as an emerging brand with attributes of other genres of music was gaining more acceptability than Apala. In fact one of Omowura’s band boys, Kemuye Ramoni veered to Fuji music.

Following Ayinla’s tragic death, his embittered fans accused Barrister of conspiracy in his murder. Ayinla’s lead talking drummer, Baba Adewole Oniluola would have suffered the same fate, but his tiff with Omowura was resolved barely a year before Ayinla’s death. ‘if I had rejected the pleas to settle the rift, perhaps, the angry mob would have killed me too’, 95-year-old Adewole submitted.

Ayinde’s tribute in his ‘Aiye’(1980)is still one of the best done to memorialise Ayinla. The elegy was superb as he dedicated the whole flip side of the vinyl to the slain Apala legend. It’s noteworthy that Ayinde was on the musical tour to Northern Nigeria when Ayinla was killed.

Ayinla Omowura was born in 1933 at Itoko Area of Abeokuta to the family of Yusufu Anigilaje and Wuramotu, Waidi Ayinla was killed by a mug smashed on his head by his estranged band manager, Fatai Bayewumi on Tuesday, May 6, 1980. He was survived by his aged mother, Wuramotu(who later died in 1992), siblings, wives and children. Dr. Sikiru Ayinde Barrister was born in 1948 and breathed his last on December 16, 2010. He was survived by wives, children and grandchildren.

Why AYINLA OMOWURA & Barrister Didn’t Get Along was last modified: March 2nd, 2022 by City People

Why I Accepted To Be The New Oba Of IJEBU IGBO