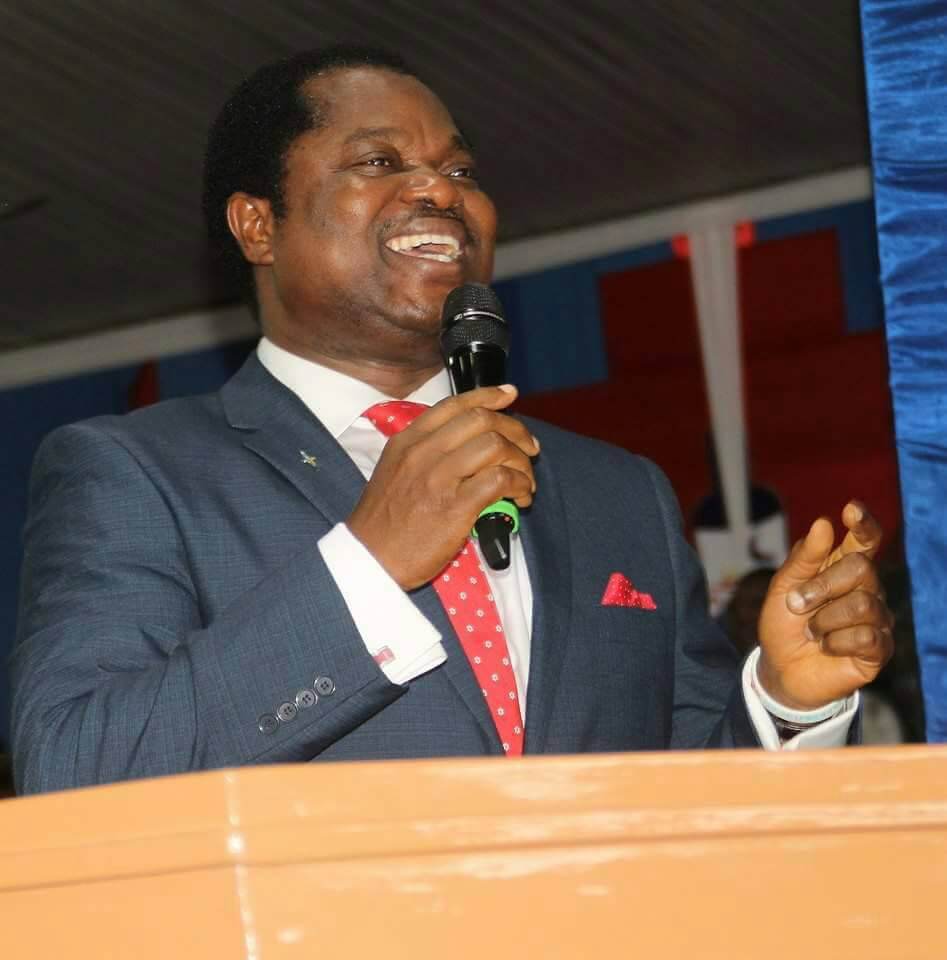 Must every Christian pay Tithe? That has been one controversial issue amongst Christians and it has been one big debate. What does CLAM Snr. Pastor, Wole Oladiyun think about the issue? How does he see the debate? Last week, City People Publisher, SEYE KEHINDE and Assistant Editor, SUNDAY ADIGUN spoke to Pastor Oladiyun about it. And he told us matter-of-factly: All Christians must pay Tithe! He also advised all Christians to adopt the principle of GIVING.

Below are excerpts of his views. It is very educative.

Over the last few months many Pastors have come under close scrutiny and attack from those outside the church. What is your take on various criticisms pastors have been subjected to?

The Bible says the prince of this world comes and finds nothing in me. The Bible equally said: “He who stands must beware, so that he does not fall”. The criticisms are both positive and negative. There are norms that we must conform to as Christian leaders. Once we deviate from those norms, we must be checked. The criticisms, in a way are checks, and they are welcome. We are in a position of leadership and we must be responsible.

There are 3 major things I emphasise to Christian leaders. One, that God has put us in the ministry, we have not put ourselves there and it’s a great opportunity. So, the first thing is God has given us an opportunity. When a man is given an Opportunity, the onus now lies on the man to be responsible and be accountable.

So, those two things must be adhered to. We must be responsible for the opportunity to be in ministry and we must be accountable. When responsibility is shirked, then there must be deterrent measures. When we are not accountable then we must be pummeled.

The public, singularly speaking can raise voices against us, and then we must check ourselves. You can’t rule it out that people are saying what they don’t know because we are human beings. We have the episcopal grace. But we must use the grace to better of the people. Some pastors are not called, they called themselves.

You can imagine abominable things happening in Christendom. It gives us concerns, those of us who are really standing right by the grace of God. How can you imagine pastors patronising dark practitioners, people in the occult world? It’s not right.

How can you imagine pastors using the inflowing to the ministry for frivolous things, instead of using the resources to build humanity, to build a better life for people, to build legacies that our children will see tomorrow and congratulate When you see pastors living lifestyle, it shouldn’t be so.

These days, you see pastors sleeping with women in church and young ones doing abominable things or saying things they don’t do. It’s not right. That is not being responsible, that is not being accountable. When those things are happening, the Holy Spirit goes away from such ministers, and then they will now look for other means to help themselves up.

So, when we are criticized in those areas, those criticisms are welcomed, so that we can change. So that we can conform to the norms of our Lord Jesus Christ. Many General overseers, who are doing evil these days don’t have eternity in mind. But I must say some criticisms in some areas are purgatory.

They are not positive, like people criticizing Giving, Tithing and first fruit. Those are biblical norms nobody can work against. You can criticize those who are not using the resources right. For instance, every income in CLAM for the past 21years is well accounted for, I have the records. And you can see the visible things we are doing with the income.

By the grace of God, if you check in Nigeria today, CLAM has one of the leading medical facilities, caring for people with minimal charges. We just take charges that can make us to pay the staffers. For example, we did the 4th brain surgery a few weeks ago.

Each brain surgery will cost 8 million in India, but here we did each one successfully for 900k. Here in CLAM Soteria Maternity, we’ve done hip replacement and so many surgeries successfully. Now we just concluded one-month free medical checkup for women with our Mammogram machine.

Last year alone, 2 to 3 mad persons gave birth to children by the and they were brought here. We took care of them and handed them over to the Lagos medical welfare successfully. When we see people who could not afford their bills we let them go.

We are doing things right here. Our farms alone will be able to take 7,000 to 10,000 youths off the street. How about using money coming in to CLAM to set up an acquisition scheme, vocational center? Miscreants are being brought in here to be trained. People from other faith are coming here to be trained. We award scholarships. We are training a lady who will become a Pilot in 3 months’ time, in Philippine.

We are training people in primary school, secondary school University. Even the Muslim community here benefited from our scholarship awards. We are taking care of them. We live together in peace with our . That is Christianity as defined by Jesus. When ministers veer off, we must be checked, they must be checked.

The money that built the Soteria Hospital could have been deposited to wet lease a plane, but I have not done that. There is nothing bad in using a Jet. Let me balance it and let the whole world hear. I am a crusader; I go to villages that pastors don’t go. I have been to several countries, states, towns and villages.

Sometimes I would be tired in the car and feel like having a helicopter, to bring me out of those villages and hamlets immediately I finish. If anybody gives me, a helicopter, I will collect it, use it, and nobody must shout because I have paid my dues. So, for those of us, who have paid our dues, we deserve a major comfort.

What is your take on the issue of Titthe?

Payment of Tithes is a spiritual thing; it cannot be analyzed with our gumption. These are biblical norms that must not be faulted by anyone. No one is compelled to give; we explain the principle to the people, the onus now lies on you to activate the principles. It is as simple as that.

When you give your Tithe, you chase away devourers from your finances. Even the Muslims give Zakat. They believe Zakat is a matter of must for them. Those who are not born again, they are neither a Muslim nor Christian, yet they Give and receive, Law of nature, Law of nemesis, Law retribution. What you give will activate receiving from the supernatural; I’m talking on the mundane level.

Every Giver is an Achiever, even those who don’t know God, once you give you receive. It’s a natural principle that God has instituted. So, in our faith by the grace of God, Tithing, Giving of Offering and first fruit is very important. When the money flows into the church, they must be multiplied. They must be well used. When it’s not well used, then criticism comes in.

What is the correlation between the Old and New Testaments on the issue of Tithing, because that has been the argument over the years?

When people are bringing issues up, I’ll want us to discuss holistically. The bible is just one book. Everything in the Old Testament is the shadow of the New Testament.

When you are talking of Tithing, are they saying we don’t have Tithe issues in the New Testament? When you look at Hebrew 7 for example you will see everything there.

The Leviticus priest had paid Tithe in Abraham’s time. Abraham was the great grandfather, followed by Isaac, Jacob then Levi. The Levi was the 4th generation. When Abraham had an encounter with Melchizedek, there was an exchange. He paid Tithe.

He said this has paid tithe in Abraham. I don’t like complication. That simply means through the blood, genetically has done that, though he wasn’t born then. We are the modern day priest.

So, the priesthood is there and there is nothing anybody can do about that. If you say ‘tithe should not come to church; we should not follow the principles of God? We would deny many people of their benefits? You want me to go back and be engineering and give myself fully to this work; If I do that you won’t meet CLAM like this.

When you are talking of Giving, Giving runs through. When you are Tithing, you are Giving the 10% of your earnings to activate the blessing and promises of God. Giving is an act. Some people don’t even give physical money, but they give their services. Some people intercede, they give in intercession. So, Giving is multi-dimensional. It’s the principle of God; it’s the principle of the kingdom. Giving must not be compromised.

As a rational human being, what you sow, you reap. It works for everyone irrespective of your faith bias. There is something very unscientific about Giving just like the Anointing. The first Submarine made by God was the fish that swallowed Jonah.

He was in the belly of a fish for 3 days, God suspended the digestive system of that fish, Jonah was not digested, and the fish vomited him on the 3rd day. That was not scientific. So, this principle is beyond Science. It’s beyond rational analysis.

Take for instance. Jesus met with the disciples and the asked them to pay tax. Jesus asked Peter to go to the sea with his hook, the first fish that comes, he should pick it, open it and bring the money in it. Can science rationalize that?

So, it’s the same thing with Giving. Also, the wife of one of the prophets went to Elisha, she said to him, “Your servant, when he was alive owed, though he was a good man, now the creditors have come to take the two sons, what shall I do”?

Elisha asked if she has anything in the house, she said ‘nothing but a little measure of oil and Elisha said, go and borrow vessels, lock the door, get the oil and start pouring it inside the vessels, and the little oil filled so many vessels. Can science rationalize that? So, you can’t rationalize the principle of Tithing, first fruit Giving. There is something that is beyond common sense about the principle of God.