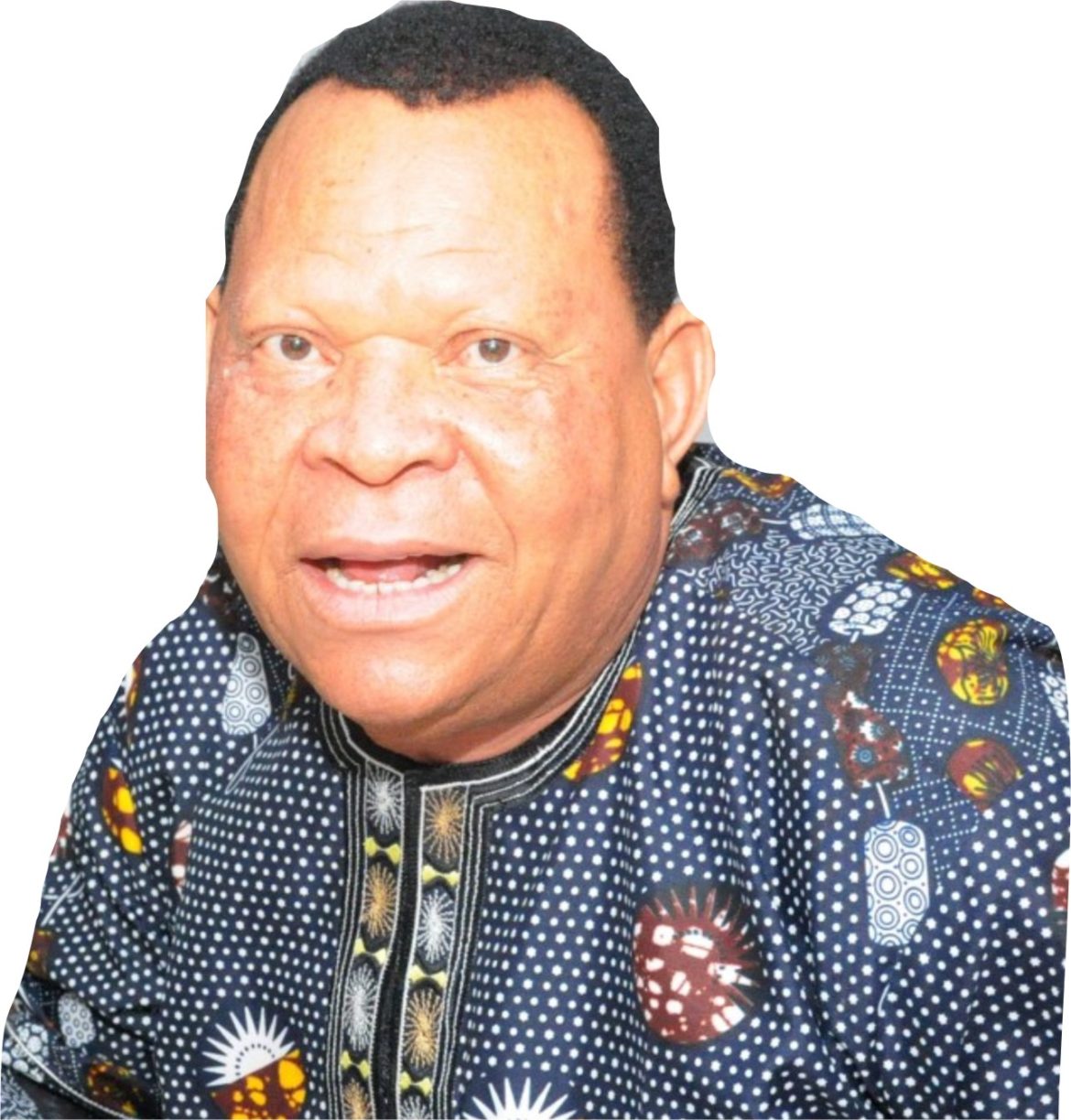 The new President of ANTP, Adewale Elesho is a veteran actor, who is witty and humorous to be with. Not only is he a veteran, he learnt the rudiments of the trade in the Yoruba movie industry under the tutelage of the late Movie icon, Chief Hubert Ogunde in his Ososa home town near Ijebu-Ode.

Last week, Elesho was Guest at our weekly Movie Round Table session at City People, for movie stars. And for 2 hours, he kept spicing his answers with rib-cracking jokes that left all of us in stitches. He revealed that there are moves being made to reconcile the 2 leading Yoruba movie groups ANTP & TAMPAN. He promised that with the great plans he has for the ANTP, which was set up by late Baba Ogunde, the group will become stronger than he met it. He revealed why he is not happy with fellow veteran actor, Prince Jide Kosoko. He said matter-of-factly that he likes the current TAMPAN President, Mr. Latin and he would be collaborating with him to restore all the lost glory in the Theatre industry.

Now that you are the new President, what are the plans you have to run the Association, and how do you plan to re-unite theatre practitioners?

That I’m the President of the Association of Theatre Practitioners (ANTP) has never freaked me, for once. What I’m particular about is how this Association will not go into extinction. You can decide to change your name, but you cannot change your father’s name. I’m Adewale Adeoye Elesho, if I like I can change it to Francis, but I must not remove Adeoye when I don’t have another father. I must always add Elesho to my name. Whatever we say and talk that’s what I will tell all the Elders that appointed me as the President of ANTP. In fact, I will support Mr. Latin to move on, that is if Latin is ready to accept ANTP  and he will accept that it is this same ANTP that gave him the fame.

It is this ANTP that gave some of our prominent bosses the fame they are enjoying till date.

So, we will be an ingrate if we forget this Association and some of these Elders. It doesn’t freak me that I’m the president. Before the issue of Don’t invite them for work and all that started, we were not wretched and we were not hungry. I don’t have many children, but the ones I have are graduates. So till date we are okay; it doesn’t affect us a bit. If you are doing something, and you know what you are doing is good, and you are truthful with it, forget it, you will never be scared of anything.

Mr. Latin, the President of TAMPAN is a good man, a very responsible man. He is from Osun. I’m also from Osun too.  So we are from the State of Omoluabi (laughs).

When this whole issue started, I refused to leave ANTP and I told them the reasons. I told them my connection with Ogunde and I must not disappoint him. He was my father and I will never forget that. He gave us what we are enjoying till date. As troubled as Nigeria is, it has never changed from been a Nigeria.

This one is fighting to be the President. The other one is fighting to be the Governor, Senator, Chairman et.c yet it doesn’t change the name of the country. Nigeria still remains Nigeria let alone our Association that the population is not even up to anything. We are under one umbrella, so what is now the problem? It will be good if we can go back to the drawing board. So, being a President doesn’t freak me at all. All these elders too wanted us to settle the rift and come back, but in a situation where you have many people that their heart is not okay with you, you have to be careful. There are many of them who want Latin to leave there tomorrow so that their children can be there as the president, not knowing that life is not like that.

What were the moves that actually made ANTP split?

To tell you the fact, I’m so sure Oga Bello will say that I’m saying the truth. Jide Kosoko is the brain behind what is happening in the Association that led to the break up. Jide Kosoko started the whole problem. That is how I see it. Ashaolu was going for President. Dele Odule too showed interest. On a more serious note, Dele has been nursing the ambition of becoming the president for long.

When we had Jimoh Aliu as the President, he contested. Oga Bello stepped down for Oga Jimoh Aliu. Dele accepted to deputise for Jimoh Aliu and he became the deputy president, so since then he’s been nursing the ambition to become the president. But what many people don’t understand is that life is turn by turn. To be in that position is not easy. Uncle Jide was financing Ashaolu.  He would call him to his house in command, he will also call Dele. As he was appointing committee for Dele, he’s appointing another committee for Ashaolu. At the end of the day, the whole thing boomeranged, and the Association was suffering it.

Everything was destabilised. Some of our Ogas now rose up that this cannot continue like that. Baba Eda, Oga Bello, Oga Jimoh Aliu, Mama Awero etc, they summoned Ashaolu and Dele Odule. They did not tell me. I was there live at Floreb Hotel in Ibadan. They prayed for them and they called them separately. That, “Ashaolu, this is the board of trustees and we are the owner of ANTP, and we don’t want the Association to scatter. We are the ones to vote; 7 of us. Whoever we appoint after voting will become the President of ANTP, do you agree?” Ashaolu said Yes. They told Dele Odule the same thing and he also said  “Yes”. We were not part of the committee. We were like Observers there, myself, Olaiya Igwe from Egba, Ogun Majek and many others.

All the Board of trustees prayed for them and they asked them this same question again and they said They would agree with the trustees decision. They voted and the result has 5-2. Ahaolu got 5, while Dele Odule was 2.

Ashaolu stood up and all the Board of trustees stood up and they prayed. Lo and behold, it was from there they called Dele on phone that he must not concede defeat.  They said he must not agree; that Ashaolu, was not a star, that he doesn’t have any knowledge about theatre. They forgot that, truly Ashaolu was not a star but he was once the Secretary of the Association. When Dele was the Deputy President, Ashaolu was the Secretary and atimes, Secretary is more powerful than deputy. We tried all our best to settle it amicably, but it didn’t work. and Ashaolu went to court, claiming that it was cheating. That was the Genesis of the whole saga.

They all believed that Ashaolu was not popular. They believed he could not rule them. Some factions left. Because it’s not possible for me to know the number of other family’s children, I can only say my own (laughs). But that’s the genesis of the whole story. It later escalates to the extent that Ashaolu took us to court and won. The court ruled that Ashaolu was president.

Yes, they disagreed. So, that was how we were running until we got there and I called Ashaolu, that as you can see, I didn’t leave this Association because I’m late Ogunde’s loyalist and other top bosses. I am not a baby in this Association and  I told him enough is enough and we advised him to step down and he agreed with us.

And till tomorrow, I, Ademola Elesho, the new President of ANTP, I recognize Ashaolu as my former President, because it was what the board of trustees said that day he followed.  And they asked the two parties and they agreed. You can ask all the elders, they didn’t tell me I was their, before they destabilized everything and cause all the rancor.

Many of the Executives of TAMPAN don’t know Baba Ogunde, one on one. They’ve never been to his location. Some of them will only hear information about Baba Duro Ladipo. They didn’t know him. That’s just it.

How did your love for acting start?

It started from my primary school. I’ve really suffered in this theatre. When I was in primary school, We always acted from the bible then. We were asked to do the story of the Prodigal son, who bastardised his inheritance and later became a beggar, and later worked with a man that has poultry farm. They asked me to be the son, but I refused because I know my position in our family. My elder brother said they didn’t ask me to become a prodigal; they only asked me to act, but I refused because my father was the head of over 8 communities that time for 38 years. And whenever we were acting most of them always come to watch. So if my father is seated and I’m acting as a slave, he would not like it. Then, they now created another play,  “Adam & Eve” and I acted as God who reprimanded Adam & Eve. When my daddy heard my voice when I shouted Adam, he was more than happy. I said God saved me. So, since then I fell in love with acting. There are so many things that I love too.

I was one of the best footballers when I was in school as well, but my father did not allow me because of my complexion.

Most of your roles in the movies you always abuse people, who created them?

Tell me who did not abuse me that I abused or who did not curse me that I cursed? (Laughs) Like this interview now, I was telling you my mind, and if anybody now tackles me tomorrow, I will also tackle the person. It’s tit for tat.

Let me put it this way. How did you carve out the comedy part of you, so much so that even before you talk people are already laughing?

That one is God. There is nothing you can do without the knowledge of God. Though I can talk and I will say I got that from my father, he was an Orator per excellence. I believe I got that from him. One of my sons, Yemi Elesho is also on skit too. I asked him to study medicine in Ife only for us to see him in one drama hall in Ife. I said , “Yemi Gun be re gun  bere la ni ko lo se, ohun l’adehun wa” (laughs) he said he’s not interested in Medicine, and I agreed with him.

How I Lost All I Had To Sickness 3 Yrs Ago – Veteran Yoruba Actress, IYABO OKO