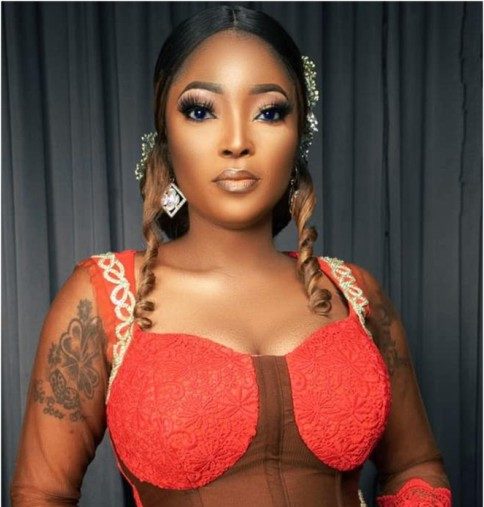 The beautiful Habibat Jinad is a fast-rising Yoruba actress, producer and television presenter. She began her acting career in 2007, joined widely filmmaker, Afeez Abiodun popularly known as “Owo” group in 2008.

After learning the rope and acquiring knowledge, she graduated in 2010 and ever since has been featuring in movies back to back.

She became popular in 2010, after featuring in a movie entitled: “Omokomo” and she is fondly called “Omojinad” by fans and colleagues in the industry.

She has been able to create a niche for herself in the industry. Besides her skills, she is a very humble, friendly and down-to-earth actress who also enjoys keeping her private life off social media, as she prefers to maintain a scandal-free career unlike most of her contemporaries in the industry.

In this interview with City People Magazine, at this year’s movie award, she explains why she encouraged her son to join the movie industry and why it took her 15 years to fall in love again, and her plans to settle down for the second time. Below are excerpts.

How do you feel about receiving this award?

Can you tell us what you have been doing lately?

I have been shuttling from one location to another. I thank God for everything. He has been indeed faithful. I have been working back to back. And please watch out for my next movie, Ireti Alaje. By the special grace of God, it will out in December.

How has the journey been, can you share the good, the bad and the ugly experience with us?

In every industry, there’s always an up and down, things can never be perfect. All you need to do is to keep believing in yourself and keep pushing forward and everything will be fine.

How have you been able to remain on the top of your career for over a decade?

God has been and will always be my strength, because honestly, it is not easy being a single mother, an actress, producer and entrepreneur, so God is my strength.

What made you encourage your child to go into acting?

Honestly, at the beginning, he didn’t like acting. His dream was to be a footballer. One particular day, a friend walked up to me and said, he would like my son to play a role alongside a star actress, Adunni Ade. So, I called him and said Joshua Sesan Alabi wanted you to be on a set, but he said ‘no’. A few days later, he said he was ready and we went through the scripts together. A day to the location, he said he was not doing again, I was like angered, after all the rehearsal. I had to do a lot of talking and counselling, I even brought home a cain to scare him and that was how his journey started.

Today, he has 3 awards to his credit, both in Nigeria and abroad and I am really super proud of him.

How long has he been in the industry?

He started in December 2017 and still counting.

Did you at any point see that trait in him of becoming a great actor?

Yes, I did, there was a particular day at home, he was mimicking star actor, Ibrahim Chatta, and I was really impressed. A few years later, he got an opportunity to showcase his talent.

How challenging has it been for you as a single mum?

Hmmm! that is another story entirely. It has not been easy, but with God by my side, everything has been going on well.

How has it been for you as a producer, as many Yoruba producers don’t make profits from film production lately?

I have a strong passion for my career. I have always wanted to be a producer and a successful actress. And once I make little money from my personal business, I divert it into producing movies. The truth of the matter is that there is money in movie production. The problem is that a lot of producers complaining are the ones who want to make huge profits from movie production.

It is actually a gradual process, but most people are not patient. Take, for example, see Funke Akindele’s today, she is making huge money from movie production. She started small, but if she had not continued putting more effort, she wouldn’t have become one of the biggest film producers in Nigeria today.

Everybody is in a hurry, they don’t have the patience to do things bit by bit. That is the major problem. They want to make millions immediately forgetting the fact that you need to start small.

Do you deliberately keep your private life off social media, and do you do extra work to stay off scandal in the industry?

I love being myself, I hate competing with people. I also discovered that once you have too many female friends in the industry, they will push you to do too many things you don’t have the desire to do. So, that is why I mind my business and many call me “The Controversial Free Actress”. I am just here to enjoy my craft and nothing else, and for me, scandals and controversies are not necessary. When people like you they will like you, and when they desire to hate you, they will hate you, so I am just me.

Are you in any relationship now as a single mum?

Laughs! Yes, somebody’s son will find me one day, according to Tiwa Salvage and thank God, he has finally found me, so just keep your fingers crossed.

Is this lucky man from the industry?

Why can’t you date someone from your industry?

I already told him everything about myself and he is okay with it I don’t want any crisis tomorrow, I have learnt from my mistakes.

Why It Took Me 15 Yrs To Fall In Love Again – Pretty Actress, HABIBAT JINAD (Omojinad) was last modified: October 13th, 2021 by City People

If Govt Is Not Careful, A Greater...