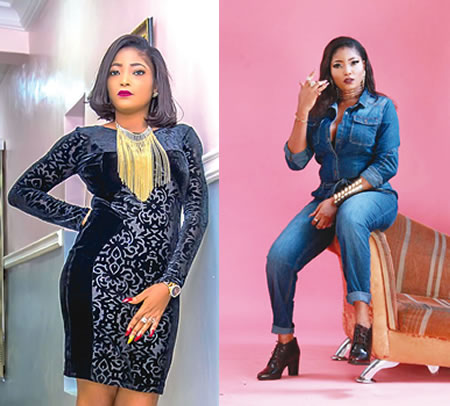 Within the Yoruba movie sector, Habibat Jinad is one of the hottest actresses rocking the scene. She is in high demand by many producers and directors who love the way she interpretes her roles. That is why she has featured in many movies. How does this make her feel, City People asked her recently. “I feel so good and blessed” she explained. “all thanks to God almighty”. She has been acting for quite a while now and City People asked her how her career began.

Where was she born? Where did she grow up and which schools did she attend? “I was born in Kano in 1984, I’m from Abeokuta Ogun State. I went to N.U.D primary school in Abeokuta, I also proceeded to State High schools, Alimosho Lagos state, I did my WAEC in Papalanto High School, Abeokuta, Ogun State. I went to Catering School as well. I’m planning to further my education”.

At what point did she decide to go into acting? “Acting has always been my passion, right from my childhood. And I decided to follow my passion in the year 2007. I’m so happy I did”.

Did she train anywhere? Yes, I trained under Afeez Abiodun (Owo) Group in the year 2008 and I graduated by the grace of God under him in the year 2010”.

Has she produced any movie of her own? Yes! To God be the glory I had produced 4 movies, Omokomo, Ikulokunrin, Oba Meji not out yet, Anjola was released the last year 2017. I’m planning on another one by the grace of God.

Who are those she looks up to in the industry? “I only look up to God (smile) although I have so many role models in the industry like Omotola Jalade, Madam Saje, Bimbo Akintola, Ayo Adesanya, Odunlade Adekola and so on…

Why Pretty Actress, HABIBAT JINAD Is In Hot Demand! was last modified: September 17th, 2018 by Reporter