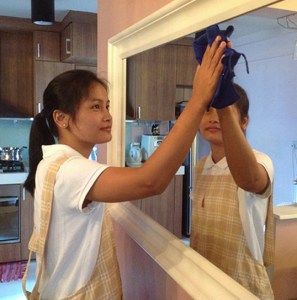 Have you noticed the latest fad among rich Nigerian rich men and women celebrities? Do you know that most of them no longer employ   Nigerians and West Africans as Housemaids fondly called Omo Odo.

Well, permit us to tell you that they now employ white maids who are “Filipinos”; it’s the vogue among Lagos and Abuja elite to hire Filipinos as either Cook fondly called Chef or house assistant as Nannies.

Yes, they source housemaids from far away Philippines.

The likes of Senator Florence Ita Giwa, Senator Daisy Danjuma, Otunba Subomi Balogun, Chief Kesington Adebutus, Sayaveth Interiors boss to mention a few are among many, who never denied that their housemaids are Filipinos or white. The maids are always neat, and they have a special uniform.

It is suspected that the rich decided to employ Filipinos owing to incessant death of many rich celebrities in the Nigerian handmaid.

The case of a Cameroonian Maid who was sentenced by State High Court in Igbosere Leudjoe Koyemen Joel, to death for murdering her Nigerian employer, Mrs Dayo Adeleke is still fresh in public domain. What about a case of a Nigerian maid who allegedly killed his employer who was 89.

The Lagos State Police Command’s Spokesperson, DSP Bala Elkana, said in a statement that the suspect committed the murder about 3 am on June 20. The Lagos State Police Command arrested the 22-year-old domestic staffer, Joseph Ogbu, for allegedly killing his employer and the 89-year-old mother two days after being employed at Surulere area of Lagos.

Many may think that employment of Filipinos is a show of affluence, as many rich Nigerians pay as high as 1,000 dollars per month to get a Filipinos as a housemaid. These means they earn over N350k per month. Another source who doesn’t want his name mentioned recalled that you could get a housemaid and nanny from Philippine as low as 500 dollars which is close to N175k per month.

Why do you think rich Nigerians will pay between N170k to N350k per month to a house help when they could a Nigerian house help for N30 to N50k?

Well, let’s gist you that aside the security issues associated with Nigerian maids, there are also other reasons the rich will rather pay Filipinos Triple amount in dollars.

The number one reason for employing Filipinos is that it shows status. There is a status symbolism that comes with employing a white maid.

Another reason is that  Filipino maid does not come cheap, only those who are many boys can afford them.  They took care taken care of house chores and family members.

Communication is always key to a good employer-employee relationship. Fights, misunderstandings and disagreements often happen because of communication failure. Nigerian rich who cannot speak French Faces herculean task comminuting a maid from the republic of Benin.

Most Filipino domestic help speak good English and they are good enough to understand their bosses instructions and carry them out. An average Filipino speaks and writes standard English by age 12. If you are an employer, who hates repeating yourself in conversations, then Filipino maids are good for you. Most Filipinos speak ‘Taglish’. This is a variety of English language steeped in their dialect in little properties of distinction from pronunciation,  and rhetorics. It means that sometimes they are not perfect, communication, but they are far better than French-speaking maids.

Filipinos are regarded to be resilient, warm and friendly around the world. These characteristics are accompanied by Filipinos being very sociable and family-oriented. Most of them take the families they are serving as their families and, therefore, give their bosses the same amount of care and love they give to their own kith and kin cleaning and taking care of the household like their own.

Besides, Filipino helpers are said to be very versatile and could handle difficult tasks. From cooking, laundry to taking care of the children or elderly, and cleaning the house all of these could be done by a Filipino when accompanied with good guidance and training

Generally, Filipinos are warm and approachable and desire the same from their employers.

Why Rich Nigerians Employ Filipinos As HousemaidsAnd They Pay Them In Dollars was last modified: November 21st, 2019 by Abiola Orisile

Meet The 19 Northern 1st Ladies We Don’t Talk About