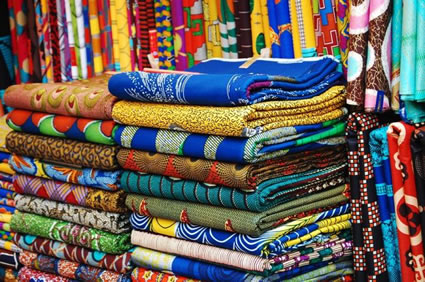 Have you noticed the latest fad on Nigeria’s social scene? It is how a lot of ladies now wear 3 to 4 “ASO-EBI” for just one event. Let us also quickly tell you that the name for that latest trend is not `aso-ebi“, `it is called aso-ijo`(special dress for members of inner caucus). That is one of the conspicuous features at most parties.

Are you wondering how they achieve this? Their cars are run like a mobile shop, which serves as the changing rooms for the 3 attire for one party. They also have their make-up artists on stand-by, who handles their make-up and makes sure it complements the new attire being spotted. Did you ask  why they have make-up artists on standby? This is because aso-ebi doesn’t come in one these days for parties. It usually comes as one aso-ebi and others as aso-ijo. Though, the history of Aso-Ijo is not complete without mentioning the great influence “Aso-Ebi” has on the fad “Aso-Ijo”.   May be we should first fill you in on the history of aso-ebi in Nigeria.

The history of Aso-ebi can be traced back to 1960s or the late 1970s when imported lace and George were incorporated into Nigerian fabrics and they became popular items. Pronounced  as ASHO EYBEE,   it’s Nigerian outfit made from matching fabrics to be worn by a group of people to a party, wedding, or naming ceremony. In Nigeria, during parties, you see people wearing the same clothe. It is called aso ebi. Aso Ebi literally means family clothe. Aso-ebi is a phenomenon seen at Nigerian events in which groups of people wear the same clothes to indicate their close relationship with the celebrant. These days, with so many gorgeous fabrics available, and in colours that span the spectrum, it’s easier to pick winning aso-ebi combinations for your occasion.

Aso-ebi in recent times has become a city phenomenon that has been absorbed in other West African cultures. Dealers of imported and locally produced textile materials have also benefited from the boom in demand for uniform dressing. Some textile dealers offer consultation services and bulk rates for the choice and cost of the dresses and fabrics. While the prices of fabrics could be affordable, the aso-ebi practice is still sometimes used as an identification of affluence, some wear expensive embroidery and extra layers of clothes, whereas others, who could not afford a whole outfit, add only matching tops and head coverings.

The history of Aso-ijo started in Lagos 5 years ago, when a popular society woman threw a classy wedding for her son. Her son married the daughter of a popular Lagos Fabric merchant and aside the regular aso-ebi, which was picked, they decided to have a special clothe, which was tagged “Aso-ijo”. It was a yellow “HOH” back then and it was sold to only 50 of their friends. The beautiful nuptial of that day has since been used as yard stick for many, who do not only want to look their best, but want their event to be classy and most-talked about.

Many Nigerian high octane parties have now taken it to a higher level as they now make sure some of their friends wear 3 or more “aso-ijo” for one party.

Just a few weeks ago, Oil and Gas Magnate, Otunba Demola Shabi, had a classy burial for his mum in Ijebu-Ode and a special aso-ebi was picked for the event. Many of the guests were stunned again when they saw selected friends of his wife, Alhaja Morufat Kalejaiye in another luxury lace. That was their ‘aso-ijo’. It was rocked by only 50 of her inner caucus friends.

Penultimate weekend, Otunba Dapo Alli Balogun’s son got married. It was a blush pink aso-ebi that was picked. It was what was spotted by many of their guests until a few of his friends wife, Bukola Alli Balogun, came in white fabrics. They later changed into blush pink and towards the end of the event; they rocked the burnt orange lace as ‘aso-ijo’, which was supplied by Morkal fabrics.

What are the benefits of having aso-ijo or rocking these 3 different fabrics for one party? It adds glamour to the event. It also shows that some of the friends are closer to the celebrator than others. That is why some will do anything to spot this ‘aso-ijo’. Some even go as far as asking, is this the only fabric for your party?

A top Lagos fabric merchant, Mrs. Sola Amodede, speaking on the issue said that the aso-ijo fad had come to stay. In her words, “it doesn’t only add glamour to the event, it shows solidarity and support to the celebrator. “Yes, I sometimes wear 2 attire for one event. When my friends want to have a party, they will pick 2 to 3 fabrics.

One is seen as general aso-ebi, while the others are for  members of inner caucus. We sell it  only to close friends. We even make sure only a few persons know about it. If it is common like aso-ebi, it won’t make the waoh effect. Don’t forget that aso-ijo is always more expensive than aso-ebi, “she revealed.