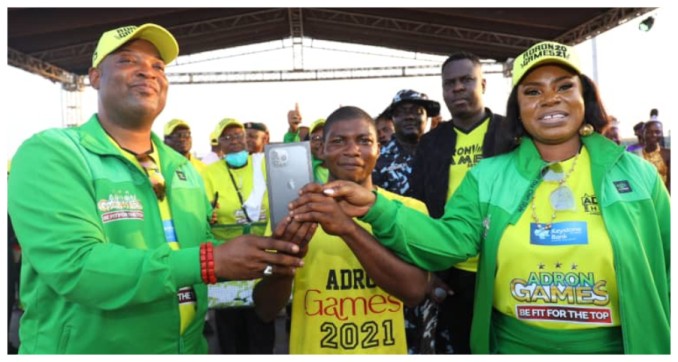 Adron Homes and Properties, a leading property company, held the 5th edition of the annual Adron Games at the prestigious Gateway Stadium in Sagamu. And for 3-days, the entire community stood still for the historic event.  The event was held from November 18 to November 20, 2021 amid glitz and glamour as activities featured a galaxy of renowned personalities from sports, entertainment and lifestyle sub-sectors of the economy.

Adron Games, according to the organisers, does not only aim at making sure the firm’s staffers are physically fit, but also to sensitise the general public on the importance of exercise, in relation to healthy living and productivity. This year’s edition, tagged: ‘Be Fit For The Tops’, was held from November 18 to November 20, 2021, at the Gateway Stadium, Sagamu. The programme featured several sporting activities as well as many superstars both in the sports and entertainment industries.

For the three days that the programme lasted, the venue of the amazingly-packaged event came alive. Signs that the games were on could be felt right from the main gate of the Isale Oko of Sagamu down to the venue, as different banners and promo materials were planted at strategic locations. To say that the whole programme was colourful would be an understatement; it was impressive. Every object in the vicinity of the venue turned Lemon and White, which are the official colours of Adron.

The 5th edition of the ADRON 2021 Games was a pure show of entertainment and carnival that would remain in the memories of the spectators for years to come.

The fans, who came en masse to grace the ceremony were thrilled with widely varied tastes of entertainment and sporting activities of a world-class level.

The colourful ceremony, which took place at the Gateway International Stadium, Sagamu, Ogun State, from Thursday, November 18 to Saturday, November 20, 2021, saw the high and mighty in sports at the graciously packaged event.

The yearly games which are put together by ADRON homes for its members of staff nationwide is aimed at promoting and implementing a healthy workforce policy, while also enhancing unity and bonding among members of staff.

The sporting event, which was officially declared opened by the GMD of ADRON homes and properties GMD, Are Adetola EmmanuelKing, was a special one, aimed at promoting and implementing a strong healthy workforce, which are very key to a successful business or organisation.

“Sports are very powerful tools that unite the world and are very inevitable in every sphere of life, that is why the ADRON games are very important.

“The ADRON games will continue to grow bigger and stronger every year and in future; it would be like an Olympics event”, EmmanuelKing stated. Meanwhile, the parade which was the highly coveted event that attracted a cash reward of one million naira was contested by 8-teams, representing the company nationwide. Members of staff across the country, thrilled fans & supporters with delightful performances and displays.

Meanwhile, the women’s soccer competition kicked off with the Eko contingent beating the Western contingent 2-0, while a novelty game between Remo North and Sagamu Utd ended in 2-1in favour of Remo North.

The Lagos contingent led and went away with most trophies in all the games, while Ibadan, Oshogbo, contractors, and the northern regions also won big as individuals and as teams. Aside from the participants of the sporting games, spectators also had the opportunity to win big at the event. Raffles tickets were sold for between one thousand and two thousand naira, but the gifts that were won were far bigger than expected.

Staffers of the Olabisi Onabanjo University Teaching Hospital were also on standby to give emergency treatment to participants in case of emergency.