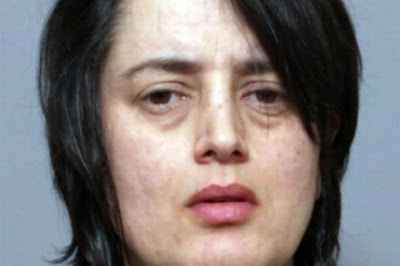 Katie Leong has been sentenced to life imprisonment after her helpless boyfriend was left blind and ‘deeply disfigured’ by the horror attack woman who tried to kill her boyfriend by pouring acid over him while he slept has been jailed for life.

Daniel Rotariu, 31, suffered burns to a third of his body and the loss of sight in both eyes after the horror attack committed by Katie Leong at their home in Tuner Road, Leicester last July.

“Jealous” Katie, 52, attempted to incriminate her ex-partner for the “brutal” assault, Leicester Crown Court heard. But former boyfriend Mark Cummings was found not guilty by a jury.
During the trial, Rotariu said he began his relationship with Leong in December 2015.

He said the couple argued frequently and recounted how she forced him to delete Facebook from his phone in an act of jealousy and wanted him to get a tattoo of her name to prove his love.

Jurors were told that on the day of the attack, he had argued with Leong during the day and went to bed at about 8pm, only to be woken in the middle of the night by a “burning” feeling.
Rotariu said he saw a “silhouette” in the room before he lost his sight, but was unsure who the person was.

Cummings, 46, admitted being in the house on the night of the attack but was hiding in Leong’s room because he was not supposed to be there, the court was told.

He said he bought two containers of sulphuric acid at 96% concentration for Leong, despite her “fixation” with acid attacks, because he believed it was for a jewellery cleaning business.

He described himself to the jury as “a puppet on a string” and said he did whatever Leong asked, including having her name tattooed over his neck, ring finger and heart in a bid to prove his affections for her.

Following sentencing, Detective Chief Inspector Rich Ward, who led the investigation, paid tribute to the victim’s “strength and resilience”, saying it was “remarkable” he survived the “utterly wicked” attack.
“It is hard to adequately describe the horror and brutality of what was done to him. It is equally hard to accept the chilling lack of concern for him since then,” he said.
“Leong has not shown any remorse – let alone humanity – for what she did.”

Angela Clark, from the Crown Prosecution Service, said evidence recovered from the scene “clearly showed” Leong was the one who “planned and implemented the attack fully intending to kill”.

“In order to avoid being blamed for the attack, Leong attempted to incriminate Mark Cummings, who wanted more than anything to resume their relationship,” she said.

“However, our case was that she was the driving force behind the attack and the jury decided that Mark Cummings was not guilty of attempted murder.”

Bishop Godwin Elomobor Dies At 66 In...