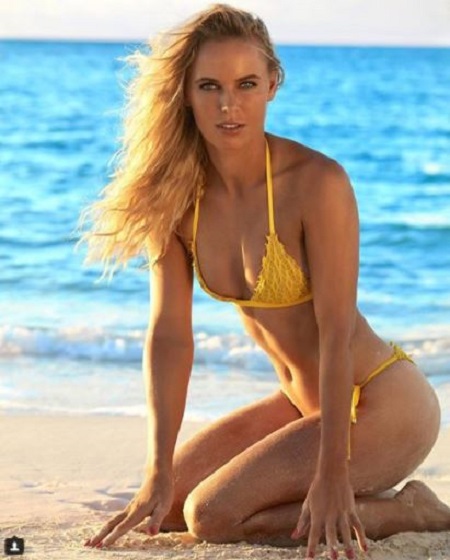 Caroline Wozniacki stunned fans with faultless look as she strips bare for the cover of ESPN, the Magazine Body Issue.
According to The Sun UK, it is a love game for former world No1 Wozniacki, who is the star of this year’s shoot.
The Danish ace is currently ranked sixth in the world following an ankle injury which kept her sidelined for much of last year. The 26-year-old told ESPN: “Last year was rough on me. I’ve never really been injured before, for longer periods of time, and last year was just one little thing after the next.
“It made me realise that sometimes you need to listen to your body and let it heal.
“When you’ve been 12 years on [the WTA] tour, your body just keeps taking a beating and it’s going to break down on you.
“I think the main thing for me is keeping on top of the small injuries and making sure that when I’m back on the court, every time I’m at 100 per cent.”
Wozniacki is back on the court where she is most comfortable, narrowly missing out on three titles in 2017 after finishing runner up on each occasion.
Centre-court may be daunting, but taking centre-stage in ESPN’s revealing shoot must be an entirely different sort of pressure. But Wozniacki, who split from golf ace Rory McIlroy in 2014 after getting engaged, insists spending so much time on TV screens and in the public domain made it easy for her.
She explained: “I was always really skinny until I hit puberty.
“As a girl coming into a woman, that time is always a little bit frightening. At one point I was like, ‘Are they changing the clothes sizes or am I getting bigger?’ I was like, ‘No, for sure the sizes must have been small’.
“I think being in the public eye and getting judged for everything you do and however you look, I think that helped me as well.
“Just saying, ‘You know what? People will have an opinion. Some people will love you, some people will not’.
Wozniacki added: “I rarely stand on a scale, to be honest. When I stop playing, I’m not going to obsess so much about my weight. It’s going to be more about a healthy lifestyle. It’s more about how I feel.”
World Famous Tennis Player, Caroline Wozniacki Strips Completely Naked as She Poses for Magazine Cover (Photos) was last modified: June 28th, 2017 by Arinze Ago