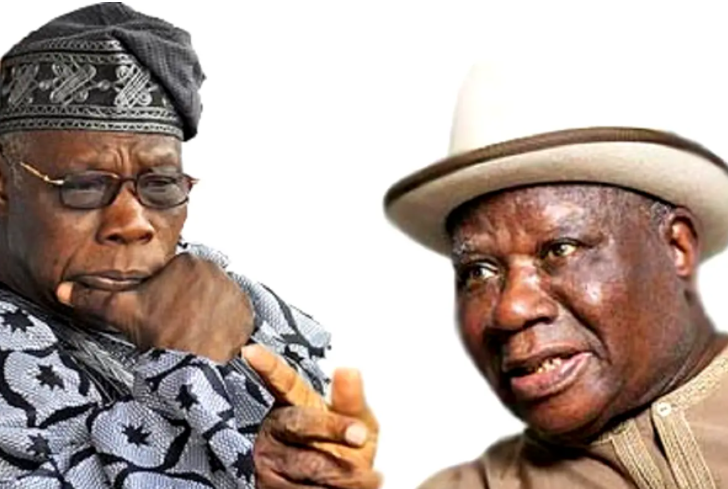 Former President of Nigeria, Olusegun Obasanjo, has blasted leader of the Pan Niger Delta Forum and Chairman of the Board of Trustees, Ijaw National Congress (INC), Chief Edwin Clark.

In a letter addressed to Clark, Obasanjo said the Ijaw leader is uncouth (rude) and “judging him by his own standards.”

Clark had accused Obasanjo of showing hatred towards the people of the Niger Delta region, after the ex-President verbally attacked the National Secretary of the INC, Ebipamowei Wodu, at peace and security parley convened by the Global Peace Foundation and Vision Africa.

In a letter titled, ‘My disappointment over your unprovoked outburst against the people of the Niger Delta region’, Clark accused the former president of double standard on the subject of resource control in the country.

In his response to Clark, Obasanjo warned that he is not anyone’s lackey, telling Clark to choose his words carefully.

“I have never shown any anger, distraught with Niger Delta region nor any part of Nigeria. Some of the languages you have deployed to describe me in your letter are offensive, uncouth and I totally and completely rejected them, I am not inconsistent, hypocritical, unstatesman, and nor am I anybody’s lackey.

“You use your own yardstick to judge others. I hope you think and adjust. Negotiation achieves better results than dictation.

“Revolution for sea-change may rarely happen and then we may continue to languish in frustration and regret with dire judgment in posterity,” Obasanjo writes.

Obasanjo is still reprimanded to this day for ordering soldiers to level or destroy Odi community in Bayelsa State in 1999.

Clark to Obasanjo: Your disdain, insincerity to N’Delta people have not stopped