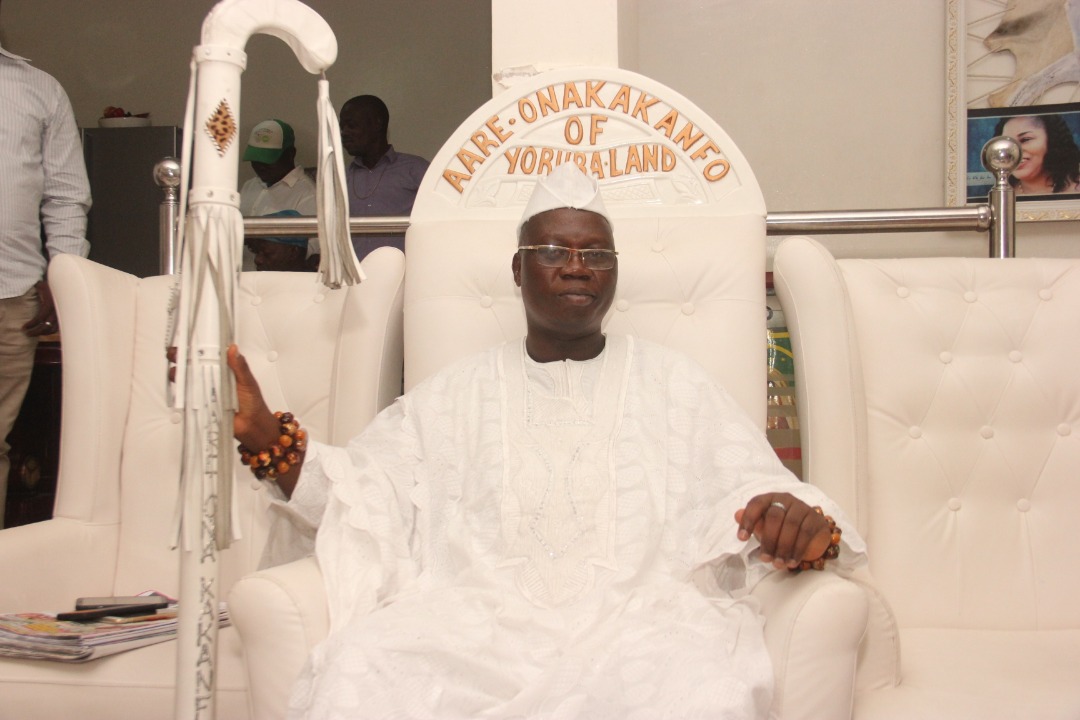 On Wednesday, 9th January, 2019, the Aare Onakakanfo of Yorubaland, Iba Gani Adams, launched 2 books in partnership with the Nigerian Union of Journalists (NUJ).

The event took place at Sheraton Hotel,  Ikeja, Lagos. It attracted an array of politicians, Movie stars, members of  Oodua People’s Congress and other notable personalities. They all came to celebrate the Aare, as he clocked a year as Yoruba generalissimo.  Two books were launched; the first is entitled: Iba Gani Adams (Aare Onakakanfo of Yorubaland), while the second one is entitled: Voice of Media, Voice of People.

The books were written to help promote Yoruba culture.  It will also help many to understand the concept of restructuring, which is the only way out of the various crises in Nigeria, according to Otunba Gani Adams.

He started by welcoming everyone to the auspicious event, which was organised by the Office of Aare Onakakanfo of Yorubaland in partnership with the Nigerian Union of Journalists.

He said two books would be launched: Iba Gani Adams and Voice Of Media, Voice Of People. He also appreciated the Lagos State Chairman of NUJ for his efforts. He said he never expected anything less because the Chairman is an excellent Journalists.

He also gave kudos to the members for their tiredless efforts to make the event a successful one.

He said that it’s   going to be an eventful week for the office of Aare as it would celebrate his 1st Installation Anniversary. There will be a football match, book presentation, chieftaincy titles for 21 prominent persons, a reception and presentation of document during the course of the week.

During his speech, he mentioned his 14 predecessors. and said that the job of Aare is to look for trusted Yoruba patrons to ensure a successful reign and also to promote Yoruba culture.

To him, the only way out of the various crises in Nigeria is restructing. He said restructing means re-organisation. We need re-organisation in our country”. He further said that, it was not possible to sit in Abuja and control what are happening in Osun, Zamfara, Kogi and other states.

He prayed that God should  gives us leaders who will guide us well. And  he expressed profund gratitude to the organising committee, the National Executive of Oodua People’s Congress and to all distinguished guests.

Lagos Chairman of  NUJ, Dr. Qasim Akinreti, was ably represented by his vice. He prayed for peace, unity and progress in Yorubaland and urged everyone to observe a minute silent prayer for all Journalists who lost their lives while they were doing their jobs at the APC’s rally in Lagos last week. He recognised the presence of Maye of Yorubaland, a former President of Nigerian Guild of Editors, and every other guest seated. He mentioned that the book was produced to ensure that the next generation realise the importance of Yoruba culture and respect for elders.

He encouraged everyone to buy copies of the books and keep them in their homes, urging that they should also be read in schools.

He expressed how honoured he felt to be at the event and praised the spiritual head of all the Yoruba, Iba Gani Adams. He entitled his lecture: The Unique Role Of The Aare In The Development of Yorubaland. In his speech, he said that Aare’s domain starts from Kogi State to Lagos State adding that he has traditional authority to make anybody his chief. He stated that it was important that we go back and study history. And it is important for everyone to buy and read the book launched by Aare and we should not forget our source.

He prayed that during Aare’s tenure, every crisis and curse in Yorubaland would stop. He said everyone should keep praying for Aare that the Lord should guide his steps. He urged all the Obas to always support Aare. He said that the Aare we have now is an “Aare with a purpose”. We shouldn’t say he is still young. He described Aare as a warrior.

Before the book review, there was a five minutes cultural dance presentation. The dancers were dressed like hunters, they sang and danced to praise Aare Onakakanfo, Otunba Gani Adams.

The first book review was done by Prof. Shiyanbola Oyeweso. He reviewed the book, entitled: Iba Gani Adams (Aare Onakakanfo of Yorubland). He said that the book had 200 pages and  it was written by 7 persons and the two major writers are: Femi Akinola and Dr. Kazeem Akinreti.

He revealed that the book is not only about the history of Aare Onakakanfo, it gives more knowledge about Yoruba culture. “It is also about man’s ability to succeed all odds. The book is a mine of information and he urged everyone to buy a copy. He further said that the book was well referenced, technically produced and could be read easily.

Prof. Tunde Akanni reviewed  the second book, entitled: Voice Of Media, Voice Of People. He said that the book didn’t only entail the historical background of Iba Gani Adams, the publication was a rich resource material and it brought our attention to things Journalists disregard and use of English by the editorial department.

UNVEILING AND Launching OF THE BOOKS

The unveiling was led by Iba Gani Adams and other dignitaries like, Maye of Yorubaland,  Prof. Tunde Babawale, Prof. Hamzat, Hon. Adewale Ayodele, Chairman Oodua People’s Congress, and many others.

Maye of Yorubaland was the first person to launch the books, followed by Alh. Ibrahim Buago (Director of Finance Nigeria Army), Hon. Ayodele Adewale, Olori Oluwo of Reformed Ogboni fraternity, Mr. Adeyinka Amosu, Baale Allen/Ikeja, Prof. Omoseinde and his friend, Barrister Babatunde, Prof. Kolawole Rahim to mention a few. They all bought copies of the books  because  everybody should have it in their homes and schools.

Being a genius doesn’t give you the excuse to be that sick’ – Don Jazzy slams R.KELLY.