Home News $9.6b Judgment Against Nigeria: Late President Yar’adua Was In Coma When Deal Was Signed
News 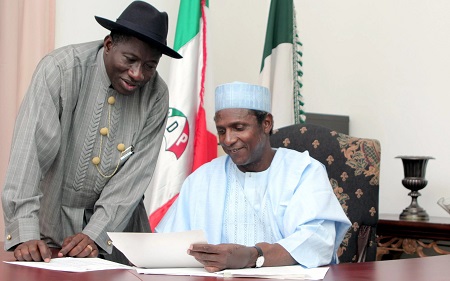 MORE riddles have beclouded the 2010 ill-fated Gas Supply and Processing Agreement (GSPA) which led to the award of a $9.6billion judgment against Nigeria.

Preliminary investigation by the Economic and Financial Crimes Commission (EFCC) indicated that the contract was signed by the Federal Ministry of Petroleum Resources at the time the late President Umaru Yar’Adua was already in a coma.

The anti-graft agency is probing the likelihood of the forgery of the signature of a former Minister of Petroleum Resources, Dr Rilwan Lukman, who was known for his high ethical standards.

Detectives are after a former legal director of the Ministry of Petroleum Resources, Mrs Grace Taiga, who was central to the negotiation between the Federal Government and P&ID.

Also, a raid of an office believed to be that of P&ID in Lagos and Abuja at the weekend left the EFCC detectives stranded because there were no signs of the presence of the company in Nigeria.

It was learnt that the EFCC team discovered from the Corporate Affairs Commission(CAC) that there is another firm registered as P&ID Nigeria Limited with two Nigerian directors.

It was learnt that when one of the directors was called on the phone last Wednesday, he admitted being on the board of P&ID Nigeria Limited and agreed to meet with the EFCC team on Friday.

The director, however, had been unreachable to the operatives.

The second female director is said to be a security agent in Qatar.

According to sources, EFCC investigators preliminary findings revealed that the contract was shrouded in secrecy.

The highpoint of the initial investigation is the fact that the contract was signed when Yar’Adua was in coma.

The former President was flown to Jeddah in Saudi Arabia in November 2009 for treatment of a heart condition.

But after three months in Saudi hospital, Yar’Adua was brought back to Nigeria and he remained incommunicado till his death on May 5, 2010.

The source said: “So far, detectives have discovered that the GSPA was signed on January 11, 2010, when Yar’Adua was already in a coma. There was no evidence of presentation to the Federal Executive Council(FEC).

“They took advantage of Yar’Adua’s illness and vegetable state. Even ex-President Goodluck Jonathan, who took over as Acting President cannot say much about it because the agreement was done in a suspicious manner and limited to the Ministry of Petroleum Resources.

“The whereabouts of a former Director of Legal in the Ministry of Petroleum Resources, Mrs Grace Taiga was unknown. Our detectives have not been able to get across to her. We need her assistance. She superintended over the GSPA six months to her retirement.

“We are probing clues that Lukman’s signature might have been forged for the deal. He was a meticulous and an experienced international stakeholder in OPEC. Those who worked with him expressed doubts that he would sign such an agreement without FEC approval.

“We are suspecting a case of forgery. We will do a forensic analysis of all relevant documents.”

$9.6b Judgment Against Nigeria: Late President Yar’adua Was In Coma When Deal Was Signed was last modified: September 3rd, 2019 by Damilare Salami