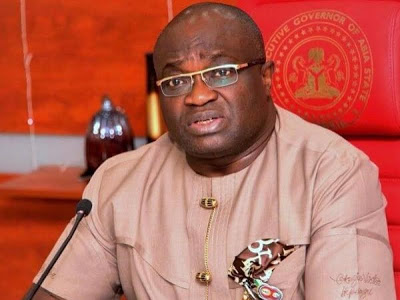 Governor Okezie Ikpeazu of Abia state has dismissed the state executive council, including commissioners and special advisers as well as senior special assistants.

The Permanent Secretary, Government House, Mr. Onyii Wamah, announced the dissolution in a statement posted on the government’s website on Friday night.

According to the permanent secretary, the governor retained his Chief of Staff, Mr. Sunny Nwakodo, Commissioner for Finance, Mr. Obinna Oriaku and Commissioner for Justice and Attorney-General of the state, Chief Umeh Kalu (SAN).

No reason was given for the dissolution but there are speculations that it was after the commissioners and other officials presented their scorecards at a forum attended by the governor between May 28 and May 29.

The statement also announced the appointment of three special advisers to the governor, including the former Commissioner of Works, Mr. Eziuche Ubani, who was appointed as the Special Adviser on Works and Project Monitoring.

Others were Mr. Emma Nwabuko and Mr. Solomon Ogunji, who were appointed as Special Adviser/Personal Secretary to the Governor and Special Adviser on Urban Renewal, respectively.

Last month, Governor Rochas Okorocha of Imo State also dismissed his entire cabinet members in what was said to be a strategic bid to restrengthen his administration

Why I Stopped Taking Alcohol Over 27 Years Ago- LAGOS Businessman, Aare KOLA OYEFESO