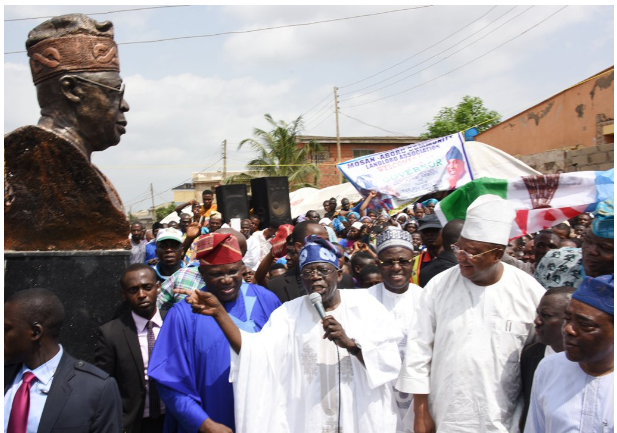 The All Progressives Congress (APC) national leader, Asiwaju Bola Tinubu, has hailed Akinwunmi Ambode, governor of Lagos state for his “sterling performance” since he took over the mantle of leadership in the last 22 months.
Tinubu while speaking at the commissioning of network of roads, link bridge and health centre in the Alimosho area of the state as part of activities to mark his 65th birthday, described Ambode as not only a thinker but a doer.
He said the governor had been delivering on the promises made to the people.
“I want to say thank you because experience is a great teacher and I am experienced. I am on the spot and I have watched things in Lagos since my tenure ended,” he said.
“I was worried hell when you (Ambode) took over, not because of your credibility, character or capacity, but because however wise or smart a man is, if there is no resources to back the ideas, production would be zero, progress would be zero.
“When you (Ambode) took over, I know you inherited a burden of debt. The debt profile of Lagos was high, I was wondering how you will reengineer and face the challenges to make progress.
“Today, I can see your report card, you have scored well, and you have shown prudency especially in the judicious use of resources of the state.
“You didn’t disappoint us. Ambode is silently achieving, meticulously planning, religiously executing and brilliantly giving results for Lagos State,” the former Lagos governor said.
Tinubu said all over Lagos, the results of good governance was being felt by the people, and wished Ambode sound health and wisdom to continue to lead the state.
“All over Lagos, we are seeing the results. At Oshodi, on our way down here, you can see what is happening there, that place is a construction site. It used to be a den of robbers but what is going on there now is developmental activities for the benefit of the entire country,” he said.
“Ambode is very quiet, very peaceful, not a noise maker, but he is delivering on the job.
“Today, you (Ambode) have given me a good birthday present. This is a great opportunity for me to be very proud again. Therefore, if we can continue in this direction of infrastructural development in the manner Governor Ambode is moving, Lagos will soon match international states or country anywhere in the world.”
Ambode described the event as a historic day in the life of the people of Alimosho and the state in general.
He recalled his visit to the Aboru area in March 2016, saying aside the state of the road which was totally unacceptable, there were reports of series of deaths and fatal accidents caused by the presence of a valley.
He added that he immediately directed that work should commence in the area.
“Exactly one year after, we are here to keep our promise to the good people of Aboru, Abesan and other communities and reaffirm our commitment that no community or area will be left behind. Every Lagosian counts. We are a government of inclusion,” he said.
He said the 480 metres bridge linking Aboru to Abesan, both in the Agbado Oke-Odo local council of Alimosho local government area would significantly ease the burden of travel between the two communities by reducing travel time and eliminating the risks associated with its non-existence.
Ambode said aside the bridge, additional adjoining inner roads to create an efficient road network that will aid connectivity permanently were also constructed.

‘Ambode Is Not A Thinker But A Doer’ – Tinubu Scores Lagos Gov High was last modified: March 30th, 2017 by Damilare Salami