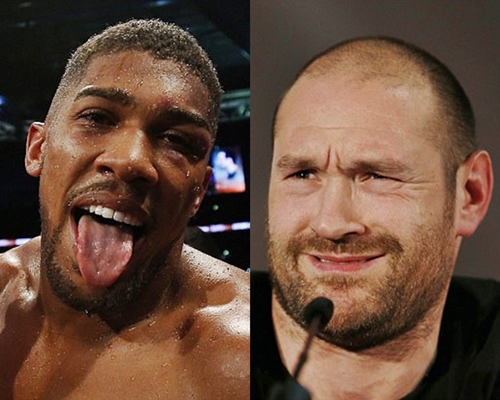 British professional boxer, Tyson Fury, who has held the Ring magazine heavyweight title since 2015, after defeating long-reigning world champion Wladimir Klitschko, has sparked a new row by criticising current unified heavyweight world champion, Anthony Joshua.
According to Dailymail Sports, the bad blood comes after Nigeria’s Anthony Joshua called out Fury by demanding a title showdown in the post-fight interview in the Wembley Stadium ring following his n 11th-round stoppage in April.
Tyson Fury, who is a self-styled ‘Gypsy King’, responded in his own imitable way by stirring the pot in a bizarre 2-minute rant against Joshua on his Instagram account.
He wrote on a video on Instagram; “Addressing the AJ call out,
“U need to fight me cuz ATM I’m still lineal champ! Been out of boxing nearly 2 years so that should make it fair on the others. I really don’t believe that AJ can lace my boots up, I want to come back & see how good I am even with the time out. Me vs AJ is the biggest fight in boxing without a doubt!
“If this fight isn’t made it will be like Lennox Lewis & riduc bowe. Now there is new challenges I can motivate my self again. Wilder & Aj & Parker even povetkin theses are the fights I want. Let’s make this happen. Let’s make boxing great again.”
With a date yet to be set for the potential bout betw be set for the potential bout between the two heavyweights, Fury addressed Joshua directly on the social media platform, saying: ‘You’re a big bum from the streets of London.
‘You’re a big useless dosser from the streets of London bullying little people – you’re a big bullying bum.’
Fury resorted to the personal abuse of the popular 27-year-old Joshua, after reacting badly to the Watford-born fighter’s recent criticism of his own world title win against Klitchsko that took place back in November 2015.
The 28-year-old 6ft 9in heavyweight boxer, whose last professional fight was in that victory against Klitschko, blasted Joshua, saying: ‘I see AJ talking [in a way that will] get a smack again – saying my fight was boring with Vladimir.
‘Better to win and be boring than to get dropped all over the floor and scraping a win.  I never got punched – you [Joshua] nearly got carried off the canvas. Winning is winning. Whether you win by an inch or a mile – it’s still winning.’
Anthony Joshua is a Useless Dosser on the Streets of London – Tyson Fury Draws Battle Line as Heavyweight Fight Nears was last modified: June 21st, 2017 by Arinze Ago

El-Rufai Can’t Contest For President In 2019, He Failed In Kaduna – Senator Shehu Sani