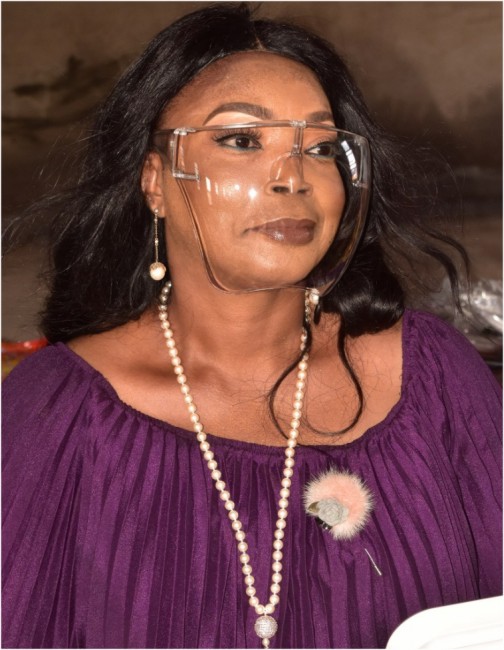 •As Her TOWER Foundation Gives Out Gifts To Over 500 Women

On Saturday 13th February 2021 Tower Foundation, a prominent NGO in Ogun State took its goodwill to Yobo Village in Abeokuta, Ogun State. It put smiles on the faces of the villagers. The Foundation embarked on total rehabilitation of Yobo Medical Health Centre and extended its hands of benevolence to over 500 women in the village and its environs as well as gave free Medical Check-up for all and sundry.

The Founder and President of Tower Foundation is Barr. Oketola Olorunwo Sam-Obaleye, daughter of the highly celebrated and respected man of God, Primate Omolaja Olorunwo of Olorunwo Cathedral Church located at Ifako, Gbagada in Lagos.

Barr. Oketola the beautiful lady gave reasons for their choice of projects in Yobo Village. She said her father called her attention to the dying need of a befitting health centre in their hometown as the dilapidated structure of the one on ground which was an eye sour was long abandoned and infested by bats among other scary animals. The foundation quickly acted on this and on Saturday 13th February, the health centre was commissioned to serve its purpose after its full rehabilitation. By this soul act, the Medical Centre was brought back to life and ready to cater to the health needs of the people in Yobo Village and its environs.

The foundation has soft spot for the womenfolk in a bid help fulfil women destiny. It reached out to over five hundred beneficiaries who are majorly women from the village and its environs. Each of them was given clothes, food items, mosquito treated nets, and beverages.

To add icing on the cake as the event winds up, the foundation did medical check-up for villagers as physicians on ground were tested on Glucose level, sugar test, HIV status, Blood Pressure while advice was given to the people on health and nutritional diets as well as against living adverse lifestyle. Meanwhile, those whose condition needed quick medical attention were referred to appropriate centres for treatment.

The arrival of the much-celebrated clergy, Primate Omolaja Olorunwo with his entourage which includes Rt. Rev. Dr. Adetubo Adesoji Aderemi among other notable clergies in town changed the atmosphere, as villagers were thrilled with joy to receive them.  Meanwhile, Primate Olorunwo commissioned the Borehole dug by dedicating it to God and for the service of humanity. He further went round the health centre with the people to assess the newly renovated building and its infrastructure.

Adding glamour to the event was Nollywood artiste, Kabira Kafidipe who co-anchored the distribution of materials with other members of the foundation. She thrilled the people with her highly inspiring Yoruba songs on charity and why we all need to adopt such act. The distribution of items was done at His Eminence Omoloja Olorunwo Hall at the Primate Omolaja Olorunwo Estate, in Yobo, Ogun State.

Worthy of note among the villagers who graced the event was the long-aged social-cultural group called “ Egbe Bomodeoku Agba Ni Da” as members were seen looking stunning in their colourful Ankara attires which resonate with originality.

A cross-section of some of the villagers revealed how happy they were with what Tower Foundation has done for them; touching their lives. They however prayed for the organization and founder that God would continue to be with them and enlarge their coast.

Tower Foundation is an NGO launched in 2006 by Sen. Ibikunle Amusu. It is passionate about the female gender and would do it best possible to put females in a better frame of mind via Empowerment of women and the girl child. The foundation had benefitted many villages in Abeokuta parts of which include Aiyetoro, Joga, Ake providing boreholes, giving things out to people and by extension putting smiles on faces in rural communities. The organization has promised to bring a motherless baby home, a shelter homes, and skills acquisition centre to Yobo village very soon. By doing these, more lives would be transformed in the village and its environs.

READ ALSO: 6 MISTAKES NOT TO MAKE ON YOUR 1ST DATE

6 Mistakes Not To Make On Your 1st Date